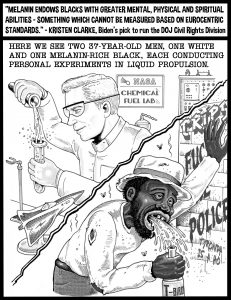 Last week, doddering President-Elect Joe Biden nominated a black female lawyer named Kirsten Clarke to head the Department of Justice’s Civil Rights Division. Referring to the Brooklyn-born daughter of Jamaican immigrants as “one of the most distinguished civil rights attorneys in America,” the CIA robots who control Biden’s cyber-brain transmitted the following words through his thin, dry, cracked lips:

“The Civil Rights division represents the moral center of the Department of Justice. And the heart of that fundamental American ideal that we’re all created equal and all deserve to be treated equally.”

Responding to her nomination, Clarke — whose forehead is the size of a watermelon — said, “If I am fortunate enough to be confirmed, we will turn the page on hate and close the door on discrimination by enforcing our federal civil rights laws.”

It is unclear whether Biden was aware that in 1994 while a student at Harvard, Clarke proclaimed that blacks were genetically superior to whites due to their relative abundance of melanin. So much for “that fundamental American ideal that we’re all created equal.”

In a 1994 letter to the Harvard Crimson that was cosigned by Clarke and a woman named Victoria Kennedy and titled “Blacks Seek An End to Abuse,” Clarke objected “to those who defend The Bell Curve” by urging them to “please use the following theories and observations to assist you in your search for truth regarding the genetic differences between Blacks and whites.” (Even back then, she was capitalizing “black” while making “white” lowercase — it took the Associated Press more than a quarter-century to catch up with her.) Here is what Clarke and Kennedy depicted in their letter as the “truth”:

One: Dr. Richard King reveals that at the core of the human brain is the “locus coeruleus” which is a structure that is Black because it contains large amounts of (neuro) melanin which is essential for its operation.

Four: Some scientists have revealed that most whites are unable to produce melanin because their pineal glands are often calcification [sic] or non-functioning. Pineal calcification rates with Africans are five to 15 percent, Asians 15 to 25 percent and Europeans 60 to 80 percent. This is the chemical basis for the cultural differences between Blacks and whites.

Five: Melanin endows Blacks with greater mental, physical and spiritual abilities–something which cannot be measured based on Eurocentric standards.

So much to unpack!

Dr. Richard King is the author of Melanin: A Key To Freedom, a paperback book described thusly on Amazon:

A Study of Ancient African History reveals an early African definitions of the human melanin system as a whole body Black Melanin System that serves as the eye of the soul to produce inner vision , true spiritual consciousness , creative genius , beatific vision , to become godlike , and to have conversation with immortals . The purpose of ancient education was to provide knowledge and development of the will of the student that allowed salvation of the soul from the fetters of the physical body. . . .

King was pushing what is known as “Melanin Theory” — a misnomer used to describe something that is merely a wacky hypothesis.

This half-baked “theory” has also been peddled by Frances Cress Welsing, whose The Cress Theory of Color-Confrontation and Racism states:

The quality of whiteness is a genetic inadequacy or a relative genetic-deficiency state or disease upon the genetic inability to produce the skin pigments of melanin which are responsible for all skin coloration. . . . The. . . psychological reaction of whites has been directed toward all people with the capacity to produce the melanin skin pigments. However, the most profound aggressions have been directed toward the Black, “nonwhite” peoples who have the greatest potential and therefore are the most envied and the most feared in genetic competition.

The Melanin Theory was also pushed by Leonard Jeffries, another superstar of early 1990s black-supremacist folderol who divides the world into Ice People and Sun People and wrote that melanin enables blacks to “negotiate the vibrations of the universe and to deal with the ultraviolet rays of the sun.”

The Melanin Theory persists to this day in the blog-droppings of mentally handicapped black-supremacist females who give themselves handles such as “Queen Mother Goddess” [republished exactly as it was typed]:

Melanin is a liquid that is produced and secreted by the pineal gland during the night time. . . . The 3rd eye is also called the pineal gland. . . . MELANIN IS LIFE ITSELF! && here’s why. Melanin is the material or immaterial of what makes up not only EVERY living THING or BEING on this planet BUT it’s also what makes up the UNIVERSE, STARS AND PLANETS in which we know of! It IS the DARK MATTER that scientist have come to discover. It is the black holes that NASA has discovered in space. . . . Without MELANIN, LIFE ITSELF would be NON-EXIST and it would only exist in the primordial waters in which we sprung from. . . .So, let’s go over the basic fundamentals of the 3rd eye, Melanin and the Pineal Gland. We know that the pineal gland and the 3rd eye are one in the same. We also know that the “liquid elixir” that the pineal gland/3rd eye produces is Melanin.

Today I learned that what astronomers refer to as “black holes” are, in fact, genetically superior Space Negroes.

What does actual science say about all this nonsense?

Melatonin regulates sleep; melanin determines skin pigment. For at least three decades, prominent black “academics” have been basing their crotch-tugging boasts of intellectual superiority on the embarrassing fact that all big words look the same to them. Perhaps they also mistook “pineal” for “penile”?

As my father used to say, “These people can’t tell their ass from a hole in the ground.”

In 2019, Kirsten Clarke successfully represented a black woman named Taylor Dumpson — who had recently become the first black female student-body president at American University — in a civil lawsuit against Andrew Anglin of the Daily Stormer, whose calls for a “troll storm” to harass Dumpson allegedly persuaded pranksters to leave bananas around campus, causing Dumpson $725,000 worth of emotional suffering.

In interviews given over the riot-addled summer of 2020, Clarke stated that all the burning and beating and murdering and looting on behalf of a felonious, fentanyl-drenched retard named George Floyd presented a “perfect storm” for the melanin-rich and IQ-deficient to pretend they deserve to be treated as equals. She has also stated that it’s high time for another round of Reconstruction.

Black-supremacist hypothesizing and excuse-making have always been enjoyably dumb — until now. Biden has appointed a black supremacist who can’t tell her ass from a hole in the ground to enact Reconstruction-level racial vengeance against white America.

I can’t seem to laugh about this, and I don’t want to cry.