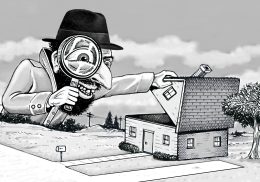 With so few of us agreeing on anything — and with some of us so conflicted that half the time, we don’t even agree with ourselves — can we at least all form a drum circle, hold hands, and agree that they’re trying to drive us mad just for the sick fucking thrill of it?

No matter where you stand on exactly how much of a threat to public health and order COVID-19 is, by now it should be clear to anyone who’s barely awake that the world’s financial overlords and their governmental mandarins are using it as an excuse to turn the screws in all the way to the hilt. This is a power grab achieved while dancing on corpses — and digging the graves for many more corpses to come.

“It can’t get any worse,” you reassure yourself.

It can always get worse.

With everyone locked down, locked in, and increasingly robbed of even the pretense of personal agency or dignity, no wonder everyone’s looking for a scapegoat.

Some people blame homos. Others blame Jews. Still others can’t tell the difference between homos and Jews. Nobody blames blacks. And everyone blames whites.

Madam Akua Donkor, leader of the Ghana Freedom Party, is such a hideous African swamp creature that it’s hard to conceive that any male in history has ever desired her as a sexual partner, but then again, I am neither African nor sexually desperate. In keeping with many of her co-Africans across that doomed continent, she hates homos and takes what seems like a near-sexual pleasure at the idea of their punishment. She is currently seeking the coveted role of president of Ghana and has made it her priority not to cure poverty or stupidity, but to hunt down homos and cage them “in holes” where they are unable to fill any other male’s hole nor to have their holes filled in return:

My first port of call when I’m voted for is to deal with homosexuality in Ghana. I’m going to make sure it does not enter the shores of Ghana. I will do this by arresting all persons involved in the act. They will not be kept in the same cells but rather will keep them in separate cells to starve them of the despicable act.

Mustafa Yousuf Al-Lidawi is a former Hamas official who, just from that photo, appears to seethe with blinding alpha-Muslim hatred for Jewish homosexuals. He is the purported author of “many anti-Semitic articles,” two of which alleged that “that Jews used to kill Christian children to make Purim pastries and Passover matzas.”

In a recent essay, Al-Lidawi blamed homosexual Jews for pushing the homosexual agenda in the most Jewy way possible:

Jews. . . love perversion and gender-change, and they encourage and preach homosexuality, for they make a habit of producing despicable scenes and abominable dialogue that reveal their perverted inclinations and expose their rotten psychological makeup and the repugnant truth about them. . . . The Israeli homosexual perverts, who became numerous and gained power and influence, [and who] put their [homosexual] relations on display and were proud of their perversions, became organized and spoke with one voice. . . The Zionist entity is considered one of the countries most suitable for homosexuals, transgenders and bisexuals, and for their cohabitation. . . Israeli Defense Minister Benny Gantz may have been one of the people most attentive and most supportive of their activities — so much so that some Israelis accused him of being a homosexual himself and claimed that he belonged to this community of perverts.

In Europe — where barely a million Jews remain and comprise less than one percent of the continent’s population — a recent report on “hate crimes” says that Jews bore the brunt of a robust 22% of these vicious and undeniably odious attacks. Jews therefore snagged the silver medal when it came to European hate-crime victimization, falling slightly behind those who were attacked due to perceived migrant status, but ahead of — in order — those targeted for being perverts, Christians, and Muslims. It’s somewhat remarkable that not only does this study consider it possible for Christians to be victimized by hate crimes, but that they even outpaced Muslims in the oppression sweepstakes.

But no matter which way you slice the bagel, that’s a bumper crop of European Jew-hatred. It almost leads an inquiring mind to wonder what they could have possibly done to inspire such loathing.

British novelist Roald Dahl is perhaps best known for children’s classics such as James and the Giant Peach and Charlie and the Chocolate Factory. He died in 1990. But now, thirty years after he joined the Choir Invisible, his family feels compelled to come forth and offer a public apology for comments that he made while alive — hateful, horrible, heinous things such as:

There is a trait in the Jewish character that does provoke animosity, maybe it’s a kind of lack of generosity towards non-Jews. I mean, there’s always a reason why anti-anything crops up anywhere. Even a stinker like Hitler didn’t just pick on them for no reason.

In 1990, Dahl told a reporter for The Independent: “I’m certainly anti-Israeli and I’ve become anti-Semitic in as much as that you get a Jewish person in another country like England strongly supporting Zionism.”

So now, his family, who have undoubtedly been financially riding his casket for the past three decades, has issued a formal apology to All Jews Everywhere on their patriarch’s personal website:

The Dahl family and the Roald Dahl Story Company deeply apologise for the lasting and understandable hurt caused by some of Roald Dahl’s statements. Those prejudiced remarks are incomprehensible to us and stand in marked contrast to the man we knew and to the values at the heart of Roald Dahl’s stories, which have positively impacted young people for generations. . . . We loved Roald, but we passionately disagree with his anti-Semitic comments. . . . We are truly sorry.

With family members like that, who wants to live?

As every newspaper and TV news station on Earth can tell you, it’s not easy being Jewish. In a story that sounds suspiciously like that fabled hoax photo of black nurses trying to revive a patient in full Klan regalia, a Jewish doctor recently wrote of how the pandemic has battered his psyche to the point where he wonders whether he should even treat a patient whose body was “covered in Nazi tattoos.”

Yes, it’s getting to the point where it will be soon considered an act of highest virtue to deny healthcare to “racists.”

Citing the statistical fact that black farm ownership plunged precipitously at the beginning of the 1900s — while conveniently ignoring the fact that farm ownership plummeted across the racial spectrum as the 1900s dawned — a trio of failed presidential candidates named Cory Booker, Elizabeth Warren, and Kirsten Gillibrand have sponsored a bill that would suck $8 billion a year out of white taxpayers’ pockets and specifically earmark it for black farmers.

Effectively admitting that middle-class whites are the new kulaks, “a panel of Black and white authors and social activists agreed. . . [that] the white middle-class is often the biggest obstacle to battling racial disparities in housing, education, and economic improvement.”

One of the star panelists was Tim Wise, a Jewish man with a lifelong hatred for whites who’s been able to milk his anti-white animus to the point where he has an estimated net worth of $17 million — and who is able to know who stands in the way of black economic progress better than a race-baiting Jewish multimillionaire?

Earlier this year, the Associated Press officially capitalized the word “Black” while keeping “white” lowercase. And now comes word that Facebook — which once at least liked to pretend that it treated all “hate speech” equally” — has now officially demoted criticism of white people and men as “low sensitivity” compared to “slurs directed toward Black, Muslim, biracial, Jewish and LGBTQ users.”

A Facebook spokesperson said that the company will now treat statements such as “Gay people are disgusting” much more seriously than a casual “Men are pigs”:

We know that hate speech targeted towards underrepresented groups can be the most harmful, which is why we have focused our technology on finding the hate speech that users and experts tell us is the most serious. . . . Over the past year, we’ve also updated our policies to catch more implicit hate speech, such as content depicting Blackface, stereotypes about Jewish people controlling the world, and banned holocaust denial. Thanks to significant investments in our technology we proactively detect 95% of the content we remove and we continue to improve how we enforce our rules as hate speech evolves over time.

Facebook’s decision was said to be partially inspired by Susan Benesch’s “Dangerous Speech Project.” Benesch’s Wikipedia profile quotes her as claiming that she is descended from “immigrants, refugees, and people who were killed because other people had been taught to hate them.”

Bah, humbug! It’s enough to make a white person — or even 250 million of them — start to get angry.

« The Mere Thought of Racism