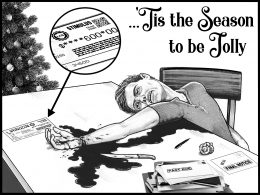 Apparently, Uncle Sam has decided to dress as Ebenezer Scrooge this Christmas.

I don’t know much about economics — if I did, I’d be a millionaire rather than a writer — but I know enough to realize that the US economy is wrecked beyond belief.

Make no mistake — it had fallen into a bottomless pit before this horrid year even launched. A year ago, combined national debt and unfunded liabilities were easily over $100 trillion, meaning that every living taxpayer already “owed” nearly $1 million to the feds at some indeterminate point in the future, most likely when China and others started calling in debts.

But this year, as if by design, the economy was smashed beyond redemption, all in the alleged service of combating some virus I keep hearing about. Due to the ongoing and likely never-to-end lockdowns, tens of millions of people lost employment — perhaps permanently — while businesses small and large were shuttered forever. Federal spending for the past fiscal year is more than twice the revenue the government collected from taxes. An estimated third of all dollars in existence were printed over the past ten months.

I don’t care if you call me paranoid for suspecting this is all engineered to force a market crash, a currency collapse, and then a benevolent reset wherein the government heroically rescues us all to the point where it locks us in padded cells for our protection and dictates when we’re allowed to have a bowel movement.

Back in March when they inaugurated the systematic economic shutdown, the feds doled out $1,200 stimulus checks and gave us some vague assurances that things would get better. Then came nine months of layoffs and shutdowns and lockdowns and riots and grindingly diminished hope, all of it peppered with relentless lying and gaslighting.

Last Sunday, five days before Christmas, Congress rolled out a new “relief” program in the form of a 5,593-page bill and decided that economically desperate Americans only needed half of the stimulation they did last spring.

The median US household income in 2019 was roughly $1,200 a week. So stressed-out and economically hopeless Americans, frightened that their future has already been stolen from them, are expected to feel “stimulated” this time around by the equivalent of a half-week’s pay.

It feels as if Santa Claus has wriggled down the chimney just to kick us all in the balls.

It reminds me of the time I went trick-or-treating, and the nasty old wheelchair-bound man who lived up the block gave us five pennies tightly wrapped in tinfoil instead of candy bars.

The members of Congress are either incomprehensibly out of touch, or they’re actively sadistic.

The $900 billion COVID-19 bill was folded like wilted lettuce inside a $2.4 trillion omnibus burrito that is supposed to keep the government afloat until next September. Many imminent recipients of a one-time $600 check were infuriated to the point of poppin’ blood vessels to learn that despite giving Americans the equivalent of a greeting card for Christmas, Congress found it in their hearts to liberally sprinkle billions o’ bucks on seeming non-essentials:

Whether he’s sincerely angry or simply feigning outrage so he can stick it to everyone on his way out the door, Donald Trump called the $600 checks a “disgrace” and threatened to veto the bill unless the payouts were increased to $2,000. Supposedly Congress will be voting on the upgrade today — Christmas Eve — and the only ones who threaten to stand in its way are fiscally conservative Republicans.

This new bill will saddle the average American taxpayer — and lest ye forget, slightly fewer than half of living Americans are taxpayers — to the tune of $16,783 — which is $600 twenty-eight times over.

Some gift! It’s like finding out that someone’s given you a new pair of underwear for Christmas, except they’re merely returning one of the 28 pairs of new underwear they’ve already stolen from you. Oh — and they’ll expect that one pair back with interest.

This doesn’t constitute robbing Peter to pay Paul — it’s robbing a dollar from Peter, then giving him a nickel back.

How about you simply never take the money from me in the first place? I’d rather buy my own underwear and eliminate the middle man, thank you very much.

I suppose the only remaining mystery is how much of this is rank incompetence and how much is pure sadism.

Maybe it’s all a long con designed to gradually wean everyone off of hope. What exactly will our beneficent overlords have to do before more people finally say, “This system is beyond redemption”?

The only thing I’m left wondering is exactly how far out of the USA one can get on a $600 one-way plane ticket.

« Living in Truth: A Yuletide Homily