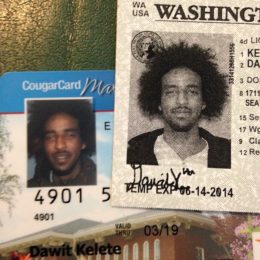 What’s the definition of mixed emotions? Answer: It’s when your mother-in-law drives your new Cadillac off the side of the Grand Canyon. Normally, I would be upset at yet another Negro killing a white girl and seriously injuring another, but in the case of Dawit Kelete, I’m not so sure. Kelete, an affirmative action DoorDash driver from Eritrea, ran over two hideously ugly “non-binary” white female BLM protesters on I-5 in Seattle on the morning of the Fourth of July. Most of you have probably seen the footage of Mr. Kelete ramming his white Jaguar into the two non-binaries. For lethality, Mr. Kelete only rates 50%, but for style points, I’d give him a 9.7. Those quadruple backflips performed by the non-binaries would have made Mary Lou Retton proud.

Mixed emotions indeed. More like Schadenfreude on steroids. Mr. Kelete’s case conjures up irony upon irony upon irony. The Negro who kills and maims white BLM protesters while driving a Jaguar. That certainly blows the white privilege narrative out of the water. But then we have to ask: Are non-binaries actually human? According to the Left, all biological concepts are merely social constructs, matters of choice. If that is the case, then as far as I’m concerned, anyone who behaves in a non-human manner should be considered to be a non-human. As such, Mr. Kelete’s crime should be nothing more than a misdemeanor. Thirty days suspended sentence and 40 hours of community service sounds about right to me.

But the more that I think about it, the madder I get about those white non-binaries trying to hide behind their white non-binariness. Don’t they realize that they are actually responsible for Mr. Kelete — a poor, struggling Eritrean DoorDash driver who could only afford a Jaguar and who was delivering the food that Americans refuse to deliver — breaking through the barriers to a closed freeway and going down the wrong way on an exit ramp and then running them over? Imagine the systemic racism that Mr. Kelete experienced over and over again as he took DoorDash deliveries in his Jaguar to white non-binaries in Seattle. It is no wonder that Mr. Kelete thought his life was in danger when he illegally entered the interstate and was confronted by those same white non-binaries. He had no choice but to run over the white non-binaries with his white Jaguar and flee the scene.

Now it has been announced that Mr. Kelete is being held in jail on a $1.2 million bail. So much for bail reform. And Kamala Harris, the affirmative action Negro senator from California, has gone on record expressing sympathy for the white non-binary tormentors of Mr. Kelete. Obviously, Harris is being influenced by her white supremacist Jewish husband to throw her African brother under the bus just to make her more palatable to the white supremacist Joe Biden. He will soon decide on which affirmative action Negro to select as his vice-presidential running mate, after all.

All of this goes to show that there can be no peace until there is justice for Jaguar-owning Eritrean DoorDash drivers. How can America claim to live up to the words of the Declaration of Independence when Eritrean DoorDash drivers have to fear for their lives when they run over privileged white non-binaries? My fear is that the privileged white males of the mainstream media will deliberately try to memory-hole the grave injustices done to Mr. Kelete. We cannot let that happen.