The Counter-Currents 2019 Fundraiser
Becoming a Leader 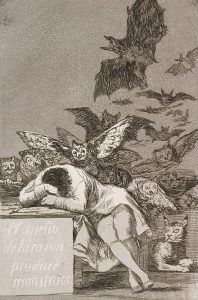 Our goal this year is to raise $100,000 in order to expand our efforts to build a metapolitical vanguard for White Nationalism. So far, we have received 323 donations totaling $46,015. We set our goals high because the task we have before us is formidable, but with your help, we will succeed. Even after being cut off from our credit card processor for the second time this year, we have managed to raise 46% of the total amount in just over two months — which is a victory in itself! A couple of days ago, we were able to restore our payment processing, so that we are now again able to accept recurring donations as well as donations and transactions from credit cards outside of the US. We want to thank everyone who has supported us through this challenge. Now, let’s make sure we reach the goal!

For as long as I’ve been writing, lo these twenty long years, people have been asking me why I write, expecting some deep philosophical wisdom. What happens is I usually mumble something about going insane if I don’t write, which I suspect is somewhere between the whole truth and outright falsehood. There’s a little bit of that, and there’s a little bit of narcissism, and there’s a little bit of the power trip of “I create as I speak”; and then there’s the fact that when I write, good things happen to me. For example, I met my wife at a poetry reading. I seduced her with a poem. I cemented her affection for me with a script for a radio play (long story).

But ask me what got me writing for Counter-Currents and I’ll tell you quite clearly. I smelled blood in the water when the Trump Train started losing steam, and I wrote a long article about how Orange Blumpftler is in all likelihood the last President of the USA before the collapse of the American Empire and the commencement of Kali Yuga. A friend of mine read it and said it was good enough to be published at Counter-Currents, so he put in a good word for me with Greg Johnson. Apparently, Greg liked what he saw, so here I am. I write for Counter-Currents because it’s the right thing to do.

I gave myself two missions: First, to seek out any weak points in the line and armor of our enemy, and the narrow points in his supply chain which could be assaulted; and second, to develop, discover, or unearth heuristics for becoming a leader. Ideas pertaining to these two concepts are related to each other. A man equipped with both can create a local organization to channel and direct the energies of young men who’ve taken the red pill. I am a firm believer in the power of local organizations to exert political and economic influence, control the message and its optics, and even prevent violent outbursts from the overeager. I don’t imagine the El Paso tragedy would have transpired if Patrick Crusius had had a welcoming group to constrain his baser impulses. I similarly don’t believe Christchurch would have occurred had the obviously talented Brenton Tarrant had had the tools and heuristics necessary to become a leader and cultivate such a group.

I cannot hate those poor, lost boys because I realize that but for the grace of God, there goes Nicholas Jeelvy. We live in a sad time when young men do not have the tools to temper and focus their anger. One more drop of despair, one less speck of hope, and it might have been me you’d be reading about. Both of the tragic men named above only needed hope that the enemy can be defeated without senseless violence. These two missions work towards our ultimate victory. The way to win has been laid out by Julius Evola (ride the tiger to completion) and by Mencius Moldbug (become worthy, then rule). As the tiger of modernity grows weaker, we must become worthier and stronger. At some point in time, the curves of the weakening tiger and the increasingly worthy ruler will intersect on the graph. Then, we act. Until then, keep your powder dry and prepare for things to come. Discipline is the name of the game – but then, he who can impose discipline on young men who are near pure will-to-power is a wise man, indeed.

Along the way, I reviewed some films, books, and television programs; dealt with some news items; laid out some of my wilder theories; put some boomercon stupidities to rest; and made the first steps towards a synthesis of Neoreactionary and Dissident Rightist thought. I came across a great, big wall of literature I have to climb before that last one can be completed (sneak peek: Now I can no longer avoid reading The Culture of Critique). I got into a minor spat with Hunter Wallace over Yang Gang (boy, did that not age well), and trolled our esteemed editor John Morgan over his misguided love of 2001: A Space Odyssey (it’s a bad movie, John). I even got declared “the worst writer in the history of Counter-Currents” by a Counter-Currents hate blog. Has it been a year? It feels like a year. It was a very good year.

I hope that I have helped someone. I hope that at least one man has seen the light, or been dissuaded from hedonism, despair, or unproductive cul-de-sacs of thought. Everyone reading this should reflect on what Counter-Currents means to him. I can’t tell you what it means to you. The way I see it, I come here as a reader to reflect on both our past and our future. Much of what has been written here is the definitive Dissident Right take on the subject with which it deals. We go for culture and meta-culture, because everything is downstream from that. What we write here is the accepted wisdom of tomorrow. We also document the wisdom of our elders. When bedeviled by insomnia in Sicily, I amused myself by reading some of Evola’s writings during the long, warm nights. Even while on weak hotel WiFi, in a part of the world which shares my attitudes towards work, Counter-Currents delivered. My first article grew out of that. (I’ve modified my stances a bit since then, however. I no longer believe Trump will survive 2020, nor do I think that Kanye will replace him – it’ll probably be some Democrat – but I think the general thrust still stands: The world as it is won’t go on for much longer, and we’re in for a bumpy ride.)

Just today (August 19, 2019), the YouTuber The Distributist uploaded a video calling for people to take up any of nine leadership archetypes as part of the Dissident Right. The video is well worth watching, but here’s the gist of it: We need ambassadors to be our face to the normies, artists to package our message attractively, engineers to construct platforms for our message, intellectuals to justify and develop it, archivists to store and organize past wisdom, educators to pass on our message to the young, receptive hosts to provide a forum for insiders to hold discussions, religious leaders to inspire us, and networkers to keep the whole thing trucking along. Counter-Currents fulfills many of these roles, if not all of them, and within the ecosystem of the broader Dissident Right, this site is a megalith which can be seen for miles around, providing not only leadership as such but the tools necessary for an ambitious and red-pilled young man to become a leader in his local community. This circles back to one of the missions I gave myself: to develop, redevelop, and unearth those heuristics and tools which were denied us by our faulty upbringing.

There’s one final reason Counter-Currents is special: Argumentation and philosophy are all well and good, but men hardly ever act out of reasoned argument. To that end, let me relate a conversation I had with the owner and operator of my local pizza parlor.

As I walked into his establishment (una piccola bella pizzeria), I was pleasantly surprised to hear mid-century Italian pop music. Being friends with the owner, I quickly began conversing with him about how Italian music is so accessible, and how it is a good alternative to American RnB synthetic crap. I took the conversation in the direction of a broader love of European mid-century chanteuses, but the owner, a salt-of-the-earth kind of guy, interrupted me to say something like, “Look, we shouldn’t overanalyze it. It’s like with a woman or a car. I know what I like, and I like it at first sight. I don’t need to see it or hear it ten times to appreciate it.”

Here at Counter-Currents, we deal with that which is beautiful. That which is beautiful is true in the sense that our bodies respond to it before that eminently deceivable Poindexter – the conscious mind – can get a subversive word in edgewise. As I learned when I quit my career as a wildly successful insurance salesman to become a penniless hipster filmmaker, beauty is what keeps us trucking, what convinces us to do this and that, and what drives us to be and become. My red-pilling came on one of those warm summer nights where the shades and good spirits of Deep Europe walk unabashed, in the square of a small town in Dalmatia, when I saw a young man embrace a young woman, spin her around, and set her down again while the local klapa (an a cappella choir) sang a love song as old as the rocks themselves. In that perfect moment, I saw an unbroken chain of life and love in that particular place, vast in time. I saw the core of a nation: life, love, and creation. It wasn’t an intellectual experience. It was damp and made of meat, biological and effervescent. It was more than right. It was beautiful.

Regrettably, we were born many centuries after our civilization’s first Socratic man. We will never know our grandfathers’ joy of living in a world untarnished by the probing light of skeptical philosophy. But there is no use in despairing over our predicament, even as we yearn for that bliss every now and then. We can only move forward, seeking truth and wisdom, both practical and for their own sake. We must use every tool at our disposal, carve out an intellectual space for our movement, and a physical space for our people. Above all, we must pursue beauty, and we must find it where it hides, even in the ruins of ugly, dehumanizing modernity.

This is what I got from Counter-Currents: I now know that I am not alone on this pilgrimage, and that although we are separated by vastness of space, our common heritage as sons of Europe unites us in the depths of times past. And I know that, in this flicker that is a mortal life, I might be allowed to be a student, a teacher, and perhaps, in good time, a friend to my brothers.