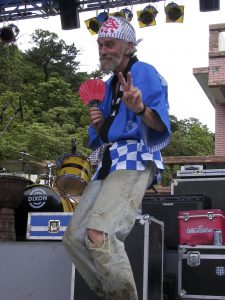 Probably the chairman of a university department somewhere.

The past four months have been a rather hectic round of presentations at scholarly conferences for your favorite ancient Roman rhetorician. This is my main contribution to the movement. I attend scholarly conferences so that the rest of you don’t have to. Also, it’s the best way of doing reconnaissance of the enemy. And even though I’m fairly inured to the nonsense that passes for “humanistic scholarship” these days, sometimes it’s just more than one can stand.

Recently, I found myself in a mostly deserted auditorium listening to some five-hundred-pound purple-haired creature of indeterminate sex drone on about “Queering Melville.” Interestingly enough, her remarks had little to do with homosexuality or Herman Melville but were mostly concerned with President Trump’s border policies. I was unable to discern how ICE regulations could affect Queequeg’s legal status, however, so I quickly lost interest. I pulled printouts of recent Counter-Currents articles from my briefcase and began reading Collin Cleary’s three-article series on the metaphysics of the Left and the Right. There is always a certain pleasure in reading forbidden texts behind enemy lines, but this time the pleasure was compounded by the wisdom of Mr. Cleary’s writing and its appropriateness to the occasion in which I found myself. Although this does not give full due to the intricacy and fullness of his argument, I would summarize Mr. Cleary’s position as being that the metaphysics of the Right is based on reality (truth, facts, objectivity, logic, etc.), while the metaphysics of the Left is based on unreality (denial of facts, subjectivity, inability to discern contradictions, illogic, etc.)

I started to think about how many times in the past four months of conference attendance I had seen nearly perfect examples of the Left’s perverted metaphysics as described by Mr. Cleary. One such case was a paper given by a mestizo affirmative-action professor who said that the greatest challenge faced by his Hispanic students was the stereotype promoted by whites that Hispanics are violent. He said that this stereotype was particularly harmful to his students because most of them are poor and live in an area of the city in which his college is located that has a daily average of eight homicides perpetrated by Mexican gangs. Most of the members of the all-white audience nodded in agreement with the speaker, and more than a few could be heard to say “that’s right” or “um-huh,” just like Negro parishioners at a Reverend Ike crusade. It was amazing to me that these allegedly highly-educated white academics could not fathom that the speaker had effectively contradicted his argument while making it. How is the fact of Hispanics being murdered on a daily basis by their co-ethnics somehow dispositive of the argument that Hispanics are violent? Of course, it goes without saying that any white person is racist who points out that Hispanic violence is evidence of Hispanic violence. In the bizarre metaphysics of the Left, 1 is never equal to 1. The old saw about Leftism being a mental illness is not an exaggeration. It really does seem that Leftists are incapable of recognizing their own cognitive dissonance.

All of this has brought me back to my own first memorable experience with Leftist unreality that occurred while I was in graduate school in antediluvian times. I had a number of particularly demanding classes one semester, and needed to fill out my schedule with one more class in order to fulfill the requirements for my fellowship. Several friends suggested to me that I take a class from a professor who was known as Dr. Hippie and whose classes were automatic A’s, since they were devoid of content and requirements. The early 1970s were actually pretty peaceful on college campuses. After the Kent State shootings, most of the radical behavior died down, especially since the radicals realized that they could be shot for their behavior. Ah, the good old days. Professors were mostly male, wore suits and ties to class, and faculty and students alike even smoked during classes. Other than an occasional snide remark about Spiro Agnew, most Leftist professors just confined themselves to teaching their classes, which were often extremely intellectually stimulating. 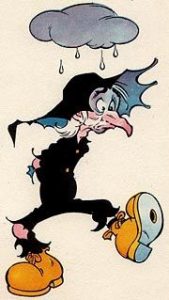 Dr. Hippie, on the other hand, wore jeans, had long hair and a beard, and sat cross-legged on his desk while he “rapped.” He didn’t lecture, he rapped, which in the early 1970s was not a pop music subgenre but a term that meant having a “down-to-earth” talk. Dr. Hippie’s rapping was fine by me, since the only requirement for the course was attendance. I got a tremendous amount of work done for my real classes during Dr. Hippie’s rapping. In a way, I kind of felt bad for him. Dr. Hippie was perpetually depressed. There seemed to be a black cloud following him wherever he went, like the character Joe Btfsplk from the comic strip Li’l Abner (look right).

Dr. Hippie was depressed because he was a refugee from a progressive experimental school in the late 1960s that had collapsed in a spectacular fashion. As I understood it, Dr. Hippie was one of the few teachers at the school who was not prosecuted for financial and/or sexual improprieties. A large percentage of the faculty and most of the school’s administrators even wound up doing prison terms, some of them quite lengthy. Even though he just barely professionally and legally survived from the disaster of the experimental school, Dr. Hippie could not stop talking about it. Indeed, that is all he “rapped” about during his classes. It didn’t make any difference what the subject of the course was; he just talked incessantly about how great the experimental school was and how much better off we’d all be if we just adopted its progressive policies without, I suppose, the felony convictions and prison terms.

Dr. Hippie seemed to me to have a weak grasp of reality, but at that time I didn’t think it was indicative of Leftism as a whole, as my other Left-wing professors actually did a very good job of teaching their subjects and had very rigorous academic standards, which they even applied to Negroes. Because of this, the Negro students avoided them like the plague. The Negroes were, however, as fond of Dr. Hippie’s classes as they were of KFC and shiny wheel rims. But even though attendance was the only requirement for Dr. Hippie’s courses, the Negro students still had difficulty passing the classes, as it required them to rouse themselves out of bed for a 3 PM class. One day, in a remarkable change of pace, Dr. Hippie announced that the whole class would be taking a test – but this test was designed specifically to demonstrate that regular testing was unfair to Negroes, and that if they were just given special Negro tests, all of the Negro students would become valedictorians and all of the white students would be confined to special ed. This test was called the Black Intelligence Test of Cultural Homogeneity, or BITCH-100. I’m not kidding you, that is its actual name. It even has its own Wikipedia entry.

We took the test, which seemed to me to be just a quiz on black slang and wasn’t terribly difficult. I didn’t think anything about it. Several days later, as I was walking down the hall to the class’ next session, Dr. Hippie stopped me before I entered the classroom. He was red in the face and visibly shaking. He pointed at me and started yelling, “You did that on purpose; I know your type!” When I asked what it was I was supposed to have done, he started screaming, “You deliberately got the highest score in the class just to embarrass me and make the black students feel bad!” Being confronted with the heretofore unknown experience of being excoriated by a teacher for doing well on a test, I did what was probably the worst thing I could have done in the situation and started to laugh. This caused Dr. Hippie to scream even louder, and me to laugh uncontrollably. Dr. Hippie’s behavior was so unnerving to everyone in the hallway within earshot that the Chairman of his department came running down the hall to see what was the matter. When the Chairman asked me why Dr. Hippie was screaming at me, I replied that it was because I had gotten the highest score in the class on a test. Dr. Hippie again screamed, “He did it on purpose!” The Chairman – a decent sort of fellow who retired a few years later – rolled his eyes. He told me to go into the classroom with the other students, and he took Dr. Hippie down to his office. After a few minutes, the Chairman returned to the classroom and told us that class was cancelled for the day, and that since there was only another week left in the semester, that we would not be meeting next week and should turn in all assignments to the departmental office before the end of finals week.

The repercussions from my encounter with Dr. Hippie were relatively mild. Several weeks later, I received my grades in the mail. In my real classes – which were the most difficult classes I have ever taken – I received all A’s. In Dr. Hippie’s class, I received a B. As this was in ancient times, there was no official process to challenge a grade. In a sop to the radicals in the 1960s, however, there was a clause in the student handbook that allowed one to change a grade from a passing letter grade to simply passing as long as it wasn’t in one’s major. This applied, and my GPA was none the worse for wear. Today, of course, I would have been expelled and hounded for the rest of my life.

Dr. Hippie was less fortunate. About a year later, he impregnated one of his students and quickly married her. His chances for tenure were slim, so he did what so many other disgraced academics have done: He went to seminary and became an Episcopal priest. At my last college reunion, I heard that Dr. Hippie had recently passed away. There were several more marriages and several more sex scandals that ultimately led to Dr. Hippie abandoning priestly orders and becoming a New Age spiritual advisor, which these days is just about the same thing as being an Episcopal priest. In a strange way, I have to admire Dr. Hippie’s consistency. He never allowed reality or a rational thought to intrude upon his metaphysics. And he was a man ahead of his time. Contra Cory Booker, as far as today’s Leftists go, the politically correct mantra is not, “We are all Spartacus.” It is, instead, “We are all Dr. Hippie.”