Taunton on Tantra:
A Guide for the Perplexed Westerner 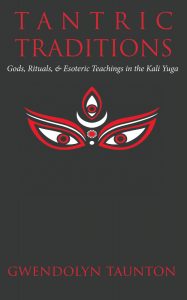 Mention “tantra” and almost any Westerner, no matter how sophisticated, thinks of weekend seminars on how to improve your sex life, with endorsements from the likes of Sting. In this book, Gwendolyn Taunton — a widely-published and well-regarded esoteric writer and publisher — brings real scholarship, and a hint of secret knowledge, to the task of rescuing Tantra from the misunderstandings and misappropriations of the West.

Since the modern Westerner values sex and rebellion above all, it’s not surprising that only the most superficial aspects of Tantra have been appropriated. Through a close study of the original texts, Taunton shows that Tantra, far from being antinomian and anti-Traditional, is actually firmly rooted in the very oldest strata of the Vedas; indeed, a chapter devoted to the study of the Hindu doctrine of cyclical time shows that the Tradition itself implies that the last Age, our own Kali Yuga, must develop its own methods of working with, rather than against, darkness, inertia, and materialism, precisely in order to preserve Order (dharma) and keep the path to liberation open.

For example, Tantra does not invalidate the caste system, but recognizes the mixing of castes and proposes its own fifth caste which combines the others; in this way, Tradition is honored while decadence is acknowledged and contained (rather than promoted or celebrated, as the Westerner does in his obsession with being “transgressive”). Taunton demonstrates throughout that Tantra’s transgressions are all committed from within Tradition and done so to preserve sacred Order.

The chapter on cyclical time alone is worth the price of admission; especially as it also includes a discussion of how the Traditionalists (Daniélou, Evola, and Guénon) have made it central to their own doctrines and thereby injected it into the wider Western consciousness. The most influential of these is Evola, and Taunton closely studies his adaptation of Tantra for the West, which is authentic yet idiosyncratic. Taunton also puts Evola’s relations with Fascism in perspective; like Tantra itself, Evola was simply using the available material to construct a bulwark for Order and Tradition in the degenerating modern world.

Other chapters deal with the various gods and goddesses associated with Tantra, showing how their multitudinous and contradictory forms are the sign of their reconciliation of mundane opposites into a higher unity.

Taunton also explicates lesser-known aspects of Tantra, such as the role of sacred places (“Topographical Religiosity”), and the very important and well-developed Hindu doctrines of sight and sound (“Lexicographical Gnoseology”), ritual elements to which the West has paid scant attention in its own traditions. In all cases, Taunton resolves their apparently wild and outré Tantric manifestations into well-grounded, conservatively-intended extensions (the meaning of the word Tantra) of the Vedic traditions.

The typically impatient Western reader who perseveres to the end will be rewarded with a chapter on Tantric spells and rituals for gaining power in the world of the Kali Yuga, complete with Appendices of mantras and alchemical correspondences; the material may be startling, but again, the discussion is sober and non-sensationalistic, with no more emphasis than given by the Tantric texts and traditions themselves.

I respectfully disagree with an earlier reviewer on Amazon: rather than being “not for non-specialists,” this book is just what they need!