The Radioactive Drag Fag Who Stole a Lady’s Bag 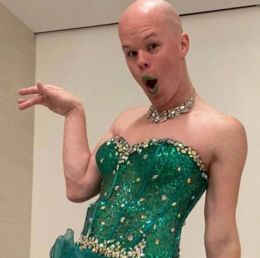 Sam Brinton, who the Biden administration thought was the perfect choice to protect the United States from nuclear disaster.

I believe that blind people have a right to be employed — but not as military snipers or crossing guards.

I believe that deaf people are entitled to a living wage — but not as record producers.

In the same spirit of fairness teetering toward cruelty, I believe that people who suffer from gender dysphoria and have lingering resentment toward a world that has bullied them their entire lives probably shouldn’t be in charge of deciding where our nuclear waste gets dumped. They could always have a bad hair day and wind up killing us all.

Due to misguided hypersensitivity about trampling upon the precious feelings of homosexuals and fledgling trannies, the United States Army ignored an entire North Korean military parade’s worth of red flags about Bradley Manning, who told the world he was actually a woman named “Chelsea Manning” after he’d divulged military secrets that in his own words put other people in danger.

Until he was recently put on leave for allegedly stealing a woman’s suitcase from an airport carousel and telling multiple lies about it, MIT grad Sam Brinton was the deputy assistant secretary of Spent Fuel and Waste Disposition in the Office of Nuclear Energy for the Department of Energy. After his appointment in January of this year, it was suggested with big, brassy, flatulent fanfare that Brinton “may be the first openly gender-fluid person in federal government leadership.”

“But what about Admiral Rachel L. Levine,” you stammer, “who was appointed Assistant Secretary for Health last September? Wasn’t it the first tranny in a federal leadership position?” The problem — one of many — with Levine is that it has decided it’s a woman and not a man anymore. So Levine is what one might call “gender-solid.” By being “gender-fluid,” Sam Brinton can choose to be whatever gender he wants whenever he wants to be it. His gender identity is always in flux — or, to put it a bit more harshly, he’s all fluxed-up.

Look at this homosexual hard-boiled egg gushing about how the nuclear-waste management industry stresses that “transparency and honesty and trust-building are so critical.”

But even though it’s so critical, he tends to spend more time talking about how he’s not actually a boy any more than he does about averting nuclear mishaps. To hear him speak, one would be led to believe that for Candy Apple Sam, saving the US from a nuclear disaster may take a backseat to the crucial mission of “removing this dangerous and discredited idea that we can ever change something we never chose.”

He has it ass-backwards there: A tranny’s entire existence is predicated on the idea that he can definitively change something he never chose. It’s even worse with a “gender-fluid” tranny, because he can keep changing his sex whenever he feels like it.

In a bio that was on his website earlier this morning but was deleted while I was writing this article, possibly because he has recently found himself in a heap o’ trouble, Brinton focused almost entirely on the LGBT thing and gave short shrift to his mission as a waste-management technician:

Sam has worn his stilettos to Congress to advise legislators about nuclear policy and to the White House where he advised President Obama and Michelle Obama on LGBT issues. He shows young men and women everywhere he goes that they can be who they are and gives them courage. Once, while he was walking around Disney World in 6 inch stilettos with his boyfriend, a young gay boy saw Sam with his boyfriend and started crying. He told his mother, “t’s [sic] true, Mom. WE can be our own princess here.”

When he isn’t keeping us all safe from radiation poisoning, Brinton is also a drag queen called “Sister Ray Dee O’Active” in an anti-Catholic troupe that calls themselves the “Sisters of Perpetual Indulgence.” During the group’s performance of “Lavender Mass 2021,” Brinton referred to Anthony Fauci as a “saint” and called him “Daddy Fauci.”

An article earlier this year claims that Brinton told a group of college students “how he enjoys tying up his significant other like a table, and eating his dinner on him while he watches Star Trek.”

A 2016 profile in Metro Weekly depicts our new nuclear-waste czar as a member of a coterie of leather fags who engage in “pup play.” Brinton assumes the role of a human “handler” who issues harsh orders to his leather mask-wearing “dog” as some form of demented foreplay:

I actually have trouble when we transition from pup play to having sex. Like, “No, I can’t have you whimper like that when we’re having sex,” because I don’t want to mix that world. It’s interesting, because he doesn’t have to come out of pup mode to have me fuck him. I personally have to bring him out of pup perception for me. But then I’m still treating him as a submissive to me. One of the hardest things about being a handler is that I’ve honestly had people ask, “Wait, you have sex with animals?” They believe it’s abusive, that it’s taking advantage of someone who may not be acting up to a level of human responsibility. . . . The other misperception is that I have some really messed up background, like, did I have some horrible childhood trauma that made me like to have sex with animals.

But all the hope and tremendous promise that he displayed as perhaps the world’s first nuclear waste management technician who also wears women’s clothes and reenacts bestial scenes with willing human partners who pretend that they’re dogs was dashed this fall when Brinton decided to avail himself of a stranger’s luggage on the afternoon of September 16 at Minneapolis-St. Paul International Airport.

Arriving from DC after not having checked a bag upon his departure, Brinton sashayed up to a carousel that was dispensing bags from a flight that had originated in New Orleans. He grabbed a Navy-blue Vera Bradley roller bag. Surveillance cameras show that he tore off the bag’s luggage tag, placed it in his purse, and hastily walked out of the airport. He stayed at a motel in St. Paul for two days and then returned to the airport with the bag and flew with it back to Washington, DC. Surveillance cameras in DC also spotted him returning from Europe with the bag on October 9.

When police finally contacted him, he denied taking anything that was not his. He also said that even though he might have taken the wrong bag, the clothes inside it were his, anyway. Two hours later, he called police back and said he hadn’t been “completely honest.” He claimed that when he first arrived at the hotel, he realized it wasn’t his bag, but he “got nervous” and “didn’t know what to do.” He told police that he removed the victim’s clothes and placed them in drawers in his motel room. (Officials at the motel say no clothes were left in the room.)

Brinton was recently charged with felony theft for taking a bag that the female victim, who claims her bag still hasn’t been returned, contained items worth over $2,000.

This is the same flamer who insisted that “transparency and honesty and trust-building are so critical” to the nuclear waste disposal industry.

But he’s already been caught in multiple lies about his theft of the roller bag.

And by denying that he is a biological male, he’s been living an egregious lie for years now.

He is not someone who should be allowed anywhere near nuclear waste. America is still a free country, at least in theory, so he should be permitted to do whatever he pleases with the waste that issues from his alimentary canal and those of his human/canine partners.

But we have to keep the kooks away from the nukes.