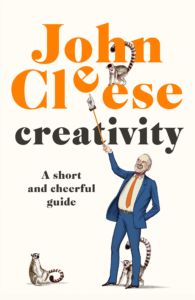 John Cleese of Monty Python and Fawlty Towers fame is one of the funniest men alive. He’s also fearsomely smart. Beyond that, he has the vision and courage to oppose political correctness, one of the banes of comedy, creativity, and civilization itself. Thus it was an easy decision to snap up his new book, Creativity: A Short and Cheerful Guide (London: Hutchison, 2020), now out in paperback from Penguin. Creativity truly is a short book — I estimate about 20,000 words. It can be easily read in one sitting, and with great profit, for it is brimming with arresting insights and useful advice on cultivating one’s creativity.

Cleese describes creativity as the ability to come up with “new ways of thinking about things” (p. 3). He denies that creativity is confined to the arts. Instead, it can be found and exercised in all areas of life. But he also denies that creativity is inborn, which is highly dubious. People who sell self-help books often say this, thinking that if traits are heritable, nobody needs a guidebook. This does not follow, however. One can grant that one’s creative potential is largely genetic. But actualizing one’s potential takes work. It can be done well or badly. One might therefore benefit from a self-help book like Cleese’s. Beyond that, even if genes set the parameters of creativity, surely everyone has some unactualized creative potential, so this book has something for almost everyone.

In Chapter 1, “The Creative Mindset,” Cleese deals largely with the unconscious mind and its role in creativity. Cleese was trained in the hard sciences and then studied law at Cambridge. Both fields emphasized focused, conscious, and effortful studies, with definable goals and limited time frames. Thus, Cleese was surprised when he would work on creative problems in the evening, go to bed without solving them, and wake up with a solution the next day. His conclusion is that there’s more to thought than focused, conscious, time-constrained, and effortful problem-solving if your mind can discover solutions while you are literally unconscious.

Cleese distinguishes his idea of the unconscious from Freud’s dustbin of repressions and traumas. For Cleese, the unconscious is simply all those processes taking place in us without conscious control. This includes automatic bodily processes like respiration and digestion. It also includes learned but automatized skills like driving and playing the piano. Many automatized skills are better performed when you don’t think about them. The unconscious has information and know-how that the conscious mind often lacks, cannot duplicate, and can seldom improve upon. The most creative people are adept at using both their conscious and unconscious minds to solve problems. One key to creativity is therefore to cultivate and listen to one’s unconscious mind.

Chapter 2 takes its title from Guy Claxton’s book Hare Brain, Tortoise Mind. We’ve all heard dumb ideas and schemes described as “hare-brained.” But Claxton uses “hare brain” to refer to fast, self-conscious, disciplined, effortful, goal-directed thinking, which is the model Cleese learned in studying law and the hard sciences. The hare brain thinks “logically, analytically, and verbally (or numerically).” The hare brain is a powerful tool for learning and problem-solving. But it is not the best way to solve all problems.

Both play and procrastination are features of the tortoise mind. Play is the opposite of work. Work is discipline, effortful, and purposive: all hare brain traits. Play is undisciplined, effortless, and pursued as an end in itself. Playfulness is correlated with creativity because playful people are more capable of listening to the unconscious. Procrastination requires a tolerance for the discomfort of openness and irresolution, but it aids creativity by giving an opportunity for new ideas and information to emerge.

Cleese follows Schopenhauer in declaring that interruptions are the chief enemy of creativity. (See my “Rules for Writers,” Part 1.) Thus, we should set aside spaces and times for uninterrupted creativity. There are two kinds of interruptions: external and internal. The external ones are easiest to manage. Organize your life so you can switch off your phone and computer. Internal interruptions are harder to manage because they consist mostly of our own undisciplined thoughts and feelings.

Cleese likens removing stray thoughts to meditation. Some people can simply clear their minds. Cleese is not so lucky. He has to employ tricks, such as writing stray thoughts down on sticky notes, whereupon he promptly forgets them. I can’t eliminate stray thoughts by conscious effort, but I find that if I just stake them out and observe stray thoughts for a while, they stop coming around. Of course, if you completely clear your mind, you are meditating. But you are trying to solve a problem, so you are merely banishing whatever distracts you from working on your goal.

A common internal distraction is worrying about making mistakes. But there’s no point in worrying about mistakes before you make them. Save that for the editing and tidying phase, not the creative phase. When you set aside creative time, you should tell yourself there’s literally no such thing as a mistake. Another internal distraction is worrying about where what you are working on is going. But this is pointless, because in a genuinely creative frame of mind, you can’t know where you’re going because you haven’t been there yet.

The creative process requires both the hare brain and the tortoise mind, but calling upon the hare brain too soon can stifle creativity. Cleese suggests that when you start feeling overwhelmed by new ideas, it’s your unconscious telling you to switch to a critical, reflective mode and begin to test and tidy what you have created so far. When you find yourself getting bored with editing, that’s your unconscious telling you to shift back into the creative mode.

Cleese’s third and final chapter, “Hints and Suggestions,” is filled with practical advice, mostly for fellow writers. Whereas the second chapter focuses more on accessing the tortoise mind and the unconscious wellsprings of creativity, the third chapter focuses more on the hare brain’s strengths, which are criticism and analysis. For instance, there are many sound suggestions on getting others to read and criticize one’s work.

But for me, the most useful insight relates to the tortoise mind’s plodding. Cleese notes that there are always lulls in the creative process. The hare brain, with its emphasis on discipline, purpose, and effort, sees these lulls as failures that need to be overcome. Cleese, however, sees lulls as an opportunity for the unconscious to do its work in the creative process, using an apt analogy: “When you eat, the bit where the fork returns empty to your plate isn’t a failure. It’s just part of the eating process” (p. 84). Lulls aren’t blockages of the creative process. They are part of the process.

Just when Cleese advises you to end your work before your audience’s attention drifts, Creativity ends abruptly, although an ellipsis invites the reader to take over and create something of his own. Creativity is a gem of a book that will fan the creative sparks of anyone who reads it.