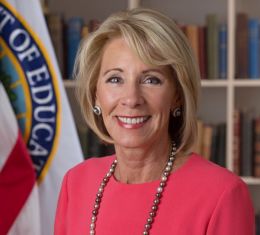 This June, the Biden administration proposed sweeping reforms to current Title IX regulations that would jeopardize single-sex spaces in schools and would roll back due process protections for those accused of sexual misconduct. The proposed reforms generated over 349,000 public comments during a two-month window, of which more than 160,000 mysteriously disappeared due to an alleged “clerical error.” It is safe to assume that the Biden administration jettisoned all critical comments and plans to proceed full steam ahead.

Much has been said about the administration’s redefining of “sex” to refer to gender identity. This would allow male-to-female transgender individuals to occupy female spaces and participate in female sports. “Misgendering” someone would be classified as a form of “sex discrimination.”

DeVos’ reforms were a response to the Obama administration’s “Dear Colleague” letter, which eliminated basic legal protections for students accused of sexual misconduct and led to more than 600 lawsuits (many of them successful) against universities. The hallmark of the “Dear Colleague” reforms was the “single-investigator” model, under which a single Title IX officer was tasked with both investigating sexual misconduct and determining the accused party’s guilt or innocence. In place of a formal hearing, the officer would meet privately with both parties and make a decision accordingly, serving as judge, jury, and executioner. An accused student would not have access to the evidence against him, only “a description of the relevant evidence,” making it harder for him to adequately defend himself against the other party’s claims.

The “Dear Colleague” letter also stipulated that universities use the “preponderance of evidence” standard. Biden’s regulations argue this is appropriate because “numerous courts have held that the preponderance of the evidence standard is a constitutionally appropriate burden of proof in civil actions seeking to impose liability for sexual assault and rape in State court.” This ignores the fact that in civil cases, this low burden of proof is balanced by procedures that protect the rights of the accused, which are not present in Title IX cases on college campuses. Additionally, in civil lawsuits, the litigants can negotiate a confidential settlement, whereas on college campuses, the accused student has no say in whether the “grievance process” is initiated, and if he is found guilty, it will mark him for life.

DeVos’ reforms, which took three years to craft, made the Title IX process much more transparent and balanced, reinstating students’ basic procedural rights. Colleges were required to hold live hearings involving cross-examinations of both parties, and both the accused and the accuser had access to any evidence obtained during the investigation. Decision-makers could not be employed by the Title IX officer, avoiding the bias inherent in the single-investigator model.

The Obama administration’s disregard for due process was so blatant that even some feminists, such as Harvard Law School professor Janet Halley, welcomed DeVos’ reforms. As expected, however, most progressives were fiercely critical. Catherine Lhamon, who enforced the Obama administration’s Title IX regulations, declared that the reforms marked a reversion to “the bad old days, that predate my birth, when it was permissible to rape and sexually harass students with impunity.” This is an egregious misrepresentation of the truth. If anything, DeVos’ reforms protected victims of sexual assault by forcing colleges to initiate formal investigations into their claims and hold live hearings instead of ignoring them. They only appear biased against victims relative to the old regulations, which were heavily skewed in favor of them.

Lhamon and others claim that DeVos’ reforms discouraged victims from coming forward. The argument that being cross-examined would be “traumatic” for the victim rings hollow given that DeVos’ reforms accommodated the desire of accusers to minimize contact with the accused party as much as possible. Students were given the option of conducting cross-examinations remotely, and the regulations stipulated that cross-examinations be carried out by advisors assigned to each party as opposed to the students themselves. If the prospect of being cross-examined discourages someone from filing an accusation of sexual misconduct, that says more about the plausibility of her allegation than anything else.

The Department of Education concedes that cross-examination is an effective means of uncovering the truth. It also notes that the Sixth Circuit deemed cross-examination a constitutional requirement for due process in Title IX cases in Doe v. Baum. Yet instead of following legal precedent, the Department suddenly pivots and claims that “questions asked in individual meetings” are more effective than cross-examination, citing a few academic studies. The studies they cite simply weigh the merits of the inquisitorial system employed in continental European countries versus the adversarial system and make a case for the former. Never mind that the inquisitorial methods prescribed by the new regulations bear a greater resemblance to the Star Chamber or the Salem witch trials than the judicial systems of modern-day Germany or France.

The Department cites the reduction of bias as a benefit of non-adversarial methods. This is ironic, because in the context of Title IX, bias against men accused of misconduct is baked into the process from the outset given that Title IX officers are mostly women and are apt to be “hammers in search of a nail” (after all, it is their job). If the Department genuinely cared about “reducing bias,” it would address this. The Department also does not address the fact that the single-investigator model is more vulnerable to corruption, which is of particular concern in the context of colleges, where, as the admissions scandal a few years ago demonstrated, corruption has flourished.

The Department admits that some courts outside the Sixth Circuit have cited Doe v. Baum in support of students’ right to due process. They state that “it is unclear from these decisions whether these courts would have held that such a right could be satisfied by indirect cross-examination at a live hearing or in separate meetings with the parties.” This evasion constitutes a serious flaw in the Department’s legislation. If some courts are likely to argue that the right to due process is not satisfied by private meetings, which many undoubtedly will given the unconstitutionality of the regulations, that puts colleges in a difficult position. Either they require cross-examination and are punished by the government, or they adhere to the new reforms and incur legal challenges.

The Department of Education further claims that “some postsecondary institutions described the live hearing and cross-examination requirements as too prescriptive and burdensome to apply effectively.” Since when have colleges shied away from administrative burdens?

The subtle changes to the definition of “sexual harassment” are also noteworthy. The old regulations, following Supreme Court precedent (Davis v. Monroe County Board of Education), defined sexual harassment as “unwelcome conduct determined by a reasonable person to be so severe, pervasive, and objectively offensive” that it interferes with a student’s education, while the new regulations define it as “unwelcome sex-based conduct” that is “sufficiently severe or pervasive.” Changing the “and” to “or” alters the definition considerably. If a socially inept student casually flirts on a handful of occasions with a girl who does not reciprocate his interest, these anodyne overtures could conceivably be construed as “sufficiently pervasive” and thus meet the definition for “harassment.” Perhaps “determined by a reasonable person” was removed from the definition because any reasonable person would object to this.

The use of the term “sex-based” broadens the scope of “sexual harassment” to include not only unwelcome sexual conduct, but also “harassment based on sex stereotypes, sex characteristics, pregnancy or related conditions, sexual orientation, and gender identity.” This has serious implications for freedom of speech on college campuses. A student who regularly criticizes feminism or the transgender movement in class could potentially be charged with sexual harassment.

All of this can be added to the list of reasons why young white men should think twice before attending college. Should you be accused of sexual misconduct, your rights cannot be guaranteed. If you must go to college because your future line of work requires it, avoid socializing with female students.

If you are accused of sexual misconduct and the accuser initiates the “grievance process,” familiarize yourself with your school’s Title IX policy and hire a lawyer immediately. Find witnesses and do not delete any of your interactions with the girl in question. Make audio recordings of every meeting you have with school officials. Do not make any statements to the school or the other party without consulting your lawyer.

It is hard to imagine a better example of the Left’s hysteria, uptight moralism, and indifference to truth than the new Title IX regulations, which undoubtedly will lead to a proliferation of false accusations and have a “chilling effect” on free speech on college campuses. On the bright side, this will awaken many young white men to the insanity that pervades academia and our country at large.

« See How They Run