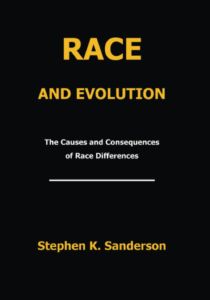 With all the scientific research we now have on the topic of race realism, suggesting a starting point for beginners can be a challenge. Do you start with psychometrics, evolutionary biology, anatomy, anthropology, social science, genetics, or neuroscience? The issue has been tackled in numerous ways and from various directions. Realizing that race realism research has indeed built up a sizable body of work over the past half century — and can be quite bewildering as a result — sociologist Stephen Sanderson (official website here) has produced a highly useful survey of it all in his self-published work, Race and Evolution.

The primary purpose of Race and Evolution is to convince the skeptical. Anyone with an open mind or anyone seeking to honestly refute race realism should come away from this book with their worldview fundamentally challenged. Race realism is based in truth, after all. Anyone looking at the data must concede this eventually. Sanderson not only provides the right data, he also makes a tremendous effort to persuade. Like many academics he started out on the Left, believing the pernicious lies of racial egalitarianism. Today, although he has gone full circle, he has not forgotten this mindset, and it is those who are still in it who he attempts to persuade.

Sanderson first debunks racial egalitarianism, point by point, as it is presented by two leading authorities of racial science, the American Anthropological Association and the American Association of Physical Anthropologists. You’d think that obviously false statements such as “Race as a worldview was invented to assign groups deemed inferior to perpetual low status and to permit groups deemed superior access to privilege and power” and “Human traits known to be biologically adaptive do not occur with greater frequency in one population than in others” would not need refuting, but Sanderson does so quite thoroughly.

He takes on common “nonexplanations” (read: excuses) for racial differences such as discrimination, dysfunctional families, historical oppression, and Critical Race Theory. While debunking the first nonexplanation above, he clearly demonstrates that when you control for IQ blacks perform as well as whites in many areas, including income and university graduation. Disparity is therefore the result of cognitive ability, not discrimination. When deconstructing the dysfunctional family excuse, he introduces the reader to the famous 1965 Moynihan Report as well to researcher Heather Mac Donald’s observation that the breakdown of the black family “is the greatest social catastrophe facing contemporary America and is the principal cause of poverty and crime among poor blacks.”

Sanderson then reminds us of the uncomfortable fact that while only 21% of black households with dependent children were run by single mothers in 1960, that figure today is nearly 70%. He concludes by sympathizing with Mac Donald but stating that her theory is incomplete. Yes, the breakdown of the black family has led to bad consequences for black people (and for everyone else), but what caused the breakdown to begin with?

Next, Sanderson establishes the genetic reality of race by referencing, among many others, Arthur Jensen’s groundbreaking 1998 study The g Factor, in which Jensen performed factor analysis on a set of 26 world populations:

Sanderson also includes the classic 2005 study by Hua Tang and others in which over 3,600 people of varying races were asked to self-identify with one of four racial groups: white, black, Hispanic, or Northeast Asian. The cluster analysis on the groups’ genetic markers revealed an astounding 99.86% correlation with the self-identification results. Sanderson helpfully provides a refresher course on statistics so the reader doesn’t get caught in the weeds when encountering factor analysis, regression analysis, and the like.

I was gratified to see his demolishing of Lewontin’s fallacy. Developed by evolutionary biologist Richard Lewontin in the early 1970s as a means to bolster race denial, this fallacy claims that racial classifications have no value because genetic diversity is much greater within a racial population than between the races. In 2003, geneticist W. F. Edwards noted that Lewontin’s analysis looked only at genes on single locus points on a chromosome, which tells us little about the population to which its owner belongs. Genes must be viewed instead as aggregated networks. When viewing, say, 20 genes at a time, the chances of mischaracterizing a person’s race become infinitesimal.

Sanderson then dives into intelligence research, and offers a working definition of g as a key dimension of intelligence. He cites Richard Haier’s crucial 2017 work The Neuroscience of Intelligence, which states the high correlation between g and structures and functions of the brain, such as

. . . brain size, neurotransmitters, neural conduction velocity, degree of myelination of axons, the amount of dendritic branching, glucose metabolism during mental activity, and electrical activity in response to a stimulus.

Twin studies, trans-racial adoptions, the bell curve, fluid intelligence, IQ heritability, single nucleotide polymorphism — it’s all there. Predictably, J. Phillipe Rushton and Richard Lynn receive much attention in these chapters. So does Tatu Vanhanen and his prescient analysis of the IQs of nations. In all cases, Rushton’s Rule of Three is observed in which Northeast Asians score the highest in any category, followed by whites, and then by blacks. It’s interesting how many of the figures mentioned above, such as Jensen, Rushton, and Lynn, are considered “white supremacists” when Sanderson’s chapters on them highlight the supremacy of Northeast Asians.

One element that Sanderson introduces that I have not seen before is a population’s percent-black score. This consistently correlates negatively with many positive societal outcomes. For example, in all 50 US states, the percentage of the population that is black has a -0.626 correlation with life expectancy and a -0.286 correlation with income. (A correlation of 1.0 would mean a direct relationship, like the number of dollars contained in a person’s bank accounts and stock portfolios and that person’s overall wealth. A -1.0 correlation means an inverse relationship, like a person’s debt and his overall wealth. A correlation of zero would mean the relationship of the two variables is perfectly random.)

Sanderson delves into anthropology, primarily discussing the behavioral differences between blacks, whites, and Northeast Asians. Rushton’s Rule of Three is followed here as well, especially when it comes to sexual and familial behavior (or misbehavior, as it applies most often to blacks). Anatomy and physiology are covered as well. So are racial differences in AIDS rates, reproductive potential, and overall sexual activity. Temperament and time preference differences are also discussed, with a special emphasis on black anti-social behavior, which is both severe and endemic.

Sanderson mentions political scientist James Q. Wilson’s and psychologist Richard Herrnstein’s observation that moral reasoning correlates highly with IQ. He then references Colin Flaherty’s popular books on black crime (White Girl Bleed a Lot and Don’t Make the Black Kids Angry) and Edwin Rubenstein’s invaluable The Color of Crime as proof of Wilson and Herrnstein’s theory. Most crucially, Sanderson does not forget to include the role the MAOA gene plays in impulse control as reported by researcher Kevin Beaver and others.

Finally, Sanderson discusses the origins of racial differences as explained by evolution. He condenses important concepts such as the Out of Africa, Cold Winters, and Life History theories into several pages each. He also discusses the importance of EQ (Encephalization Quotient), which is the ratio of brain size to body size. For example, Neandertals are considered to have had larger brains than modern humans, but a lower average EQ. He also gives an excellent rundown of r/K life history strategies and how they differ across races.

As you can see, Sanderson references many of the heavy hitters in the fields of race and intelligence research — with many others not mentioned above. A person beginning his journey into race realism could not do better than starting with this mid-sized, 350-page volume. The prose is clear and engaging, Sanderson provides many tables to help visualize the data, and he contributes his own research in many places as well.

Like any book, Race and Evolution is not without its shortcomings. I was disappointed not to find Steven Farron’s excellent The Affirmative Action Hoax referenced in the chapter dealing with affirmative action. Sanderson’s coverage of the MAOA gene likewise neglects to include a finding presented in Nicholas Wade’s A Troublesome Inheritance demonstrating racial differences in the ownership of this impulse-reducing gene’s promoters. Some of the history dealing with slavery and skin color preferences which Sanderson offers in the latter half of the book might be beside the point regarding his central thesis, but are interesting nonetheless. And he could have included more discussion of white slavery, both in the New World, and in the Old. But these flaws, if they are flaws, are all minor.

In the final analysis, Sanderson performs the critical task of providing the rock-solid scientific basis for race realism. We cannot thank him enough for doing this, and this book should be read by everyone who cares about the most important issue of our day: race relations and racial differences. Sanderson also distinguishes race realism from racism, and makes it clear that we should eschew the latter while embracing the former. This basically means we should accept racial differences without malice or evil intent toward other races. It’s unfortunate that Sanderson must reiterate such a basic moral platitude, but I believe, given his audience, it was absolutely necessary.

Sanderson ends Race and Evolution on a high note — at least for his Caucasian readers. While he follows the Rule of Three throughout the book, underscoring the superiority of Northeast Asians over other races in many categories, he violates it when discussing human accomplishment, which is essentially the story of Europeans. While referencing Ricardo Duchesne’s indispensable The Uniqueness of Western Civilization, he ascribes the vast majority of scientific and academic accomplishments to whites and openly praises Eurocentrism:

The Europeans also possessed a unique cultural perspective, a Faustian spirit or a rational restlessness. This is a quest for truth, to understand nature, and to seek ultimate knowledge. It involves a restless inquisitiveness, a desire to explore and discover.

Nowhere can we find a better example of this unquenchable Faustian spirit than in Stephen Sanderson’s Race and Evolution.