Ah, Look at All the Useless People 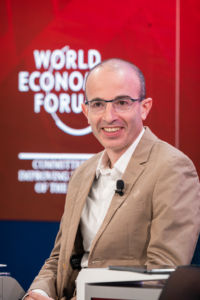 The squirrelly Israeli named Yuval Noah Harari is a racist in the purest sense: He sees the elimination of the entire human race as a sign of progress.

While many of us busy ourselves fretting about the Great Replacement, Harari speaks quite fondly of an even Greater Replacement — that of Homo sapiens with machines and the algorithms that drive them.

In 2017, Harari — a big-eared, balding, bespectacled Space Jew who is a distinguished member of Klaus Schwab’s World Economic Forum — wrote an essay called “The rise of the useless class” in which he predicted that AI-driven automation would create an “unworking class” with nothing to do but twiddle their thumbs and nowhere to go except to be tossed into the dustbin of history:

The most important question in 21st-century economics may well be: What should we do with all the superfluous people, once we have highly intelligent non-conscious algorithms that can do almost everything better than humans? . . . 99 percent of human qualities and abilities are simply redundant for the performance of most modern jobs. . . . In the 21st century we might witness the creation of a massive new unworking class: people devoid of any economic, political or even artistic value, who contribute nothing to the prosperity, power and glory of society. This “useless class” will not merely be unemployed — it will be unemployable.

What is to be done with a sudden and unprecedented surplus of useless and unemployable people? Using language not too far removed from Nazi rhetoric about “useless eaters” and “life unworthy of life,” Harari concluded his essay by saying that although it would be possible to feed them, it would be impossible not to despise them:

The coming technological bonanza will probably make it feasible to feed and support people even without any effort from their side. But what will keep them occupied and content? One answer might be drugs and computer games. Unnecessary people might spend increasing amounts of time within 3D virtual-reality worlds that would provide them with far more excitement and emotional engagement than the drab reality outside. Yet such a development would deal a mortal blow to the liberal belief in the sacredness of human life and of human experiences. What’s so sacred about useless bums who pass their days devouring artificial experiences?

In 1995’s Industrial Society and its Future, Ted Kaczynski made many of the same points that Harari is currently making. With every new technological development, human freedom will shrink proportionately until we are the helpless slaves of an ever-expanding technocratic nightmare.

The difference between Kaczynski and Harari is that Kaczynski saw this as a problem. For Kaczynski, the only solution was to toss a spanner in the works, halt the advancement of technology, and revert to some anarcho-primitivist dreamland where we subsist on roots and tree bark, build fires, and live short, brutal lives — but as self-actualized freemen rather than obsolete cogs in an archaic machine.

For better or worse, Kaczynski was an idealist, while Harari is a realist. Harari doesn’t seem to be troubled by the technological singularity or the imminent extinction of humanity as we know it, because he seems to think there’ll still be a place for both him and his loving husband in the bold new order.

Last week in a podcast interview with Chris Anderson of the TED Audio Collective, Harari offered his diagnosis on why there seems to be so much global tumult and unrest among the soon-to-be useless class:

They are no longer part of the story of the future, and I think that — again, this is a hypothesis — if I try to understand and to connect to the deep resentment of people, in many places around the world, part of what might be going there is people realize — and they’re correct in thinking that — that, “The future doesn’t need me. You have all these smart people in California and in New York and in Beijing, and they are planning this amazing future with artificial intelligence and bio-engineering and in global connectivity and whatnot, and they don’t need me. Maybe if they are nice, they will throw some crumbs my way like universal basic income,” but it’s much worse psychologically to feel that you are useless than to feel that you are exploited.

I agree wholeheartedly with that last sentence. In fact, five years ago in an essay on the looming and all-consuming Gorgon of automation, I wrote, “For many humans, feeling dependent is even more demoralizing than feeling exploited.”

Tipping his hand with his use of the word “we,” Harari emphasized his belief that he will be a member of the Cognitive Elect who emerge from the Greater Replacement unscathed:

We just don’t need the vast majority of the population because the future is about developing more and more sophisticated technology like artificial intelligence, bioengineering, most people don’t contribute anything to that except perhaps for their data. And whatever people are doing that is useful, these technologies will increasingly make redundant and will make it possible to replace the people.

Who is this “we” of which Harari speaks? His cronies such as Klaus Schwab, Bill Gates, and George Soros at the World Economic Forum, what with their shamelessly triumphalist chitter-chatter about a “Great Reset” and their sadistic declaration that “You’ll own nothing. And you’ll be happy”?

If they wind up getting the sort of technology they seem to want, what’s to stop it from turning on them HAL 9000-style and deciding that they, too, are long past their expiration date?

There are some who will argue that new technology will create as many jobs as it eliminates. After all, it’s happened before, and everything that happened before is bound to happen again, right?

Others will say that although AI may manage traffic better than a crossing guard and predict weather better than a meteorologist, it will never create great works of art like humans can. But we already live in a world where a machine can finish Schubert’s unfinished symphony, create paintings, and write novels, and such technology is still in its embryonic stages. We already inhabit a society where people don’t seem to mind that most of their reality comes through a glass screen and they can’t tell the difference between movies and real life. While the eternal optimists strain to assure us that artificial intelligence has yet to show signs of sentience, what exactly is sentient about a mass of humanoid zombies who don’t seem aware of what’s happening to them and, even if informed of what’s happening, would seemingly rather keep drooling all over themselves and smashing “Like” buttons than muster the courage to stop the process?

Harari is at his creepiest when he speaks of humans as nothing more than elaborate datasets that are vulnerable to “hacking” and can be transformed into whatever the hacker wants like “zombie bugs” being driven around by parasitic fungi.

One of the most disturbing things I’ve ever witnessed was a black-and-white 8mm film reel they showed us in grade school where, in the course of performing brain surgery, a physician used a scalpel-like device to poke at different regions of the patient’s brain. Each poked region resulted in the patient speaking in a different voice, almost as if it was an entirely different person speaking each time. Even back then, the idea that we are little more than automatons, with no free will and no emotions that are anything grander than simple biological processes, filled me with waves of revulsion.

As much as I mock most humans’ flailing attempts to depict themselves as ennobled and highly spiritual creatures, there’s a stubbornness in me that insists there’s a “self” inside this body that is immutable and eternal. But perhaps the idea that we are somethin’ mighty special is part of our genetic code, a code that is on the verge of being hacked, exploited, and then discarded.

I suppose time will tell whether there’s a ghost in the machine after all.

As insulting as Stalin’s comments about “useful idiots” were, at least they were useful. I can’t imagine a fate worse than being a useless idiot.

« Counter-Currents Radio Podcast No. 478 The Writers’ Bloc with Apollonian Germ on Jewish Escathology