Memoirs of a Jewish German Apologist 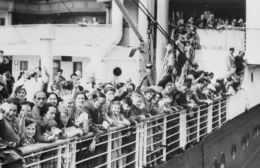 Heinz Hermann Weichardt was born to a German father and a Jewish mother and spent his young adulthood in the Third Reich. In in his February 1995 memoir Under Two Flags, he gave a concise but very revealing account of his tribulations as a Mischling in the first degree.

« I Dream of Djinni: Orientalist Manias in Western Lands, Part One