Some Thoughts on Hitler 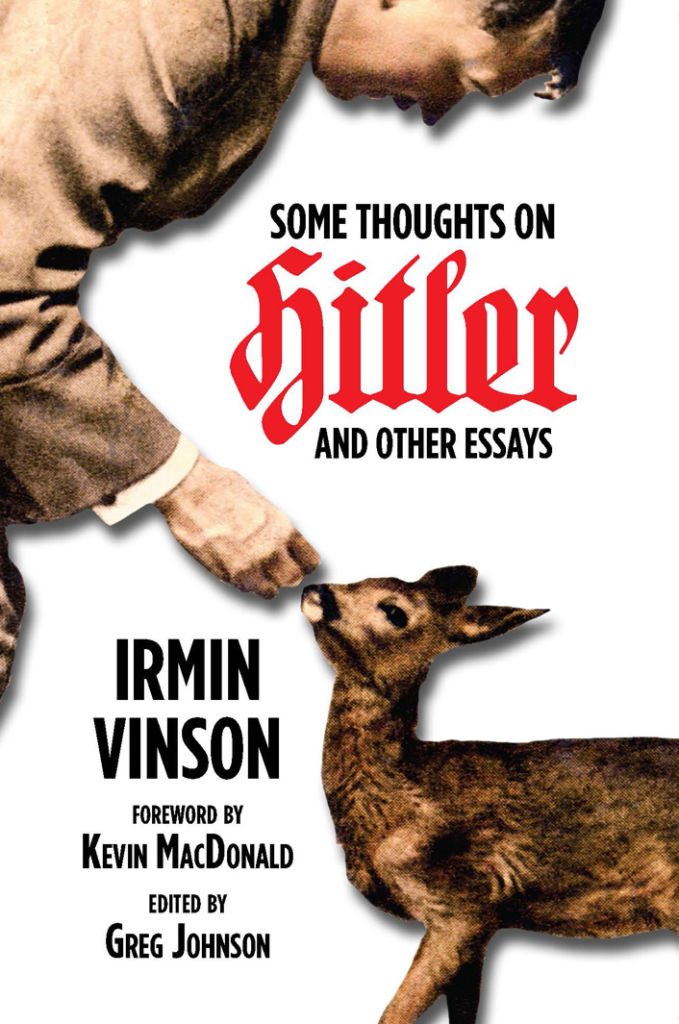 Some Thoughts on Hitler & Other Essays

About Some Thoughts on Hitler:

Why are we subjected to more anti-Hitler propaganda today than during World War II?

Why are white nations blanketed with Holocaust memorials, even countries where the Holocaust did not take place?

Why do most people know how many Jews died during World War II but have no idea how many non-Jews died?

Irmin Vinson’s Some Thoughts on Hitler and Other Essays is a book about propaganda. Vinson explains how the organized Jewish community uses the memory of Adolf Hitler and the Holocaust as weapons to stigmatize the patriotism and ethnic pride not just of Germans, but of all whites, including those who fought against Hitler.

Vinson explains how this spurious white guilt and self-hatred has been used to break down white resistance to multiculturalism, miscegenation, affirmative action, and the invasion and colonization of white homelands by non-white immigrants—trends which, if not reversed, will lead to white extinction.

In these clear, rational, and highly readable essays, Irmin Vinson exposes and demolishes this insidious propaganda, clearing the way for the reemergence of white pride and patriotism. Some Thoughts on Hitler will change more than your view of the past; it will also change your understanding of the present—and of our destiny.

Praise for Some Thoughts on Hitler:

“Irmin Vinson is a sophisticated thinker and eloquent writer about all of the issues at the heart of the dispossession of whites. I highly recommend this collection of his essays.”

— Kevin MacDonald, Ph.D., author of The Culture of Critique

“This collection of thought-provoking essays is a valuable antidote to the Judeocentric view of the past and present that’s become all but obligatory in our society. The author does not attempt a revisionist reexamination of the wartime fate of Europe’s Jews. Instead, he explains why and how the quasi-religious ‘Holocaust’ narrative has come to play such a prominent role in our mass media and cultural life.”

“This provocatively titled book focuses on the moral and political offensive against European culture and peoples. Vinson shows that a perverse and dishonestly contrived pseudo-morality is being cynically used as a battering ram against Europeans by those who are themselves motivated by base impulses in a classic case of mass psychological projection.”

— Kerry Bolton, Ph.D., Th.D., author of Artists of the Right

The Jewish Question
3. Holocaust Commemoration
4. Remembering the Holocaust
5. Spielberg and the Eleven Million
6. The Mufti and Martin Hohmann
7. The Holocaust as Weapon
8. The Patriot: Reviewing a Review
9. Gibson, Jesus, and the Jews
10. Jesus and the ADL
11. Jewish Hypocrisy and the One-State Solution
12. Ruling the World by Proxy

The Muslim Question
13. Jews, Islam, and Orientalism
14. Abrogated Verses in the Koran
15. The Lessons of Madrid

White Ethnomasochism
16. Wagner and Multiracialism
17. Some Remarks on “Racism”
18. Amy Biehl: A White Liberal on the Dark Continent
19. Jane Elliott and Diversity Training

Irmin Vinson is the editor of Irminsul’s Racial Nationalist Library, http://library.flawlesslogic.com/. This is his first book.