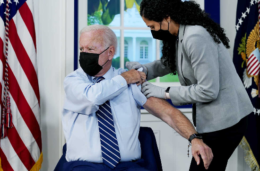 Joe Biden allegedly getting his booster shot on Monday.

An image surfaced this week which, better than any other, sums up the zeitgeist of our age.

A few days ago, Joe Biden was filmed receiving his COVID booster shot and the event was heavily promoted by the media. The President is leading by example, you see. When Joe Biden tells you to go get the vaccine, he’s not telling you to do something that he’s not willing to do himself. In fact, he’s going to show you how unafraid of the vaccine he is. You can watch him personally receive it in the Oval Office, and he’s going to have it administered to him by a strong woman of color (who you should also not be afraid of).

Then, shortly afterwards, pictures like this started to emerge: 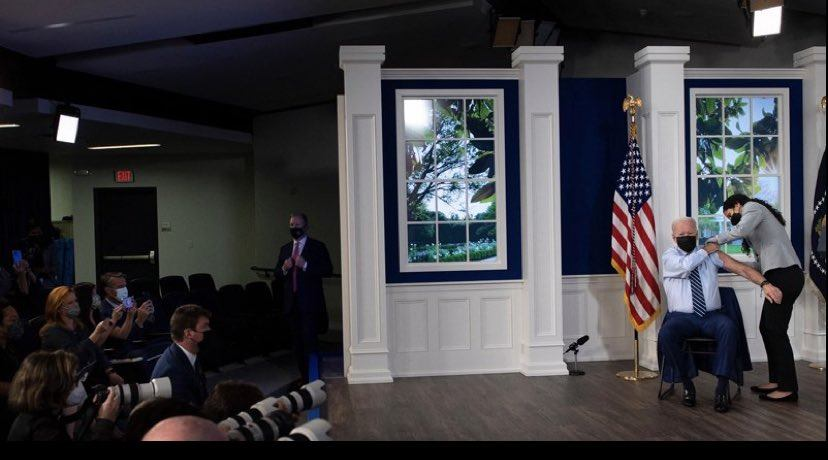 That is certainly a breathtaking image. It’s one of those pictures that deserves the “If you only knew how bad things really are” label on it.

I had assumed from the outset that his booster shot photo op was staged propaganda, but I didn’t think it was literally taking place on a stage. Several questions immediately come to mind. Why didn’t they just do the photo op in the Oval Office? If the room he was in is a fake, what else is fake? Was he really getting a COVID booster, or was that also fake? Is that masked man really Joe Biden? Is that strong woman of color really a doctor? Is she really a woman? Is she really of color or is the tan sprayed on? It’s completely disorienting to behold.

Suddenly, the idea of the Moon landing being filmed on a sound stage sounds more plausible.

The image is striking, but it shouldn’t be. At this point, everyone knows that politicians are basically actors. They play the part of the patriotic servant of the people, but at heart, they are merely spokesmen for the donor class and the Deep State. They have a script and try to deliver the lines as convincingly as they can. I already knew these guys were puppets, but it is something else to actually see the strings. It’s like when you’re watching an old, low-budget movie and the boom mic comes into view. It breaks your concentration, momentarily snaps you out of the trance, and suddenly you can no longer suspend your disbelief.

These images of Biden have gone viral on social media and have understandably caused him some embarrassment. Never fear: Politifact has come out to debunk the conspiracy theorists. As with Snopes, Politifact likes to “debunk” factual things by addressing a very specific version of a claim that isn’t necessarily the one people are actually making, and which doesn’t really address the thing people are really concerned about.

Here, Politifact is trying to debunk the claim that the White House created a fake set for Biden’s booster shot photo op, and that those who believe they did are by association claiming that the entire Biden presidency is a giant charade. Notice how very specific those claims are.

The second strawman is that most people are not assuming that the set was made specifically for this particular photo op — but this is the angle that Politifact ran with. They responded to this questionable assertion by saying:

Our research uncovered no evidence that the White House intended to mislead anyone by using the windows-and-white-columns background. The backdrop had already been used in one official event five days before Biden received his booster shot.

First, the real point at issue is the fact that there is a set of the Oval Office, and that it was used to make it appear as though Biden was there when he in fact wasn’t. It’s still a set of a fake Oval Office. Why does it exist at all?

Second, there was clearly an intention to mislead people into thinking that it was the Oval Office, or at least some room in the White House that has a picturesque view through its windows. When you think of the President being in a room with windows behind him, you think of the Oval Office. It’s actually the fake windows that are the creepiest part of the picture, because they are quite convincing. There are trees visible, just like the Oval Office has.

Politifact also points out that the room where the photo op took place was the South Court Auditorium of the Eisenhower Executive Office Building, which is technically connected to the White House. They also point out that this location was listed on the official transcript of Biden’s speech on the White House website.

The Oval Office is one of the most iconic rooms in the world, where much history has been made. Seeing Biden take the booster shot in the Oval Office has a lot more gravitas than watching him take it in the South Court Auditorium of the Eisenhower Executive Office Building. Thus, clearly there was some intentional deception going on.

As political lies go, it’s a pretty small one. It’s a lot smaller than claiming that Saddam Hussein had weapons of mass destruction, or that the Clintons didn’t kill Vince Foster. Nevertheless, it’s a lie that has no clear purpose — which makes it that much weirder.