The Slow Death of Whitetown, USA 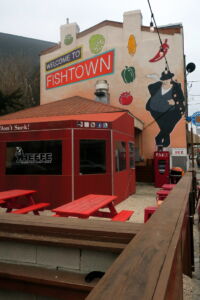 The corner of Kensington and Allegheny Avenues — known colloquially as “K&A” — is the Hollywood and Vine of poor-white Philadelphia. K&A is also a major subway stop on the Market-Frankford subway line that runs eastward from K&A all the way up into Northeast Philly, also known (for reasons that should be obvious) as “The Great White Northeast.” An elevated line throughout that part of town, the train runs westward and then tunnels underground into Center City — they don’t call it “Downtown” in Philly — and then back above ground out past mostly black West Philly.

For a long time, Kensington Avenue marked the unofficial dividing line between working-class white Philadelphia and non-white Philadelphia. To the east of Kensington Avenue, all the way to the Delaware River, lived the scrappiest and most hardcore poor whites I’ve ever seen in this country, and I’ve been to Appalachia and throughout the Deep South. To the west of Kensington Avenue lies an area known as the “Philadelphia Badlands,” which is primarily Puerto Rican. As someone who spent years driving a cab in Philly, I can vouch for its moniker. At least in the early ‘80s when I was tooling around the City of Brotherly Love’s potholes in these giant old Checker Cabs with 800K miles on them, it was the worst part of town. Further west of the Badlands is the giant sprawling black war zone that is North Philly. For decades, the Puerto Rican Badlands served as a buffer between all-black North Philly and the mostly Irish poor whites of what used to be known as the “River Wards.” But all of it — the River Wards, the Badlands, and North Philly — rivals just about any awful slum in the country for sheer dilapidated horror.

Running underneath the elevated subway, Kensington Avenue is also — or at least, it used to be — the shopping center of a neighborhood largely known as Kensington. I say “used to be” because most of the old shops appear to be shuttered these days, and I say “largely” because the City of Philadelphia hasn’t designated hard geographical boundaries for its neighborhoods, so you wind up with the part of the Badlands directly adjoining the elevated subway known as “West Kensington.” You also have the neighborhood called Fishtown — so named because it used to be home to a bustling fishing industry –, now considered a separate neighborhood from Kensington, even though Fishtown was originally known as “Old Kensington” even before Kensington was called “Kensington.”

Most Americans are likely aware of Kensington because it’s the hardscrabble neighborhood where Rocky Balboa lived in the Rocky movies. I quibble with the historical accuracy of placing Rocky in Kensington, because the dagos tend to live in South Philly, and where I come from, the Italians and the Irish don’t get along very well.

Of late, Kensington is known as the biggest open-air drug market on the East Coast, aka “The Walmart of Heroin.” There have been several documentaries made about its junkie tent camps. Over the past few months, viral videos have emerged of the nightmarish post-apocalyptic zombies shuffling slowly amid trash, hanging onto street signs, peering out of tents, shooting up, and nodding out along Kensington Avenue and the narrow streets nearby. Most of the videos center around K&A. Here’s one of Kensington at night over the past winter. Here are the “highlights” of daytime street life in Kensington from July and August of this year.

Although I am clearly white in the national and global sense, culturally I identify as Philadelphian more than anything else: crass, blunt, cantankerous, and obscene. As much as I’ve tried to exorcise it from my tongue, I still carry traces of that awful accent, especially when upset and not trying to mute it. In moments of duress, the Philly accent simply pops out of my mouth.

I grew up about 16 miles from K&A and roughly five miles from the western border of Philadelphia in a working-class brick row home in the township of Clifton Heights, Pennsylvania. There were no blacks or Puerto Ricans in my neighborhood. The only two “races” were the Irish and Italians, and all of us seemed to be Catholic. Around age 21, when I moved into the city to attend journalism school at Temple University — right in the middle of the cannibal’s pot of the Mau-Maus who ruled North Philly — I drove a cab on weekends to feed myself and pay the rent. And when I first started driving around the haunted urban tundra of Kensington and Fishtown and their tightly-packed brick row homes that were built over a hundred years ago, I was seized with a grim fascination. There seemed to be so much history there that, over time, had become corroded and degraded. I took this picture of a blown-out church in Fishtown back then. You can see the elevated subway in the background. And here’s a rough-looking peroxide-blonde white girl standing with her dog on a frosty day in West Kensington.

Although I didn’t attend, my friends went to a Dead Kennedys show at the Starlite Ballroom near the corner of Frankford and Lehigh under the elevated subway in Kensington. As they told the story, DC skinheads had come up for the show and started a brawl with the Philly punks. Outraged that these degenerate freaks had invaded their turf, the shirtless, mullet-headed, snaggle-toothed Kensington dudes showed up and beat the fuck out of everyone.

One brutally cold night in the early ‘80s, a college friend and I swallowed some mushrooms and walked throughout Kensington and Fishtown through the dirty slush, both of us feigning caustic Philly accents merely to show respect for the locals. I was editor of the college magazine, and that friend contributed an article about Kensington’s struggle to escape total economic annihilation. As bad as it was, we both had a fondness for Kensington’s uniquely tough whites.

I used to park my cab at K&A right across the street from the subway station waiting for the white people who didn’t own a car to complete their trip home into Kensington’s crumbling streets. It would be impossible for me to forget the time two women in their 20s or early 30s got in my cab’s back seat along with their two kids and started openly talking about how great the “crank” (Philly’s slang for crystal meth) that Billy and Joey and Tommy had cut out for them the night before was, and what a great time they all had. Even for me, to hear two women talk in front of their kids about snorting crank was shocking.

But now, Kensington is worse. Far worse. How did it get there?

Before the Evil White Man arrived, the area around Fishtown — originally known as “Old Kensington” — was inhabited by the Turtle Clan of the Lenape Indian tribe. In the early 1730s, Old Kensington — still distinct from the City of Philadelphia — was founded by a white slaveowner named Anthony Palmer, an English merchant who had come to America by way of Barbados. Nearly all of the early white settlers to this area were English.

By the early 1840s, Irish-Catholic immigrants had moved into the Kensington area and were met with sharp hostility by the native Scots-Irish Protestants. A minor dispute over whether Catholic schoolchildren should be allowed to read the Catholic version of the Bible in class blew up into what were known as the “Nativist Riots” in May and July of 1844. At least fifteen people were killed. Two Catholic churches were burned to the ground. In the New World, the Protestants and Catholics were merely reenacting an age-old war from their island homelands, back where there was no real meaning to the term “white” because everyone there was white. The genocidally anti-white Noel Ignatiev mentioned Kensington’s Nativist Riots in his book How the Irish Became White as “proof” that there’s no such thing as white people.

By the late 1800s, Kensington had become industrialized. In an 1891 pamphlet merely titled Kensington, a businessman described the neighborhood as

[a] city within a city, nestling upon the bosom of the placid Delaware, filled to the brim with enterprise, dotted with factories so numerous that the rising smoke obscures the sky, the hum of industry is heard in every corner of its broad expanse. A happy and contented people, enjoying plenty in a land of plenty. Populated by brave men, fair women and a hardy generation of young blood that will take the reins when the fathers have passed away. All hail, Kensington! A credit to the continent, a crowning glory to the city.

Although the area slowly declined from then into the 1940s, revving up the war machine for the Second World War gave Kensington a much-needed economic shot in the arm. The shipyards and factories worked overtime. But then came the 1950s and the slow rot of deindustrialization.

Peter Binzen’s 1968 book Whitetown, USA spends much of its middle section on Kensington’s condition in the late 1960s. He pegged Kensington’s white quotient in that year at 99.7%. “The lower-class whites especially,” he wrote, “are a closed people moving in tunnels.” He claimed that the Catholics ruled the city government at that point but would eventually be replaced by blacks: “In changing times, the Whitetowners oppose change. . . . Kensington’s intolerance is so savage because its people are so insecure.”

In the 1980s, when I picked up those crank-snorting moms and their kids at K&A, Kensington’s criminal underworld was ruled by Irish mobsters known as the “K&A Gang,” who controlled the city’s meth trade and were said to have ties with the Irish Republican Army. But over the years, as the city’s demographics changed, the K&A Gang gradually lost clout to encroaching Puerto Rican and black vendors of heroin and cocaine.

In 2011, a serial killer who became known as “The Kensington Strangler” for choking three women to death turned out to be a Hispanic named Antonio Rodriguez.

Kensington is clearly at death’s door.

The adjoining neighborhood of Fishtown, which was always more residential than the largely industrial Kensington, still shows signs of life. Kensington’s neighbor to the southwest made national news in 2020 when bat-wielding white dudes took to the streets to stop the BLM riots from entering their hood. A clip of some Fishtown boys challenging Antifa members to fistfights and telling them to “take that fucking faggot energy and go somewhere else” warms my heart. It’s the same accent and the same attitude as the shirtless Kensingtonians who routed the punks and skinheads from their neighborhood in the early 1980s.

In his 2012 book Coming Apart: The State of White America, 1960-2010, Charles Murray gave a nod to Fishtown as a symbol of white working-class dissipation.

Kensington’s little brother Fishtown still has some people who are ready to fight, whereas all the fight appears to have been beaten out of Kensington.

It’s a place with a lot of history but no future.