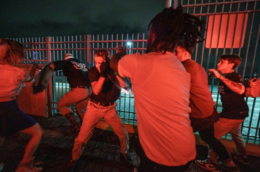 I always wondered how veterans of WWI must have felt 20 years after the Armistice watching Europe careen towards another European conflict. How did they feel while remembering all the sacrifices they made, the suffering they witnessed, and the friends they lost? During the war, the only thing that made it bearable was the conviction that it would be the last time the world would ever go through such an ordeal. But two decades on, it looked like the nations of Europe were about to go through it all over again.

“What, then, was it all for?” they must have wondered. I can probably never know how those people felt, but after last weekend, I think I have something of an idea.

People forget some of the absolutely retarded things people were saying before the Optics War. I remember people saying that we need to be filmed getting in fistfights with Antifa. You see, people are drawn to strength so if people see a lot of videos of getting in fistfights with Antifa, that will make people want to join us. Well, it’s good to see that the Popeye School of Political Science is still producing graduates.

More than anything, the Optics War was over two things a) the utility of public rallies and b) how to tailor the message to a mass audience. There is still a lot of disagreement about B, but almost everyone who was around during that time has come to agree that yes, explicitly White Nationalist public events are a bad idea. None of the OG Wignats from 2017-18 are still saying that we need to be out marching in the streets. Not TRS, not Richard Spencer, none of them. We still disagree on messaging, but if nothing else, there is a shred of consensus on that much.

The Optics War was a brutal and vicious struggle. People were doxed, permanent enemies were made, and the consequences reverberate to this day. But on the upside, we at least we resolved the whole question about public rallies and would never have to deal with that again. Or at least not for the foreseeable future. Or so I thought.

Then Sunday morning, I find out that Patriot Front staged a march in Philadelphia on Saturday. As I watched clips of Patriot Front members running away from counter-protestors and pictures of them being questioned by the police, I had some understanding of how those WWI vets must have felt in 1938. My reaction was something along the lines of “GOD DAMN IT! What are you doing? I fought a fucking Optics War to prevent this from ever happening again! I saw my comrade Ricky Vaughn get doxed trying to stop shit like this! Why? Why are you idiots doing this?”

I’m not sure what exactly the purpose of doing these public marches is. If they go perfectly, the media ignores them. If they go poorly, they become national news stories. If they go perfectly, they are temporary morale boosts for our side which are forgotten about in a couple of weeks. If they go poorly, they become public relations disasters that haunt you for years. It’s like flipping a coin: if it’s heads, you get 10 cents, and if it comes up tails, you have to pay $10,000. You either break even or you lose big. There is no possibility of hitting a jackpot.

In this case, things went somewhat less than perfectly. There is video of Patriot Front running from counter-protestors which is being spread around by enemy media. Worst of all, members of PF were interviewed by police who collected all their information. 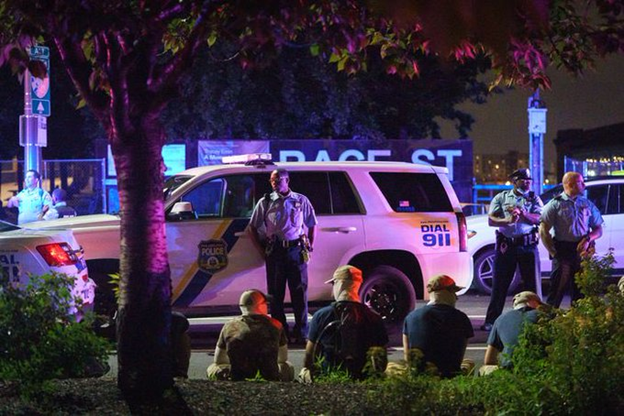 That is especially bad news because, in the weeks leading up to the march, members of Patriot Front allegedly defaced a couple of George Floyd statues in Brooklyn and New Jersey. I say allegedly. I suppose it’s possible that someone else did it and they are trying to frame Patriot Front for it by spray painting it. But if those statues were defaced by PF and those same people also went to the Philly march, they are now in danger.

Members of Patriot Front have claimed the night was not a bad result because no one was arrested, injured, or doxed. That last part is not true. Antifa has already identified several people in attendance. They also note that they have done a few marches in the past all of which have gone off without a hitch. I dunno. Maybe that’s true. But then again, the Alt-Right pulled off a few trial runs before Charlottesville that went off with no problems. The fact is that they are still playing Russian roulette with these marches. If you keep playing, you are guaranteed to eventually get the bullet. It only takes one march going wrong before a world of pain is opened up.

The one thing that Patriot Front did right is that they managed to plan and organize the rally without anyone learning of it in advance. 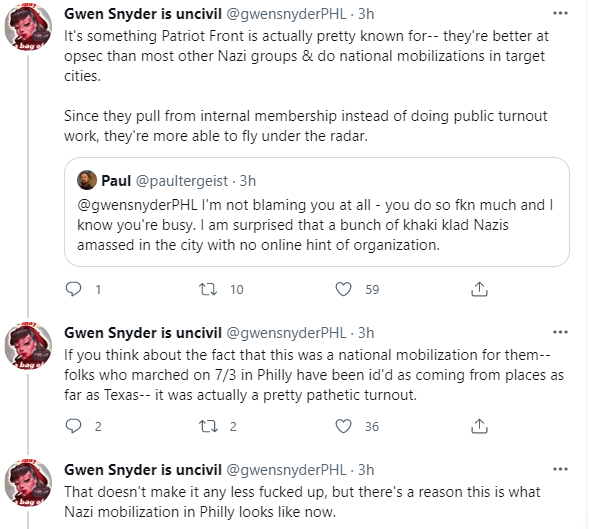 Despite Patriot Front’s admittedly superb opsec, Antifa are still declaring the rally a propaganda win for their side. 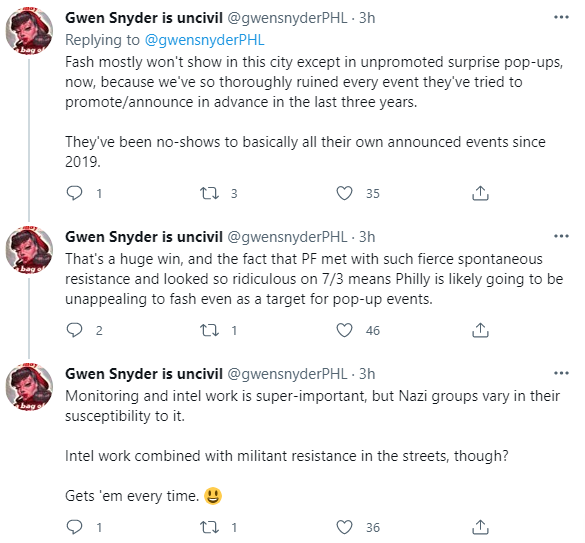 You can expect Antifa to rework their tactics in response. Either they will get one of their own people to infiltrate Patriot Front, or now that the feds will be monitoring the communications, they might be able to get tipped off. Or maybe they will develop some new rapid response system. I don’t know, but I’m sure they will find a way to counter this new kind of guerilla activism.

No White Guilt made a good video where he gave Patriot Front a pretty thorough tongue-lashing. However, looking at the comments from Patriot Front members was really disheartening. 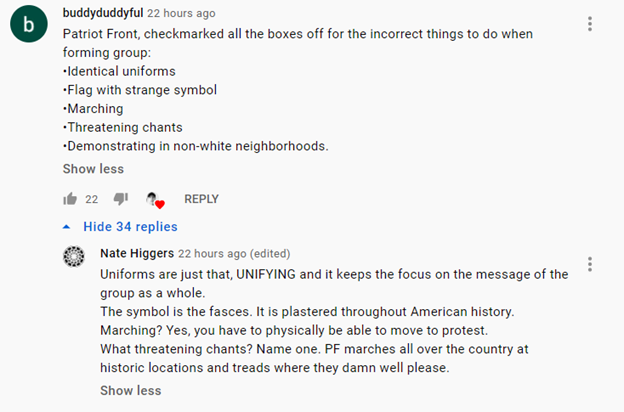 Defending the uniforms. Now there’s a blast from the past.

There’s more macho talk about displaying strength. Another graduate from the Popeye School of Political Science. Did the Left take power by “displaying strength”? No. In fact, they did the opposite. They went out in the streets dressed in drag or wearing leather thongs and feather boas. 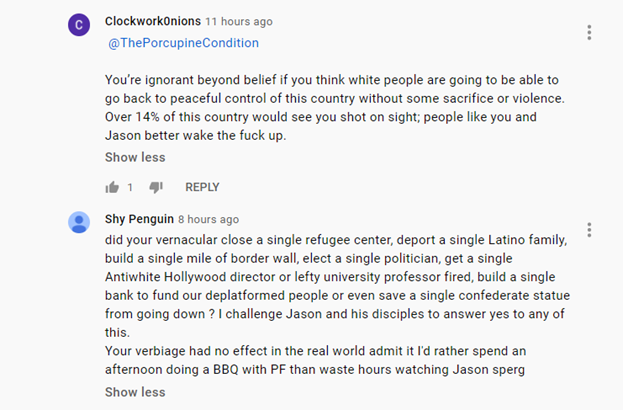 This is just depressing. It’s all the same talking points from three years ago. It’s like the Optics War never happened. I can’t even be bothered to argue with these people. I know I should because once these guys inevitably roll snake eyes, the establishment is not going to retaliate against just them but against all of us. And yet, I just can’t bring myself to fight another Optics War. If these guys don’t get it by now, they are never going to. Or if they ever do learn, it will be the hard way.

Patriot Front are heading towards another Charlottesville. I’m reminded of the concept of “eternal return.” I wonder if maybe this is just something we are going to have to go through again and again every few years.

Every few years, a new generation of whites is going to become redpilled on our situation and wonder why no one wants to do anything about it. All the old vets will explain “Okay, here’s the deal. Doing something right now is a bad idea because X, Y, and Z. We need to sit tight and wait for the situation to change. In the meantime, we spread the message, work on shifting the Overton Window, build communities, and maybe get involved in local normie politics until an advantageous opportunity arises.”

The young kids will say “All your talking hasn’t done anything! I’m gonna go do something!” They will then charge the establishment, get crushed, and figure out “Oh, so that’s why we’re not doing anything right now.”

And then a few years later, a new generation of whites will come along, get redpilled on our situation, and ask why no one wants to do anything about it. The old vets (including that last generation) will explain “Okay, here’s the deal. . .” and the kids will be like “Screw that! I’m gonna do something!” before running off and getting crushed by the establishment.