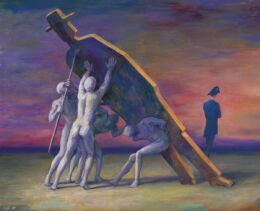 When the Soviet Union was new, there were those of us Stalin turned to for our particular skills. We were trained to turn men’s minds to our will. This is Stalin’s psychic legacy.

When we use the words “controlled opposition,” we usually mean that someone has been paid or is even employed by any of our enemies to play the part of the opposition to the regime in order to act as a resistance sink — to absorb Right-wing energies and pump them safely out of the system, divert them into pointless efforts, or perhaps deliberately lose in order to demoralize the opponents of the regime. We think of controlled opposition leaders as pied pipers leading us to ruin, or as sacrificial lions set up to spectacularly fail in order to crush our spirits. I won’t lie to you and say there aren’t such entities out there. Eastern Europe and Russia abound with them, because the states of Eastern Europe still live with Lenin’s dictum that “the best way to control the opposition is to lead it ourselves.”

But Lenin, alas, was wrong. As we should already expect by now, the West is far better at totalitarianism than the East.

In the East, such opposition that is allowed is usually run by counterintelligence agencies for the reasons listed above. Cointel operatives or outside contractors appear in the political discourse out of nowhere, are showered with media attention promoting them as “a dangerous opposition figure who has the government worried,” a bold person with a vision. The media might even play their part as the bogeyman and write egregiously false hit pieces on these controlled opposition leaders. They might even have a groundswell of astroturfed popular support on loan from the intel services, or perhaps another force backing them with covert institutional support under a thin veneer of institutional opposition. Here in the East, we are used to such creatures and we consider them part and parcel of the normal political landscape. Most of us can sniff them out after only a cursory examination. And now we’re seeing the rise of such figures in the West as well. This lengthy and extensive Revolver piece more or less alleges that the Oathkeepers’ leader Stewart Rhodes is a federal informant, if not an agent. The observations pass muster. But the West has far more sophisticated methods of running controlled opposition.

If the article is right and the Oathkeepers is a controlled opposition outfit, and has been one since 2009, this tells you a thing or two about the nature of politics in America. Of course, from a regime standpoint, it makes perfect sense to prop up an organization that appeals to patriotic veterans, servicemen, and policemen, allowing the regime to drag any opposition to itself within the security services by the nose whenever they become too big for their britches. Note also that the Oathkeepers’ aims, goals, and means never went outside the Overton window. Stewart Rhodes was a libertarian (tfu tfu) blogger before founding the Oathkeepers. The danger of (overwhelmingly white) regime-skeptical veterans, servicemen, and cops coming in touch with white identitarian thought is simply too great. This brings us to the main point. Now that Stewart Rhodes has been revealed as a fed and the Oathkeepers exposed as a controlled opposition group, the honest veterans, servicemen, and policemen who joined, hoping to “uphold their oaths to protect the constitution against enemies foreign and domestic,” will presumably be cagier about joining such organizations in the future, but unless they face some unpleasant and dangerous truths about the human condition, they will remain in a state of controlled opposition — specifically mind-controlled opposition, with no need for federal handlers and honeypots. People who, though they may oppose the regime and its latest excesses, nevertheless do not grasp its true nature, nor do they understand the root of its central organizing ideology, nor do they recognize the barriers the regime has erected against wrongthink within their very heads. A self-minding flock of sheep, if you’ll forgive the metaphor, for bigger and more creative minds within America’s government than the hamfisted FBI which cannot even run a decent limited hangout op these days have built the mother of all mind control machines.

As the opening quote will tell you, I grew up playing Red Alert 2 in the 2000s. In that video game, it is the Soviet faction that specializes in mind control, which is direct and practiced by specialized psy-corps commandos whose native talent for mind control has been augmented to the point that they can compel an enemy soldier to shoot his friends and protect his enemies, but alas, any one psy-corps commando can only control one enemy at a time and he also has a minimum range he has to maintain in order for the enemy to be controlled. That is mind control in video games. In real life, mind control is less direct, but far more permanent.

The very idea of video game mind control is to compel someone to do things against his will. In practice, making people go against their will, or more precisely, what they believe is their will, is damn hard. The mind has very robust defenses against extraneous thought and will, and strong heuristics against extraneously-guided action, often dispelling it with potent magic spells such as “what’s in it for me?” or “fuck off with that fake-ass shit.” Trying to practice mind control like Yuri is as impossible as slamming your head against a wall of solid concrete, expecting it to give way (don’t ask how I know either one of these things). Oh sure, you can prevail upon people sometimes, nag, beg or just plain bribe them into doing things against their will, just as sometimes slamming your head against some doors will make them give way (once again, asking is forbidden), but most of the time, it’s about as useless as repeating wololo over and over again. Don’t do it outside of video games.

There are two steps to forming a narrative. The first is to implant a narrative core. This is the framework through which the world is interpreted at an early age when children develop their maps of the world.

The second step is the formation of magic words, such as racism, fascism, sexism, or diversity, which activate the narrative core when new data is incoming in order to prime the subject to assimilate the new data in accordance with the narrative core.

The third, hidden step, is the burying of such information which cannot be modified to slot into the narrative core’s receptors. This system creates a seamless form of mind control. This requires power — it requires control of the education system, control of the media, and control of the economic and security levers of power, but it works, and it works with very few exceptions. More often than not, the exceptions are due to a malfunctioning in the subject itself rather than a weakness of the programming or a resilience of the subject’s mind.

It sounds complicated and expensive and it is.

The Western liberal — even one calling himself a conservative — is used to thinking of individuals making rational choices. To him, this talk of frameworks and expression of the will is alien, as if we were describing bees or other hive creatures. When we think of mind control, we think of Yuri mind-controlling American tanks. When we think of brainwashing, we think of brutal Eastern European-accented military men using Pavlovian conditioning and torture in order to force an alien set of behavioral modes on an unwilling subject. We do not think of good, decent, law-abiding, hard-working men and women following their instincts to conform to the majority opinion, participate in the dominant religion, and protect their children from falling prey to the self-destructive whims of youth. The Western liberal, convinced that all men are rational creatures, possessed of independent will, can only conclude that endowed with reason, men can see the truth, process it, and then through learned discourse arrive at a conclusion amenable to everyone. The very idea that behavior and ideas come “from above” — and especially that bad ideas come from above, and more importantly, that the vast majority will lap these ideas up and be rewarded for it — disturbs the liberal. Even we, evil, fascist nazi racist dissidents speak contemptuously of “normies” who mindlessly obey globohomo, because, although we may have intellectually rejected the notions of liberalism, we are still part of the liberal culture and our biases are still such. Indeed, speaking with a normie on any subject which requires thought fills me with contempt and disgust, especially when the normie starts repeating the cliched catechisms he believes to be profound wisdom. Yes, yes, I’ve heard all that, and I’ve rejected it as asinine 10 years ago. And yes, dear reader, I indeed am very fun at parties.

Normies are very easily controlled, but how does one mind-control people unsatisfied by mere catechism? Well, simple, really. Develop a framework for them that’ll guide them to desired or at least neutral conclusions. Give them a parallel ethical paradigm that conveniently doesn’t challenge the system’s basic presuppositions and core tenets. Give them, in other words, a stick to chase, and in the very unlikely case that they catch it, yank it out of their mouth, throw it again, and convince them that they didn’t catch the stick hard enough. Best part? You as the regime don’t even have to actively set up such a stick-throwing operation. Rather, the Marketplace of Ideas™ will produce just such an ideology that nicely comports with everyone’s neurological and educational biases (which you, as the regime, implanted during the educational process). Then all the regime has to do is put a spotlight on such stick-chasers, maybe throw some money at them, and hey presto, you’ve invented Conservative Inc.

There are probably many cynical grifters and federal operatives within Conservative Inc. But many of the talking heads and a majority of their followers are true believers. They genuinely believe the folderol spouted by such stuffed shirts as Mark Rufo and James Lindsay. They genuinely believe that critical race theory is only problematic because it is “Marxist” and that calling it anti-white runs the danger of summoning Hitler. Styxhexenhammer genuinely believes the ANC is anti-white because they are socialists. Nobody is paying these people to say this or lead dissidents astray — they genuinely believe it, and they trigger the enemy strongly enough that they get some token pushback. Nothing quite like the deplatforming, banishment from banking and finance, and 2-month-long continuous DDoS attack that Counter-Currents has caught, though, but enough of a booboo that they can consider themselves genuine opposition.

And it all goes back to partial redpilling. The mind-controlled opposition considers itself redpilled because it has found a good enough heuristic for defending itself against the narrative’s software updates, but has not examined itself for any remaining implanted narrative cores, nor have they attempted to steel themselves against the overwhelming might of the magic words — indeed, they question the very possibility of such a thing existing, owing to their cult of reason and belief that men are naturally rational.

» Day at the Museum: A Special Guided Tour