In Defense of Dysfunction 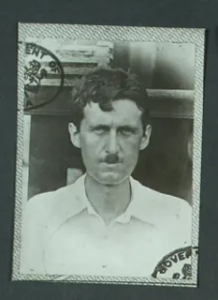 “But I don’t want to go among mad people,” Alice remarked.

Reading George Orwell’s Politics and the English Language, I can’t shake a feeling that Orwell, while right about the various ways in which language is used and abused to limit and channel thought, was a little autistic. While I will concede that sometimes certain constructions are used out of cowardice, I remain convinced that there is indeed a semantic difference between not unattractive and beautiful and that this nuance escapes an excessively forthright and logical mind. But alas, Orwell is right. And as we can tell from the autobiographical Shooting an Elephant, his dysfunction was probably what made him capable of such insight.

Orwell was a dysfunctional man by the standards of his time, place, and position in the world. As a socialist writer in mid-century Britain, he should have been the toast of his former employers at the BBC. As a Spanish Civil War veteran, you’d expect the Reds either in Moscow or old London town to have at least taken care of him a little bit. As a repentant colonial policeman, you’d expect him to be feted by anti-colonialist fantasists from Delhi to Washington. But none of that transpired. He lived out his days in poverty and relative obscurity (certainly compared to his talent and insight). It was because he didn’t get it. Reading Orwell, and especially The Road to Wigan Pier, makes you realize that he really didn’t get that British or even Russian (or more precisely, Jewish) socialism was never about the workers or the poor. It was always about middle-class intellectuals resenting the upper class and large industrialists.

Orwell didn’t get it, and so he managed to fail at being a middle-class socialist writer in mid-century Britain. Not by historical standards, no. Very few of the grey, boring men who repeated the party line no matter what it was are remembered today, certainly none as well as George Orwell. But by any metric of a good life, Orwell failed, and maybe that’s what matters more than such lofty and useless postmortem achievements such as being remembered and revered throughout the centuries. The later works of Orwell burn with frustration, some of which is probably personal.

Listening to Greg Johnson interview Jim Goad, I hear one describe himself as autistic, the other as sociopathic. They’re probably wrong in the clinical sense, but is there some truth to it? And more importantly, could a measure of neurodivergence be a necessary prerequisite for getting involved in dissident politics? It’d certainly help. An autist cannot see society’s disapproval. A sociopath simply doesn’t care. People have remarked that the Dissident Right is full of Asperger Syndrome types, and an often bemoaned feature of dissident politics is the prevalence of sociopathic types, especially in leadership positions. But we may be getting ahead of ourselves.

Let’s start with a very simple proposition. Humans come in a large variety of neurotypes. There’s intelligence, and then there’s personality, which yields hundreds of possible variations of man no matter how you slice it. Human biodiversity might be politically important to racialists due to the stark biological differences between the races, which result in behavioral and civilizational differences, but on a deeper level, human biodiversity within race is far more fascinating, especially if you agree with Professor Ricardo Duchesne that white people have the highest degree of within-race neurodiversity and biodiversity. Lots of different types out there.

These neurotypes did not come out of nowhere. They exist, and more importantly, persist throughout our history because they were adaptive on the individual and/or the group level of selection. Some could be overshoots of other neurotypes (autists vis a vis Aspergers), some may be proto-states of others. They’ve been with us for long enough that they’ve survived into modernity and if a particular neurotype has a name and a checklist, odds are it’s prevalent enough that it cannot be dismissed as a historical aberration, even though it may be in a sense aberrant.

Insofar as they’ve been with us for such a long time, the genes for these neurotypes have proven themselves sturdy and able to withstand the pressures of deep evolutionary time. So, why do we call some — hell, why do we call most — of them disorders? Why do we call them mental illnesses? If autism, schizophrenia, bipolar disorder, ADHD, and sociopathy are sources of dysfunction, why have they survived this long?

The fact of the matter is that traditional society was far better at accommodating the neurodivergent than modern society. The socially anxious and mildly autistic would gladly welcome a return to rigorous traditional behavioral codes and structured social life. Can’t end up with no girl at the dance if the dance is a strictly controlled environment which depends more on making the proper inputs rather than the freewheeling atmosphere of the modern club which does violence to the senses. Not good with people? Why not till the land or deal with animals; you like structured activities, don’t you? Got a manic episode coming up? Good timing! We need that row of trees cut down. So, you’re a sociopath with no fear of the law? Well, buddy, you ought to know that if you indulge your evil inclinations, God will send you to Hell to burn for all eternity, and don’t think you can deceive Him.

But back in dreary, grey modernity, the great tapestry of human neurodiversity is for the most part dysfunctional. In the world we’ve built for ourselves, the model citizen is one part consumer, one part button-pusher, and two parts ass-kisser — or in other words, the archetypal bugman. Too lively to sit in a chair and push buttons? Dysfunctional! Too autistic to understand that asses need to be kissed? Dysfunctional! Too much self-respect for ass-kissing? Downright dangerous! Won’t consume? Oy vey, call the men with the butterfly nets, we’ve got a certifiable madman on our hands!

Since you’re now certifiable, modernity will deploy its unofficial clergy who’ll use magical rituals and sacred ointments to make you function again. The shamans also make a killing on the ointments and on prescribing them to people because they show dangerous signs of divergence, especially children. What, little 8-year-old Timmy won’t sit still and listen to his shitlib teacher with the nails-on-a-chalkboard voice drone on about white privilege? Little Timmy wants to run around, play cops and robbers, build mud forts, climb trees, reenact historical battles, and throw rocks at shitlibs droning on about white privilege, as children have done since time immemorial? He must be crazy! Quick, pump him full of amphetamines before he does something — gasp — divergent!

Modern psychiatry and modern definitions of normal and abnormal are symptoms of civilizational decline in the Spenglerian sense. I suspect the endpoint of complete degeneration is a society consisting only of bugmen, presided over by psychiatrist-bugmen, where divergent mind states are controlled and attainable through drugs, both legal and illegal. Party drugs emulate mania. Weed emulates contemplative states attainable by yogis. Amphetamines emulate hyperfocus. Alcohol is the only one which is not an emulator, but rather an enhancer of personality — whatever you are, you become more of it under the influence of alcohol. It is also the most characteristically European drug. Other races can’t handle it, can’t indulge in it, don’t have our millennia-old love-hate relationship with it. This is why bugmen and the bourgeoisie dislike booze — it brings out their grey and boring selves to the fore.

Circling back to our own movement, is it any surprise that the Dissident Right is full of neurodivergents? After all, who is likeliest to revolt against the modern world than he for whom there is no place in the modern world? It’s certainly one of our biggest weaknesses. Mark Collett considered his Patriotic Alternative conference a success because of the absence of “that guy.” I listen to that speech and am glad for Mark and Patriotic Alternative, but can’t help feel a little put on the spot. I am in many ways “that guy,” with more dark triad traits than the average convict, with my mood swings, fondness for alcohol, and confrontational attitude. What if we’re a movement of guys like that? Even the smart ones — especially the smart ones? Not to say we can’t or shouldn’t put in an effort to behave ourselves. But it is who we are.

Assuming I am among fellow madmen, I bring good news and bad news. The good news is that modern psychiatry is wrong and you are not dysfunctional, merely built for better things and better times. Disentangle yourself from the web of modernity, and you will find your place in the world. While it may be small consolation while the state unleashes weaponized psychiatry on us, it’s good to know that we’re not really crazy. After all, we have social proof for our thing. We have each other. The bad news is that Foucault was only half-wrong when he said that power creates these categories — while it is indeed true that we’ve been made into this category of mentally ill by power, it remains true that we’re the men who for whatever reasons will not be normalized down to bugmen. That means that there’s something genuinely different about how our brains are wired, about how we’re put together. We won’t be able to bugmanize ourselves in order to fit into the modern world, not even to avoid punishment from power, or in attempts to infiltrate enemy institutions. There is a core essence to us which we cannot deny without destroying ourselves.

Part of our victory against modernity will be the expansion of the scope of functional neurotypes. The only way out is through.