A Klantastic Day in Texas 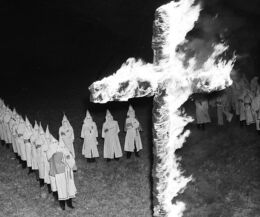 Like a shooting star in a white hood, the news crossed my Twitter feed about how evil white supremacist Republicans in Texas voted last Friday to make it impossible for teachers to say anything bad about the Ku Klux Klan.

Naturally, that’s not what happened, and if there’s to be any hope for public education and media accountability in America, a truly just and righteous nation would immediately appoint me Grand Wizard of Education and King Kleagle of All Media.

As Grand Wizard of Education, I would make the nation’s first educational priority to drill into students’ skulls the difference between objectivity and subjectivity. If, after 12 years of public schooling, students proved unable to distinguish between a fact and an opinion, they would be summarily sterilized and deported. If they were incapable of identifying all extant logical fallacies in a 500-question written and oral test—250 questions each—their teachers would be publicly lynched.

I would also make it mandatory for all high-school graduates to learn and be able to articulate the crucial differences between critical thinking and Critical Theory, terms which sound similar but are in fact diametrically opposed to one another.

As King Kleagle of All Media, I would enact an eternal policy, never to be revoked, requiring that if any member of a licensed and accredited news-gathering agency—even once—presented a feeling as a fact, they would be forced into unpaid agricultural labor until they dropped dead from heat exhaustion.

On July 16, the upper chamber of the state legislature in Texas—a state which I would like to think is great but which my experiences there have confirmed why even its proudest residents only give it one star—voted to amend HB 3979, a bill which had passed in June that provided a general educational framework for what young Texans from kindergarten through grade 12 were to be taught about American history.

The mandated curriculum leaned heavily toward a social-justice reinterpretation of history, requiring Lone Star students, whether they liked it or not, to imbibe things such as “the writings of the founding mothers and other founding persons,” “historical documents related to the civic accomplishments of marginalized populations, including documents related to: the Chicano movement, women’s suffrage and equal rights, the civil rights movement . . . and the American labor movement,” writings from MLK and Frederick Douglass, the Fugitive Slave Act and The Indian Removal Act, William Still’s Underground Railroad Records, and The Book of Negroes, which has been on my reading list for so long that I’m ashamed to admit I haven’t even cracked the darned thing open.

It also required that students be taught—OK, maybe “lectured” or even “reprimanded” are more apt terms—”The history of white supremacy, including but not limited to the institution of slavery, the eugenics movement, and the Ku Klux Klan, and the ways in which it is morally wrong.”

I have no qualms about teaching the history of any of these things, particularly if every possible angle, including that of white supremacists, slave masters, eugenicists, and Klansmen were presented.

It’s the “morally wrong” clause that sticks between my teeth like a stubborn strand of barbecued pork.

All of the aforementioned reading requirements were scrapped last Friday by an 18-4 vote that was more lopsided than it would have otherwise been because the state’s Democratic legislators threw a tantrum and fled the state to prevent any laws from being passed, I shit you not.

One thing that especially ruffled the Democrats’ bloomers was the amended bill’s requirement that when covering any historical topic, teachers should, to the best of their ability, “strive to explore that topic from diverse and contending perspectives without giving deference to any one perspective.”

In other words, teachers should be objective when teaching history and not stick their beaks into the narrative.

Falsely claiming that the amended bill would “tie the hands of our teachers,” the postmenopausal State Sen. Judith Zaffirini asked, “How could a teacher possibly discuss slavery, the Holocaust, or the mass shootings at the Walmart in El Paso or at the Sutherland Springs church in my district without giving deference to any one perspective?”

It’s quite simple, lady—present as many historical facts about these events as time permits. Discuss controversies about what is fact and what is fiction in all of these cases. If there is to be any opinion-mongering, dispassionately present the opinions of all players on all sides of these events. Stick to “This is what appears to have happened, and this is what the relevant participants claimed about what happened.”

All you need do is restrain yourself from teaching “One side good, other side evil” as historical fact.

Why the fuck is that so difficult?

Apparently, it’s the hardest thing in the world for people who view history through a moralistic lens rather than a magnifying glass.

If you just have to talk about the Klan, knock yourself out. But also discuss the climate of anti-white vengeance in the Reconstruction South that led to the Klan’s emergence in the first place.

If it turns you on to talk about slavery, talk about white slavery, indentured servitude, and convict labor as well. Teach about the white children in New England who were worked to death in factories while black slaves picked cotton in Georgia. Mention the large quotient of freed blacks who owned slaves.

If you insist, against all evidence, that slavery was the sole reason the Civil War was fought, mention that hundreds of thousands of poor and working-class white soldiers sacrificed their lives to free four million black slaves. Mention the tens of thousands of black Confederate soldiers who fought in that war.

If you must talk about Native Americans, talk about the archeological evidence that shows the alarmingly high rates of violent deaths they suffered before Europeans arrived. Don’t fail to note how many of them owned black slaves or how many tribes teamed up with white settlers to battle other tribes.

If you insist on using Critical Race Theory and the 1619 Project as “frameworks” through which to view America’s racial history, use other “frameworks” such as the statistics regarding race and IQ and the relative civilizational and technological development of these racial groups on the continents from which they came.

If you simply can’t help yourself from comparing the economic conditions and longevity under which “marginalized populations” suffer in the USA compared to whites, don’t forget to compare how they fare in America compared to their kinsfolk in their countries of origin.

Teach about how the US has dropped in international prestige and economic rankings over a timeline that almost perfectly correlates with the increasingly myopic focus on “marginalized populations” and their alleged enrichment of American culture.

In other words, teach the story, the whole story, and nothing but the story. No one is tying teachers’ hands, figuratively or literally, from adding their opinions about whom the good guys and bad guys were—but they should be forced, under penalty of death, to hammer home the crucial difference between historical facts and personal opinions.

» Asleep at the Wheel of a Bulldozer