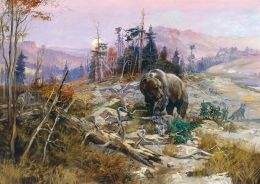 Charles Marion Russell, To the Victor Belongs the Spoils, 1901.

May have been the losing side. Still not convinced it was the wrong one.

I remember one time, in the halcyon days of 2016, being mocked by a conservative for “fetishizing losers.” He interpreted my sympathy for the Confederate States of America, the Habsburg monarchy, and old Rhodesia as a willingness to always side with the losers. Of course, my sympathy for these and other regimes of the past has nothing to do with the fact that they’ve lost. But yeah, I can see the pattern there — and the pattern of regimes that the Dissident Right sympathizes with. They’re all losers. And losers, alas, aren’t winners.

Now you could say that the CSA, Austro-Hungarian Empire, and Republic of Rhodesia have something else in common except losing, and you’d be right. Maybe that thing is what leads me and others to sympathize with and admire these historic states, but here’s the kicker — all the states who have that other thing are also states which have lost. They are, as Mr. Kimmel so eloquently put it, losers. If you’re on the Dissident Right, there’s no state or state-type entity in the world to which you can point and say: there, that’s the way I want society run. All historic states that ran on our principles are gone, most of them defeated in wars, burned to the ground, their ashes scattered to the winds. I think it’s time to face facts: we are Team Loser.

From the point of view of our enemies, this is because “the arc of history is long, but bends towards the good,” the good being them and their ideology. The CSA, the Austro-Hungarian Empire, Rhodesia, and even mean ole Donald Trump are the hated enemies of history who wouldn’t stay still and wouldn’t play dead, so they had to be beaten into submission or killed. Their opposition to History justifies their destruction and demonization. Sadly, we do not as of yet have empirical evidence to the contrary. The Whig theory of history might be proven right after all, and we’re genuinely progressing towards an End of History which the Dissident Right foolishly and futilely opposes.

Being chronic losers, one must wonder why the hell do we even try, or even pretend to hold some sort of moral high ground? There’s a reason why Might Makes Right is a popular slogan and the title of an influential book — it’s true. Whatever Might decrees to be Right is Right, or becomes Right soon enough, through a process of selection for people who agree that what Might has decreed to be Right is Right. Our enemies have been winning for so long and have been the predominant power in society for so long that their rule has become an overriding selection pressure in human evolution, to the point where the human norm considers “the good” that which our enemies value as the good. Absent systems of objective morality, both the elite and popular consensus indicate that the good is what our enemies value: egalitarianism, globalism, secularism, or in a word, globohomo.

And yet, there is opposition. Sure, the opposition comes from states and political movements that have been defeated or are currently under siege, but there’s always opposition. The Left would merely call us bigoted (which is their word for evil), but there’s something in common between the CSA, Austro-Hungarian empire, Rhodesia, and the Dissident Right aside from the loserdom. That something is the alternative moral framework, the Right which we would impose if we were to become Might. I won’t go into what it is — that subject is way too big to be tackled here. Suffice to say that the very notion that the losing side may have not been the wrong one short-circuits the Leftoid’s moral universe. How could God, or better yet, History, allow the good to be defeated? More importantly, if the bad can win, how can any man, following his instincts to fit in with the crowd, be expected to be on the side of the good? It puts to death the notion of mechanistic morality which is imminent in the functioning of the world. If good can lose, then we cannot see what is good by means of what is victorious, meaning that morality is in a category outside of the material. This may not sound very profound, but it strikes at the very heart of the Whig/Calvinist conception of the good shared by the modern Left.

But enough about the winners. Let’s look at what the losers have to say for themselves.

To start off, these three regimes, as well as all the other historic regimes and movement which have been defeated by globohomo, were not Sam Francis’ Beautiful Losers. In fact, it’s usually the beautiful losers (conservatives) pointing the finger at the historic and current dissident movements and regimes, probably because we are the ugly losers. See, they lost but they didn’t give in to the darkness. They did not challenge the Right, they were merely slapped down by Might, whereas we defied Right, which forced Might to crush us. In this sense, and within the framework of victim-centered morality, they are (beautiful) victims of unscrupulous Might, whereas we had the temerity to challenge Right. They were passive, unassuming, and meek, cruelly crushed by the Left, sacrificing themselves on the altar of principle. We were aggressive, rowdy, and proactive, bringing our defeat upon ourselves. Theirs is a Greek tragedy of great men undone by their greatness, ours is a Shakespearian history, and we’re the hunchbacked child-killers who dared transgress against the Principles in the Tower. And so, they call us losers.

You’d think that someone on the Right would try to get out of the loser paradigm, trying by hook or by crook to win. And we did. We had the Alt-Lite and MAGA, which followed in the golden wake of Donald Trump, the archetypal winner, who won bigly and based his entire public presence on winning. These guys were always winning, always growing, they had huge social media presences, and were mocking us as irrelevant losers who had low numbers of social media followers.

And then they lost. And because their entire identity was wrapped up in winning, they disintegrated. Many receded into the background, and some are now trying to reinvent themselves as genuine dissidents, hoping that our memories are short enough that we forget how giddily they called us losers while we cautioned them to curb their enthusiasm about winning. But hey, loserdom is not a hat you can put on and off. It’s not a good look on them. We can pull it off because we’ve been losing for so long without being fully destroyed that we have a sort of a cockroach’s mystique about us. Our pompous and flashy friends of the alt-lite have proven themselves fragile and easily demoralized.

So, that leaves us. The ugly, perpetual losers of the Dissident Right. What’s our story? We’ve always been around, standing up for the alternative moral frameworks, for our people, for our history, for family, for hierarchy, for community. We’ve historically had states. I mentioned a few of them. They’ve all been defeated. The winners of history use some of those states and their leaders as monsters to scare each other into action against us. Where does it end for us? Does History finally end when the last dissident is defeated, or do we outlast our triumphant enemies and their gelded compatriots?

Small-h history isn’t so kind to us. Then again, small-h history isn’t all that kind to the winners either. They grow fat and bloated and are carved up by barbarians. Small-h history devours all, it is not merciful, it is not principled, and it’s still going on. Its rules are more opaque, it doesn’t use terms such as good and evil. It doesn’t even recognize losers and winners. It is the all-encompassing ocean in which we fishes, great and small, swim. It is also a thing of rapid and violent changes, where the unexpected happens with an uncharacteristic regularity.

To see the great sprawl of historic defeats which the Dissident Right has faced is demoralizing. But we had those good times while they lasted, and only a fool can claim that a history of defeat means certainty of future defeat. Obviously, we should not employ the old tactics that failed, but the future might be brighter than it looks. We live in a time of great upheaval and change, the kind of which can turn all sorts of historical tides, even for the great losers of history.