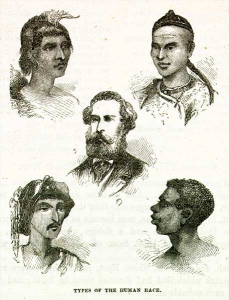 Imagine if I screamed my lungs bloody all day and all night, for years on end, about the Devil and how he’s the greatest threat to humanity. And then, let’s say a well-tempered Satanist tried to counter my caterwauling by saying, “Relax, fella — the Devil’s not that bad.”

If I replied, “The Devil doesn’t exist, you retard,” would I sound crazy?

What kind of brain is capable of simultaneously holding two such utterly contradictory ideas without exploding?

Apropos of all this, I recently answered some questions from a writer friend, including this one:

I answered that both were important, adding that the problem with modern America is that tribal acceptance is not applied equally:

What’s being proposed now is tribalism for everyone except whites, which is a recipe for disaster rather than harmony. Either everyone should be permitted to bask in their tribal identity, or the very idea of basking in tribal identity should be stigmatized for all groups the way it currently is for whites. I’d be fine with either option, but the egregious double standard is the main reason we’re in this current mess.

Someone emailed this to my interrogator:

“Can somebody explain to Jim that whiteness isn’t a thing so there’s no need to be tribal about it?”

Can someone explain to this moron that if what he’s saying is true, everyone in academia and the media needs to shut the fuck up about whiteness? . . . Ask him if he thinks “blackness” is a thing.

There was no response, but I’d bet my house, truck, and shiny leather boots that the guy who said “whiteness isn’t a thing” would insist that not only is “blackness” a thing, it’s the greatest and holiest thing that has ever existed on this planet.

These are the same sort of cretinous zombies who think that “race” doesn’t exist, but somehow “racism” is ubiquitous.

The same people who say the “great replacement” is a dangerous conspiracy theory also gleefully cite stats about exactly when whites will become a minority.

The same dopes who say white people don’t exist are the first to leap on a news story featuring a white gunman and a nonwhite victim.

They’re the first to celebrate when a white person loses a job to a lesser qualified humanoid of color.

These same people allege that blackness is an unassailable monolith but also state that modern Africa is home to more genetic diversity among Homo sapiens than anywhere else on the planet.

Even though white people don’t exist to them, they’ll insist that Hollywood, academia, the media, and everything else, including vanilla ice-cream cones, are “too white.”

It’s some place so far beyond reason that one wonders whether anyone who believes this nonsense should even be allowed to use a toilet unsupervised.

They’ve managed to get everything spectacularly backwards in their brain-dead quest to assuage their insecurities by engaging in an eternal moral panic that they hope will finally result in them feeling absolutely fantastic about themselves.

I once engaged in a livestreamed debate with race-denying senile dipshit E. Michael Jones, who has attempted to argue that America’s main three ethnic groups are Catholics, Jews, and Protestants. Yes — he’s really THAT deluded.

Besides both of us being white males, the only thing that Jones and I have in common is that we’re both from Philly, and during that debate he mentioned an Irish-Catholic friend of his who got murdered in North Philly — a sprawling war zone that is almost entirely black — and I told him that I’m certain his friend wasn’t killed for being Irish or Catholic.

What Jones — who’s considered to be so hard-Right that he might as well be made of granite — shares with far-Leftists is that he’ll deny that “whiteness” exists but will allow that “Polishness” and “Irishness” are valid identities. But I never hear this breed of schmuck say that “blackness” doesn’t exist, only “Nigerianness” and “Zimbabweness.”

In dealing with such types, it’s better to use the term “continental ancestry” instead of race, because you can do a simple DNA test on a skull to determine continental ancestry. But you couldn’t determine whether that skull ever harbored “racist” thoughts. Race can actually be quantified; “racism” can’t. Again, they have it upside-down — the only “social construct” in this equation is “racism.”

Stammering to defend their screaming illogic and somehow disprove the biological existence of white people, they’ll correctly note that in some classification systems — especially the myopic one that only sees white, black, and yellow — both Castizos and Arabs are considered white.

But that’s simply an error of classification. Using my far superior method of classifying racial groups by continental ancestry, Castizos are European-Amerindian mutts, whereas Arabs are western Asians.

Just as fish probably aren’t conscious of water because it’s all they’ve ever known, the only time in history where “whiteness” likely had no meaning was in ancient Europe, because the only people spanning the continent were white.

It’s a matter of proximity. The term “human race” would only have real meaning if Martians were to invade.

But on a global scale in the modern world, it’s hard not to think that anyone who says white people don’t exist is either a hopeless nincompoop or a disingenuous liar.

Regarding the disingenuous liars, what are these tools thinking?

The problem is that they’re not thinking at all. They can sniff power, and they’re genuflecting before it.

To them, whiteness exists as a target. Of course white people exist — but perhaps not if the people who keep insisting, against all evidence, that white people don’t exist ultimately have their way.

Maybe they know that white people exist, aren’t happy about it, and are seeking to eliminate them. Maybe that’s what is truly meant when they say there’s no such thing as white people.

Maybe it’s a deferred dream that they hope will one day be a reality.