America’s Morass in the Middle East 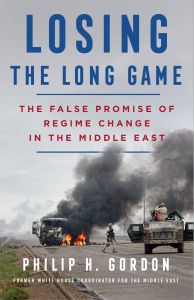 In Losing the Long Game, Gordon argues that American regime change efforts in the Middle East all have different motivations and methods, but still end in disaster. He begins his narrative in 1953, with the coup to oust Iran’s Prime Minister Mohammad Mosaddegh.

Mosaddegh wished to nationalize the Anglo-Iranian Oil Company (AIOC), not unjustly. The British blew the opportunity to adjust the AIOC’s organization to match the more equitable relationship between American oil companies and the Saudi Arabian government. Instead, they went for what became an all-or-nothing gamble. Prime Minister Churchill sent his diplomats to persuade the newly installed Eisenhower administration to participate in a coup to remove Mosaddegh.

Although Mosaddegh was only an “Iran First” nationalist, the British persuaded the Americans that Mosaddegh was a Communist. The coup was organized by Kermit Roosevelt and carried out by the Central Intelligence Agency. Roosevelt’s plan consisted of

bribing journalists, editors, Islamic preachers, and opinion leaders to undermine the government and fan the flames of distrust. Stories would be planted “to show Mosaddeq as a Communist collaborator and as a fanatic,” and thugs would be hired to organize protests and create chaos and instability on the streets. (p. 33)

After some setbacks, the plan eventually worked. The Shah of Iran, Mohammad Reza Pahlavi, ended up the undisputed leader of the nation. He held power with the aid of an FBI-like organization called SAVAK. Meanwhile, the economic and other problems which Mosaddegh sought to correct remained. Dissent flourished in the mosques of Iran and Iranian religious leaders took up the torch of Iranian patriotism. In 1979, the Shah was overthrown, and Iran became an implacable enemy of the United States and Britain and succeeded in imposing many humiliations upon both nations.

In December 1979, the Carter, Reagan, and Bush administrations sent aid to support Islamic Mujahideen fighters that were attempting to oust Soviet troops stationed in Afghanistan. The Soviet-Afghan War eventually destabilized the Soviet Union enough that it fell apart within a few years of the Red Army’s 1989 departure from the region.

The Americans who supported arming the anti-Soviet Afghan fighters were white, often Right-wing, and usually Catholic — heirs of the American pro-Franco faction that emerged during the Spanish Civil War. While the destruction of the Soviet Union and most of the Communist world was an enormous victory, the other long-time enemy of Spain and Western civilization, Islam, emerged from the conflict empowered.

Part of the problem came down to a misinterpretation of the word mujahideen. The anti-Soviets in the US government at the time called Afghan mujahideen “freedom fighters,” but the mujahideen weren’t fighting for “freedom” in a 1776 sense — mujahideen means “one who wages jihad.”

American support for Afghanistan also shored up the Pakistani position in the region. Pakistan became the indispensable ally and they were showered with high-end American weaponry and financial aid. They used that support to shape Afghanistan to suit their own needs. Furthermore, Muslims from the Arab world who believed in the radical interpretation of Islam provided by Sayyid Qutb became a highly organized and lethal force during the conflict. Osama bin Laden created an incredible terror network from his base in Afghanistan.

When the United States and NATO invaded Afghanistan in response to 9/11, the Taliban government was overthrown, but the problems related to overthrowing a Middle Eastern government remained. America has been unable to create a functioning state in Afghanistan despite the enormous resources and lives poured into the region.

The American public is utterly tired of the conflict in Afghanistan, and yet a troop withdrawal seems impossible to come by.

The roots of the Iraq War that started in 2003 began with the end of the 1991 Persian Gulf War. During the latter conflict, the American government chose (wisely) to not press on to Baghdad after liberating Kuwait. The Americans then chose (unwisely) to not seek any rapprochement with Iraq. Military operations continued in the “no-fly zone” from the end of the Persian Gulf War until the Iraq War.

Meanwhile, a large number of US policymakers changed their view of Iraq, believing that it was a major menace developing “weapons of mass destruction” under its strongman leader. Gordon does a good job laying out who the players were during this time as well as their logic.

Problems in Iraq began immediately after the American invasion. Eventually, a budding sectarian war was suppressed by a major American troop surge.

President Obama, whose political star rose when he gave a cautionary speech about the conflict in 2002, was able to remove many troops from Iraq and declare victory. Then came ISIS:

Eleven years after the initial U.S. invasion, Iraq not only was not a free, stable, and functioning democracy but was being attacked from within by an extremist movement that was even more violent, repressive, and hostile to the United States than Saddam. (p. 138)

The Obama administration’s first chance for Middle Eastern regime change came in Egypt in early 2011. Obama’s staffers turned out to be deeply divided about what to do about the large protests going on in Cairo. The older staffers argued for caution. The younger staffers thought that they were on the cusp of revolutionary change in the Arab world and it would be best to side with the protestors.

Naturally, it all went bad. The Muslim Brotherhood took over in Egypt and the Egyptian military returned to power.

Gordon describes Obama’s dubious operation in Libya in one chapter. To explain simply, it was a disappointment. Gordon also provides a good account of the debates about American involvement in Syria. More axiomatically:

It is . . . hard to avoid the conclusion that if the United States was not prepared to accept the real costs and consequences of regime change — which are always greater than its proponents acknowledge — it would have been better to not pursue the goal in the first place. (p. 206)

Gordon reduces some major problems of Middle Eastern regime change to the following:

There was a time when Middle Easterners didn’t hate Americans. The State Department was once filled with “Arabists.” Gordon doesn’t mention this, but I will. The “Arabists” in the State Department were Yankees from good families who grew up in the Middle East because their parents were Christian missionaries there. All those “Arabists” were removed by Jews in the US government after the establishment of Israel.

The Jewish Question is thus an important part of why the Americans meddle in the Middle East despite its highly predictable consequences. Gordon masks the “JQ” when he describes the debates over the 2011 Arab Spring between “older” and “younger” staffers in the Obama administration. A quick look at the “younger” staffers reveals that many, like Anthony Blinken and Elliot Abrams, were Jews. Others, like Samantha Power, are married to Jews. Likewise, many of the neoconservatives that argued for the 2003 Iraq War were Jews.

From the perspective of Israel First, it is clear that Israel’s security has increased due to the American-caused disorders in the Middle East. Arab Nationalist regimes have proven to be effective in providing for their people and countering Israeli aggression. Replacing such regimes with Jihadist insanity is in the interests of Zionists.

Therefore it is right to be suspicious of Jewish advisors in the US government. Israel is protected and the Americans pay for it with their own blood. The question of who lost Syria is the most important foreign policy question today.

Obama partially blamed the disaster in Egypt on “information bubbles” caused by the internet. He argued that liberals searching for information on Egypt would get a report on Tahrir Square, apolitical people would get results about vacation plans, and conservatives would read articles about the Muslim Brotherhood. After reading this book, it is clear that “information bubbles” weren’t the issue at all. The Muslim Brotherhood did take over and the Obama administration’s plan to oust then-President Mubarak was unwise from the beginning.

Gordon’s description of the 1953 coup in Iran matches the Establishment’s action in the 2020 US presidential election to a horrifying degree. In both cases, there was one-sided anti-Mosaddegh/anti-Trump press coverage, riots in the streets, bribing of officials, etc. In both cases, a reasonable reformer was imagined to be something he was not. In both cases, the person deposed was responding to real issues. In both cases, the same sorts of people were pushing for regime change.

Like Iran in 1953, America could be on the path toward revolutionary change. Those who sow the wind reap the whirlwind.

« Go in Fear of Abstractions