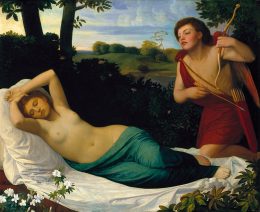 Valentine’s Day has always been a fun holiday for me. If I had a girlfriend at the time, Valentine’s Day gave us an excuse to go out to dinner and exchange gifts. If I did not have a girlfriend or could not find a date, I would use the holiday as an excuse to play video games all night. Even when I got stood up on a Valentine’s Day date, I ended up discovering the Metamorphoses (also known as The Golden Ass) by Apuleius. This classic novel has given me a lot of insight into human nature and how to balance short-term desires with long-term happiness.

Like all great legends, the stories surrounding Valentine’s Day mix fact and fiction together to create a mythos that is timeless and relatable. During the reign of Roman Emperor Claudius II (268-270), a Christian priest named Valentine conducted marriage ceremonies for Christians in secret. Valentine would wear a ring with the emblem of Cupid so people could identify him. Because of his unwavering faith, Valentine was eventually arrested and imprisoned. While in prison, he fell in love with the jailer’s daughter and cured her of her blindness. Before being executed, he wrote a letter to the jailer’s daughter and signed it as “your Valentine.”

This story has been passed down and embellished throughout the ages. Valentine was canonized and added to the calendar of saints by Pope Gelasius in 496. In the 8th century, Valentine’s miracle of curing the blind woman was briefly described in Bede’s Martyrology. By the 13th century, this tale was retold by Jacobus De Varagine in the Golden Legend. Due to the popularity of these stories, February 14 became associated with Saint Valentine. Valentine’s Day poetry and letters also became popular in England during the next three centuries. These traditions made their way to the US and have become entrenched in modern American culture and society. Thanks to a religious dissident in the Roman Empire, modern couples can celebrate their relationship each year by giving their partner cards, candies, and flowers on February 14.

Despite the inherent commercialization of the holiday, I have a lot of fond memories of Valentine’s Day. Throughout the years, I have always enjoyed taking a girlfriend out to dinner. If I did not have a woman in my life, I often set a goal for myself to try to find a date for Valentine’s Day. During my sophomore year in college, I built up the courage to ask the woman at the smoothie shop out on a date for Valentine’s Day. After talking on the phone, we planned on having dinner at a nearby Italian restaurant. One hour before we were set to meet each other for dinner on Valentine’s Day, she called me to say that she had to cancel the date. After feeling let down, I decided to read some books in the college library to take my mind off things. Due to the interesting title and cover, I started reading the Metamorphoses by Apuleius.

Apuleius was a 2nd-century Latin writer who experienced many adventures while traveling around the Mediterranean Sea. After falling in love and marrying a rich widow, Apuleius was accused of using magic to seduce his wife. After defending himself against these charges in court, he was cleared of the charges. This incident may have inspired Apuleius to write the Metamorphoses. The Metamorphoses follows the adventures of Lucius after a magic spell turns him into a donkey (hence why the novel is known under the popular title of The Golden Ass). The novel also combines several short stories that revolve around betrayal, lust, and revenge. From star-crossed lovers to bitter spouses, one story took my mind off Valentine’s Day with both shock and humor.

Lucius is told a story about a woman in the village who is having an affair with her neighbor. When her husband returns home early one day, the woman hides her neighbor in the bathtub. Her husband informs her that he came home early because he was able to sell their bathtub for six gold coins. In fear of being caught, the woman tells her husband that she has just sold the bathtub for seven gold coins to the neighbor and that he is expecting the tub now. Hearing the conversation, the neighbor plays along and explains that he will not buy the bathtub until the husband cleans the tub. The husband eventually cleans the bathtub and delivers it to the neighbor’s house as the wife and the neighbor return to their previous actions. I felt bad for the husband and a little guilty for enjoying this tale, but it made me laugh until my eyes watered and my stomach hurt. From that point on, I made a vow that my future house would only have a shower.

Although the Metamorphoses has a few raunchy stories, one of the most memorable stories is the tale of Cupid and Psyche. Psyche is the most beautiful woman in the world, but is resented by Venus. Venus sends Cupid to destroy Psyche, but Cupid ends up falling in love with Psyche. Cupid then decides to rescue Psyche and they both escape to his castle. Despite a curse banning Psyche from seeing his face, they spend each night together. After seeing his face, Psyche accidentally burns Cupid with a lamp. Due to this misunderstanding, Cupid abandons Psyche. To get Cupid back, Venus sends Psyche on a quest to complete four impossible tasks. After going to the underworld and back to prove her devotion to Cupid, Psyche obtains immortality so both Cupid and Psyche can stay together forever.

The tale of Cupid and Psyche is like the main storyline of Lucius as he searches for a way to become human again. Whereas Psyche must endure the tasks of Venus before being united with Cupid, Lucius must perform the rites and rituals of the priesthood of Isis to transform back into human form. While there are many ways to interpret these motifs, both tales appear as allegories for overcoming short-term desires for long-term relationships and happiness. Even the names of the characters share these themes, as Psyche means “soul” in Greek and Cupido is Latin for “Desire.” As with many things in life, the trick is finding a proper balance between desire and happiness.

Like any other man, I also desire physical intimacy with a woman. I also would like to have a girlfriend that likes heavy metal. But after having those things for many years (often with the wrong women), I realize that those things did not always make me happy. Only I can make myself happy. Pursuing my goals and hobbies are the things that give my life meaning, purpose, and overall happiness. When I have put myself and my goals first in the past, I eventually met women that I had more in common with than any of the random women I met on dating apps. For those men that do not have a girlfriend or wife this Valentine’s Day, take the time to do the things you love and love the things you do. When you decide to pursue a woman, make sure that she is like Psyche and not the bathtub wife.

I have a lot of sympathy and concern for white men trying to find potential girlfriends or wives in our current society. With divorce rates and the #MeToo movement, many men have had their finances, careers, and lives ruined by women. Along with the increasing polarity and divisiveness between the sexes, I completely understand why some men are choosing not to pursue women and relationships at this point in their lives. With family-owned restaurants closing and banks threatening to cancel the accounts of political dissidents, many of us might not be able to take a woman out on a date for Valentine’s Day in the future.

Nevertheless, when I think about Psyche and Cupid, I am reminded of the couples I have met in the Dissident Right. Over the last few years, I have gotten to know many couples who have gotten married and have started having kids. Like everyone else, they are the first to admit that no one is perfect and that relationships take a lot of work. Thankfully, these couples show that the differences between men and women allow us to come together to build families, communities, and networks of support. This Valentine’s Day, I hope they take the time to appreciate each other and hopefully expand their families and communities.

A long time ago, a dissident was jailed and persecuted for his beliefs. Over the centuries, numerous authors and poets kept his memory alive through tales of tragedy, humor, and inspiration. These tales helped create the holiday we know today as Valentine’s Day. While I am spending the holiday alone this year, I look forward to taking a woman out on a date for Valentine’s Day next year. And as much fun as I had on this holiday with ex-girlfriends, I will always appreciate the woman that canceled our date on Valentine’s Day. Thanks to her, I will always have a story to tell of the night I spent with the most beautiful woman in the world, the bathtub wife, and The Golden Ass.

« They Admit “Our Democracy” Is Rigged