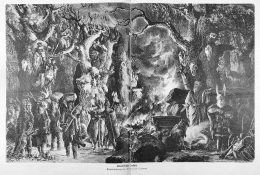 Christmas is my favorite time of the year. From Christmas decorations to Christmas songs, I always get into the holiday spirit wherever my travels and adventures take me. Although I prefer spending Christmas with friends and family, I have spent a few holidays by myself in various countries. While I was never one to question the true meaning of Christmas, I found myself contemplating the issue while spending Christmas alone in Japan. Even though I got everything I wanted, I lost the one thing that mattered most to me.

Video games and heavy metal music are a big part of my annual Christmas tradition. I always asked my parents for roleplaying video games as a kid. Thanks to them, I always found the latest Final Fantasy and Dragon Quest games underneath the Christmas tree. After opening presents, we would visit our relatives and have Christmas dinner with them. It was after one fateful Christmas dinner that I went into my cousin’s room and discovered Iron Maiden’s Somewhere in Time album. After being intrigued by the album cover, I put the album on and the first song to play was “Alexander the Great.” From that moment, I became a metalhead and a history fan. After listening to the song several times, I told my mom that I wanted to visit the ancient land of Macedonia for Christmas.

Although Alexander may not have celebrated Christmas, the Germanic tribes throughout Europe celebrated winter festivities before and during the spread of Christianity. These festivities took part around Midwinter and celebrated certain gods and events like Odin and the Wild Hunt. Such festivals included the burning of logs to keep warm, singing to keep the evil spirits away, and the decoration of trees with ornaments for good luck. Over time, these celebrations became known as Yule and Yuletide. Regardless of the original meaning, these celebrations allowed people to come together and enjoy warm fires, good food, fun music, and colorful decorations.

As Christianity spread throughout Europe, many of the Yule and Midwinter traditions were incorporated into Christmas and Christianity. In the Heimskringla, Snorri Sturluson explains that King Haakon I of Norway changed the date of the Yule celebrations in the 10th century to take place on the same day as Christmas. The last Europeans to adopt Christianity were the Lithuanian tribes in the Baltics in the 14th century. Even the Baltic pagans were known to celebrate the Winter Solstice near the end of December. While the focus and names behind the festivities changed, the European people still maintained their traditions of celebrating food, music, and activities together during winter.

Thanks to my parents, I always had an amazing Christmas as a kid with food, video games, and heavy metal. When I was old enough to have a part-time job during high school, I worked every holiday season at a video game store at the mall. I enjoyed this job as I got to help parents pick out the best video games for their kids for Christmas. I even enjoyed the long commute as I got to listen to all my favorite heavy metal albums in the car. Yet one billboard on my holiday commute always caught my attention. Every holiday season, a billboard was put up near the mall that read “Jesus is the reason for the season.”

My parents were from different Christian denominations, so I was baptized in two different churches. To be honest, I was never a devout Christian. Ever since I was a kid, heavy metal was my religion. Like most rebellious teenagers, I felt that Christianity imposed a slave morality upon its believers. Furthermore, Christianity did not resonate with me the way Norse mythology did. To make matters worse, religion became a source of contention between me and my father during my teenage years. While I did not hate Jesus or Christianity, I hated going to church. I would have much rather stayed at home playing my guitar or learning Old Norse. So when I saw the Christian-themed billboard every holiday season, it made me think about the real meaning of Christmas.

It was only in the last few years that I discovered the massive role that Jews have had in the secularization of Christmas. It broke my heart to learn that some of the most famous Christmas songs, cartoons, and movies were created by Jewish individuals who had an immense hatred for white people. Throughout my life, I have always preferred the songs and stories about Santa, Rudolph, and Frosty the Snowman over Jesus, angels, and God. While I never wanted to have Jesus or the Christian aspect of Christmas removed, I often wondered whether Christmas was better off without the religious aspect. Unlike Ebenezer Scrooge, it did not take three ghosts to show me the error of my ways. All it took was a contract job that made me spend Christmas in Japan.

Several years ago, I found a contract job in Sapporo lasting for a few months. My ex-girlfriend offered to watch my dog while I was away, and she sent me daily pictures of my dog so I would not miss her as much. My work was in the city center near the Christmas market and the park that held the annual ice sculpture festival. The theme of that year’s festival was the Final Fantasy video game series. Each evening after work I would have dinner at one of the downtown ramen shops and walk past the ice sculptures of my favorite RPG characters. Since there are very few Christians in Japan, Christmas there seemed more like a secular festival than a religious holiday. In some ways, it was exactly how I wanted Christmas to be like as a teenager.

Although I was by myself, Christmas day in Japan started great. I had chicken katsu and green tea for breakfast as I listened to “Mion’s Hill” by Sabbat. I then spent the next several hours playing the remake of Dragon Quest VII. After calling my mom and wishing her a merry Christmas, I walked to my favorite ramen shop and had miso ramen soup for dinner and green tea ice cream for dessert. After dinner, I went home and watched several episodes of Legend of Galactic Heroes. As I waited to receive a Christmas photo of my dog, I drank sake and listened to two live albums that were recorded in Japan: Judas Priest’s Unleashed in the East and Dokken’s Beast from the East. Near the end of the night, I decided to call my ex-girlfriend to see if everything was okay with my dog.

My ex-girlfriend answered the phone and explained to me that my dog had died the day before in her sleep. My heart sunk and my eyes started tearing up. I had rescued my dog from an animal shelter only five years before my time in Japan. Although she had heartworm and was very skinny, I nursed her back to health and took her with me as I moved around the US. For most of those years, my dog was my only friend. I spent the next several weeks in Japan regretting the fact that I was not with my dog during her final moments.

There is an old saying that warns us to be careful what we wish for because we just might get it. As a teenager, I always wanted to leave the US and enjoy Christmas without hearing about Jesus or Christianity. I got to experience both these things during my Christmas in Japan. I watched my favorite anime series, I listened to some of my favorite albums, and I even got to play one of my favorite RPGs, all while being out of the US. But I missed being with my dog during the last moments of her life. All the traveling, video games, and heavy metal albums could not replace the feeling of rescuing my dog and nursing her back to health. None of those things could replace the joy I felt from taking my dog for a walk or playing fetch with her every day.

While I have always respected Japanese culture, it is not a European culture. Spending Christmas in Japan without other white people felt somewhat shallow and empty for me. I appreciated my time in Japan, but I wish I had stayed in the US and spent more time with my dog before she died. In getting what I wanted, I missed what mattered most to me. Of all the places I have spent Christmas, the best Christmas experiences have been at the places where I got to spend time with family, friends, and my dog.

The true meaning and spirit of Christmas are going to be different for each person. Whether the traditions of Christmas arose before or after Christianity, our ancestors always came together during the cold winter months for the warmth that comes from food, music, and community. For me, the meaning and spirit of Christmas are best described by the feelings you get when you spend time with the people that matter most to you. If you find yourself alone this holiday season, consider adopting a dog from a shelter. It was one of the most rewarding experiences of my life. And whether you are Christian, pagan, or agnostic, remember that we all want to secure the existence of our people and a future for white children. That is a wish that all of us can gather around the Christmas tree and support.

I relocated to Eastern Europe after the contract job in Japan ended. Since then, I have made numerous friends in our community from around the world. This Christmas, I will wake up early in the morning to contact each of them and wish them a merry Christmas. It may not be a role-playing video game under the Christmas tree, but it is a great way to get into the holiday spirit while staying in touch with the people that matter most to me. In the evening, I will sip a dram of whisky while listening to some heavy metal covers of my favorite Christmas songs. If I could make one Christmas wish, it would be to spend my next Christmas with a rescue dog in the ancient land of Macedonia.

As a wanderer and a dissident, I hope that all your Christmas wishes and dreams come true.