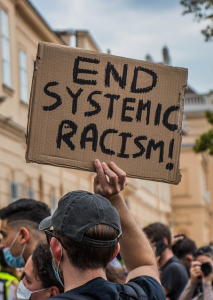 Oh, cruel irony of fate! I attended a Black Lives Matter demonstration just as the nation started to move into the holiday slumber. How did I get to such a point, you ask? I was visiting with family and one of the young ladies in my extended brood — driver’s permit age — had planned a demonstration near the town’s main thoroughfare.

The young lady’s mom and other relations deftly stepped away from any involvement in the affair, and so I became the “adult in the car” — or whatever that the title is for the grownup that drives with the permit-wielding kid that knows just enough to be a danger to herself and others. I told the kid that I didn’t believe the Black Lives Matter cause for the following reasons:

None of this came out very well, though. It’s tough to philosophize eloquently when a young teen is driving. Was I really such a choppy driver at that age? Probably.

When we got to the location of the demonstration, I said I wouldn’t leave but would stay in the car since I didn’t support the cause. Some of the organizer’s friends showed up. There were just under a dozen demonstrators. From what I could gather of the group, they were all high school friends and mostly in the same clique. Most were girls — attractive ones at that. There was one young white man there. He wasn’t a jock or the type of guy that one would be picked first for a sandlot game of baseball, but he did look like the type of fellow you want in your calculus team. Not a loud, talkative leader, but a good person to have around should you have a heart attack while on business travel in a strange city.

The group was almost entirely white, Nordic even. There was one token black and her dad. He looked like a solid fellow. If all Sub-Saharans were like that instead of say, Ahmaud Arbery, the thief “jogger” that got shot in Georgia and was promptly dropped as a martyr by the mainstream media when videos of his many prior interactions with the police surfaced, there’d be a great deal fewer problems.

Two of the group were mattoids. One was a fat kid, probably 100 pounds overweight. He was a boy pretending to be a girl, and he had a mish-mashed version of the pride i.e. rainbow flag mixed with brown and black stripes and the “trans” flag. He was wearing a sweatshirt with marijuana leaves boldly printed on it, as well as pink yoga pants. It was a bold fashion choice. The other mattoid had blue hair. I discovered later that she and the group’s organizer didn’t get along. The two stood far away from each other throughout. I discovered later that the blue-haired mattoid was a downer the entire demonstration.

Though I stood outside the demonstration, I watched matters carefully. I was in the unique position of being a Right-wing writer seeing things from the perspective of my ideological enemies. The reaction of the public to this clique of high school virtue-signalers was mostly positive. White women would smile and wave as well as all blacks. White men either drove by with no response or they gave the group the social finger. Some people would take both hands off the steering wheel and give the thumbs down signal (I thought this was idiotic). Teenaged white boys were generally hostile. One group, a boy and girl couple, was highly hostile; they drove round and round to shout insults at the demonstrators.

Finally, two cars of hostile anti-BLMers took a right and drove into the vast parking lot where the demonstrators had parked. They turned around after a few minutes and left. This caused the group to disband. They were afraid that their cars had been sabotaged or vandalized, although I’m uncertain of how anti-BLM protestors would know which cars were the right cars to vandalize. The protest broke up, just a few minutes shy of their scheduled end. The “trans” mattoid was the most fearful of the group.

I asked two of the girls later what their motivation was for holding the demonstration. They both had read a tightly-argued essay that used statistics to show that blacks were being murdered in the streets by cops. They didn’t recognize that the argument was made in a vacuum. I suppose to these young ladies, Sub-Saharans are something like cute, doe-eyed whales that are being harpooned by nasty North Koreans or something.

What to do about whites that support BLM?

The 1994 Crime Bill has done its job. When I was in high school, it was universally understood how dangerous Africans were. You could hear gunfire all the time in every big city as Congoid crack dealers shot each other on the street corners. I even remember one young dindu buck at my school who had gold chains and a beeper. Then, one day, he had no gold chains and a worried look. Another day, he disappeared and nobody cared to look for him. It was that bad.

Now, with crime greatly reduced from the high of the late 1980s, upper-class white women gain status and virtue and appreciative looks by holding up a Black Lives Matter sign.

It was interesting to see how “my side” looks in this low-level civil war we are in from the other team’s trenches. The whites that were hostile to the demonstrators all looked well put-together and intelligent. They were not mattoids. The boys looked tough. As the demonstration progressed, I got increasingly worried someone would do something stupid. I was glad when the demonstrators decided to end the affair on their own. It is easier to get people to go along with your plans if they come to your viewpoint themselves.

The hostility shown by the anti-BLM protesters was off-putting. When I was an army officer, teenaged white American privates followed my orders and I didn’t see them as a danger, but when looking at them from the perspective of an older man who is semi-supervising a teenaged girl, I suddenly understood the fear that the Iraqis must have felt seeing armed young white Americans with their hackles raised.

This fear is what is motivating the Left. Is there any way we can get white advocacy with a smile? Can a sunny optimist like Ronald Reagan get Sub-Saharans to joyfully re-locate to Wakanda? Can any Rightist gently tell the misfit fat kid to go on the South Beach Diet and drop pretending to be a girl?

Other than the mattoids, the whites in the group only have a thin level of support for BLM. I told the kid I was with that she’ll change her mind regarding Africans and non-whites shortly after becoming an adult in her own right. There is no teacher quite like solid experience and there is no way to not gain awareness of Sub-Saharan problems unless one is far-far away from them.

If I could raise a magic wand and cast a spell to damage the Black Lives Matter movement, it would be to divide Sub-Saharans from whites over wonkish matters. There are some aspects of police reform that should be taken up. Rubber bullets are cruel. Police techniques that were developed in Israel need to get a review. There is no agency crueler than the Israeli police and military. There is a solid case to be made against no-knock warrants. Genuine police reform requires knowing an issue and seeing all sides. This requires work. Sensitive whites trying to make the world more just should focus on that.

Next, if one is holding a demonstration discussing an issue where passions are high, the group’s cars need to be secured through some means. A person with a cell phone to call the police watching over the cars is a good idea. If hostile anti-protestors show up, it is a good idea to inform the police so matters don’t escalate (this might not work, though, since the police can be told to let matters escalate). Then, have everyone on message. Only one fight at a time — not BLM, plus sexual deviance, plus whale conservation, or whatever.

« Some Thoughts on Yule