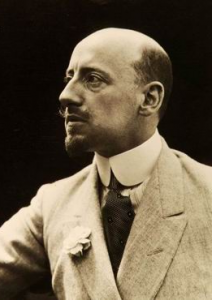 Reviewing a story collection in 1925, an American critic compared Gabriele d’Annunzio’s influence on the Italian mindset to that of Rudyard Kipling in England. “[T]o understand him is to understand pre-war and immediately post-war Italy.” [1] That sort of remark is almost inaccessible to us today; when we think of the Great War, if we think of the Great War at all, we surely don’t automatically think of Kipling or d’Annunzio. That is one hurdle in approaching d’Annunzio today.

Another is the peculiarity of his style, replete with obsessively detailed sex, gore, and flights of fantasy. That 1925 American reviewer took special exception to one of the stories at hand, “The Death of the Duke of Ofena,” in which in a few brief pages a half-dozen people are successively impaled, hanged, dismembered, and burned alive. [2]

Here and there you read that d’Annunzio’s fiction and poetry never gained much acclaim outside Italy, because his idiom and imagery defy faithful translation. And in the writer’s own time there was also the problem of censorship. Even in France, his works were often bowdlerized or never published at all. The Holy See put most of his works on its Index Librorum Prohibitorum in 1911, and they remained there (I presume) until the Index ceased in 1966.

At root, d’Annunzio seems to have regarded himself as a Man of the Renaissance, rather than simply a “Renaissance man”: someone from the age of Benvenuto Cellini, a soldier-poet-dandy, full of sensuality and operatic emotions. Someone who understood that overwhelming passion is the fuel that makes the creative soul run. A “bold, bald-headed, perhaps a little insane but thoroughly sincere, divinely brave swashbuckler” — as a young sometime-fan named Ernest Hemingway once put it.

It’s hard not to think that d’Annunzio’s public persona was something of an act, a self-caricature put on to get attention. Maybe it was; certainly, he never seems to have shown self-consciousness about the whole thing. The self-promotion started early. When he was 17 and publishing his second book of poetry, he anonymously informed the Rome newspapers that the young genius d’Annunzio had just been killed by falling off his horse — alas! By the time the “error” was discovered, he was famous, and the public was thrilled to learn the brilliant young poet hadn’t died after all.

The arc of his life connects the epoch of aestheticism and “decadence” of the 1880s and 90s (Whistler, Huysmans, Swinburne, etc.), and the age of Italian Fascism, to which d’Annunzio contributed both style (black uniforms, Roman salutes) and song. He didn’t write “Giovinezza, Giovinezza,” but that was the marching song of his followers when he was dictator of the city-state of Fiume in 1919-1920. After that, the Fascisti appropriated it as their own anthem.

Benito Mussolini called d’Annunzio a John the Baptist figure, “the first Duce,” and obsequiously modeled his own oratorical style on the poet’s. This admiration was not reciprocated. D’Annunzio considered Mussolini a buffoon, and the Fascisti a tawdry spoof of the heroic cult that d’Annunzio had hoped to lead. After Mussolini’s March on Rome in 1922, relations between poet and Duce were frosty. D’Annunzio was excluded from the new Royal Academy of Italy until Mussolini decided it might be good public relations to extend a welcome to Italy’s greatest living writer. D’Annunzio slapped back the belated invitation with a snarl: “A thoroughbred horse should not mix with jackasses. This is not an insult, but a eugenic-artistic fact.” [3]

Nevertheless people blamed d’Annunzio for Mussolini. One of them was Hemingway, who long hero-worshipped d’Annunzio, and met him once in 1918. Five years later, covering a Mussolini speech for the Toronto Daily Star, he saw the mimicry and the bombast, and decided d’Annunzio was a “jerk.”

What had happened in the meantime was the pinnacle of d’Annunzio’s public career, his 1919 capture of Fiume. Fiume, on the Adriatic, was a mostly Italian town, but had long been under Austrian rule, as indeed much of Italy had been sixty years earlier. Off in Paris, the Allied leaders at the Versailles Conference had decided to award Fiume to the new made-up country of “Jugoslavia” (as it was then spelled). Captain d’Annunzio, with about 2,000 fellow mutineers from the Italian army, marched upon Fiume and claimed it for the Kingdom of Italy. The Kingdom demurred, however, and wouldn’t take it. (A purely diplomatic move; Italy was one of those victors meeting at Versailles, and couldn’t be seen treating with freebooting renegades.) D’Annunzio and his followers thereupon declared Fiume to be an independent city-state, under the leadership of the poet himself. Each morning he went to his balcony and declaimed poetry and speeches to the appreciative crowds.

He had ambitions beyond Fiume. He was certain the new Jugoslavia would start to fall apart. And when it did, he and his army (with the aid of some unhappy Croats and Montenegrins) would seize territory from the oppressive Serbian regime in Belgrade. This, of course, didn’t happen. After 15 months d’Annunzio was forced out — but by Italy, which eventually agreed to annex Fiume. And Italian it remained until 1945. D’Annunzio in Fiume is often dismissed as a comic-opera figure whose coup ended in fiasco. But like Columbus with the egg, he showed Europe (and Mussolini) that the thing could be done.

The saga of this doughty little city-state on the Adriatic, standing fast against the might of the world, is something that ought to have appealed to Hemingway. But the mood of the time had shifted. Here was d’Annunzio in 1920, still exalting war in the style of 1914, calling for eternal vengeance and a ground soaked with blood. Hemingway took it all personally. He’d served as an ambulance driver on the Italian front, where he was wounded, decorated, and ever after appalled by the endless, meaningless carnage. Back home in Chicago, he wrote a little poem called “D’Annunzio.” It goes: “Half a million dead wops / And he got a kick out of it / The son of a bitch.” [4]

In her 2013 biography of d’Annunzio, [5] Lucy Hughes-Hallett says d’Annunzio’s life is the most thoroughly documented of any figure, in large part because he was an assiduous diarist, describing his daily doings in minute detail — the quality of the asparagus he was eating, the comeliness of the serving maid, and every lurid fantasy that sprang to his busy mind. Much of this note-taking served as raw material for his novels:

His works are full of descriptions of sex so candid they still startle . . . We have his descriptions not only of his lovers’ outward appearances but of the secret crannies of their bodies, of the roofs of their mouths, of the inner whorls of their ears, of the little hairs on the back of a neck, of the scent of their . . .

Et cetera. Too much information, suggests the biographer. For lack of a more precise category, his novels and poetry are grouped into the late-19th century Decadent school. But his obsession with the lurid and surreal probably has its closest approximation in the work of a painter, Salvador Dalí.

Images and ideas recur in d’Annunzio’s life and thought, moving from reality to fiction and back again: martyrdom and human sacrifice, amputated hands, the scent of lilac, Icarus and aeroplanes, the sweet vulnerability of babies, the superman who is half-beast, half-god. [6]