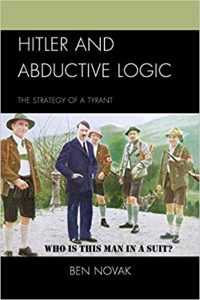 “Search your feelings. You know it to be true.”

Ben Novak’s Hitler and Abductive Logic is one of the most exciting academic books I have ever read, a daring and imaginative synthesis of philosophy, history, biography, and literature.

Since 1933, authorities have been sternly warning us that we must understand Adolf Hitler and his rise to power, lest we see his kind again. (They always assume that nobody would study Hitler because they wish to follow in his footsteps.)

Yet, as Novak argues, the most common explanations — labeling Hitler a demagogue, an opportunist, an organizational genius, an orator, and a master propagandist; or citing intellectual currents and social, political, and economic conditions — don’t really explain why Hitler had an edge over other ambitious and charismatic German demagogues and party organizers, operating in the same intellectual, political, economic, and social context.

Novak’s startling thesis is that Hitler’s decisive advantage was his unique emphasis on logic. In short, before he came to power and was able to compel obedience, Hitler was very successful at persuading people to join his movement and cast their votes for him. Hitler did not just stir people’s emotions. He changed their thinking. And he did not just change their thinking about quotidian political issues. He fundamentally changed people’s entire worldviews.

Hitler’s logic was not primarily deduction, which we learn about in logic class, or induction, in which we make probabilistic generalizations based on particular instances. Instead, Hitler was a master of what the great American philosopher Charles Sanders Peirce called abduction. No, abductive logic has nothing to do with kidnapping, although you might say that Hitler and his followers did get carried away by his ideas.

Abduction literally means to “lead away.” Abductive logic begins with observed phenomena that need to be explained and then leads away from them to a theory about their causes, framing the simplest and most likely hypothesis to explain them. Abduction is the logic of creating scientific theories. It is also the logic of doctors diagnosing illnesses, trackers following animals, and detectives solving crimes.

According to Peirce, abductive reasoning often seems entirely irrational. First of all, explanations for experiences are not experiences themselves. They are imaginative constructs — free inventions of the mind — that throw light on the world around us. Abduction is “based on instinct and sentiment (feeling, emotion) rather than upon abstraction. In the formal logic of deduction and induction, neither instinct nor sentiment has any role. However, abduction is the cultivation of those moments of insight, instinct, intuition, and inspiration in which new ideas, new inventions, and new discoveries occur. Thus abduction brings logic into the deeper recesses of the mind whence all scientific discovery proceeds” (p. 55).

Peirce ultimately believed that the human mind — including feeling and intuition — is in harmony with the universe, that man could not survive if he did not have the power to “guess nature’s way” from an infinity of possible wrong answers. Non-rational animals are all capable of following nature by non-rational means, and the emergence of human rationality merely extends and augments our pre-rational powers. The great mistake of rationalism is to talk ourselves out of accessing the pre-rational powers of the mind, which can only impoverish thinking.

Because abduction is fundamentally creative and draws upon intuition, “New ideas seem at first to be almost divinely inspired intuitions and often have a very special quality about them that verges on the supernatural” (p. 55). The uncanny quality of the origins of abduction also leads to uncanny effects, “binding minds to an explanation that, although unverified, has a power over the human mind unknown to other forms of logic” (p. 55).

Abductive logic is particularly relevant to a people facing confusing social and political upheavals, who seek an explanation for what is happening to them so they can frame a solution. In Hitler’s hands, abduction is the logic of what is dismissed today as “conspiracy theory.” What explains the otherwise inexplicable cooperation of New York bankers and Russian Bolsheviks? Hitler’s answer: blood is thicker than ideology, in this case, Jewish blood. Novak hastens to assert that “Adolf Hitler’s racial and anti-Semitic Weltanschauung was false.” But nonetheless, “as an amplified abduction, it was a very ‘high performance diagnostic system’ completely logical in form” (p. 54). (Given that Peirce was a pragmatist, does it even make sense to say that a theory which serves as a “high performance diagnostic system” is “false”?)

So is Novak arguing that Hitler read C. S. Peirce? No, Peirce’s writings on abduction were not even available during Hitler’s lifetime. But Hitler did not need to read Peirce, since Peirce was simply describing what people have always done when they advance hypotheses to explain mysterious phenomena.

One of the most fascinating aspects of Novak’s book is his history of discussions of abduction before Peirce. It turns out that abduction is actually the logic of the detective, the greatest literary examples of which are Edgar Allan Poe’s character C. Auguste Dupin and Sir Arthur Conan Doyle’s creation Sherlock Holmes. Abduction is also the tool of the tracker, such as Voltaire’s Zadig and Karl May’s Winnetou and Old Shatterhand. Hitler, of course, was an avid reader of Karl May.

Novak argues that abductive logic is not just useful as a description of Hitler’s technique of persuasion. It also throws light on key episodes in Hitler’s biography, for instance his failure in school, conflicts with his father, decision to become an artist, and ultimately his decision to enter politics.

But what most excites me about Novak’s book are the connections it suggests between politics and literature, especially the superhero genre, which is a topic that has long interested me. I have already discussed the connections between Carl Schmitt’s concept of sovereignty and superhero literature in “Superheroes, Sovereignty, and the Deep State.”

Sherlock Holmes is one of the primary sources of the superhero genre, just as Dr. Moriarty is one of the first supervillains. Novak convincingly argues that abductive reasoning is Holmes’ superpower. And, as Peirce pointed out, it often gives people the impression of supernatural abilities. In Holmes’ case, he is hyper-observant; he has a vast store of knowledge, both trivial and theoretical, that allows him to reason from his observations to their underlying causes; beyond that, he has a daring imagination; he also has lightning-fast intuitions; and he trusts them.

These powers allow Holmes to make surprisingly accurate inferences about people, sometimes even reading their thoughts. Hyper-observant people trust their intuitions and gut reactions, which allows them to access subliminal as well as conscious knowledge. Thus there seems to be something irrational and uncanny about their powers, when in fact they are simply better informed and more rational than ordinary men. (Hitler’s uncanny ability to read the moods of individuals or crowds — which observers described as “mediumistic” — is based on the same powers of hyper-observation and abduction.)

First of all, solving crimes is one of the duties of the state, which means that private detectives are performing political functions, but not officially.

Second, Holmes’ powers were so renowned that members of the political leadership caste sought his services which required bringing him into their confidence and relying upon his discretion.

Third, once Holmes solved a crime, he often found himself in the role of judge, jury, and executioner. In five stories, “The Blue Carbuncle,” “The Abbey Grange,” “Charles Augustus Milverton,” “The Second Stain,” and “The Devil’s Foot,” Holmes allows people to get away with what he considered to be justifiable homicides. In “The Speckled Band,” Holmes himself causes the death of the villain, by driving a poisonous snake into his room. When Holmes decides that justice has been done outside of the law, he is acting as a vigilante — which is of course what superheroes do — but he is also performing what Schmitt described as the function of the sovereign, and when a sovereign suspends the rule of law in a state of emergency, he is acting as a dictator.

If Holmes so desired, his superpowers would have allowed him to become a politician — or a dictator — which is ultimately how Hitler used the very same powers. In my essays on the superhero genre, I argue that superheroes serve as symbolic proxies for Jews, whereas supervillains are generally symbolic proxies for Nazis (here and here). Novak’s book adds to this thesis by arguing that Hitler actually had a few real-life superpowers.

Novak’s book also throws light on Frank Herbert’s Dune saga (and by extension, Star Wars, which rips it off). Some of the witch-like superpowers of the Bene Gesserit sisterhood are clearly modeled on Holmes’ skills of hyper-observation and abduction. Even the Jedi’s counsel to trust in feeling and instinct can be given a Peircean interpretation not as rejecting reason but as enriching it.

Hitler and Abductive Logic is a truly remarkable book. First of all, it is one of the most original and informative accounts I have ever read of Hitler. That alone would be enough to recommend it highly. But beyond that, Novak’s discussions of abduction in philosophy and literature are immensely stimulating to the intellect and imagination alike, opening up new prospects in philosophy, literature, and praxis. Thus it is a book that can do more than just illuminate the past. It can change the future as well.