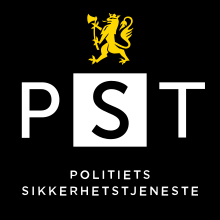 On November 2, 2019, I was detained by Norwegian police on the orders of the Norwegian Police Security Service (Politiets Sikkerhetstjeneste, PST) to prevent me from delivering a lecture at the Scandza Forum in Oslo.

Norwegian journalists investigating my detention have requested access to the PST’s letter explaining their rationale for my arrest. Their requests have been denied on the grounds that the document is “classified.”

However, it is my right under Norwegian law to see this document, and it is also my right to make it public, which I am doing below in JPEG and PDF formats. I have made only one alteration to this letter. I have removed the name and signature of the responsible officer, lest I be accused of some form of harassment.

The letter is followed by a translation into English (with thanks to Frodi Midjord) as well as my commentary showing that the PST simply copied the rationale for my arrest from a Left-extremist (antifa) blog that was openly trying to sabotage the Scandza Forum. Furthermore, the PST clearly failed to make even the most cursory attempt to verify the claims of such a biased source.

Finally, I point out that in addition to the frankly laughable claim that my speech at Scandza was likely to promote political violence, the PST makes it abundantly clear that their aim is simply to suppress freedom of speech and thought about alternative political ideas in Norway, and they are doing so at the behest of unelected and unaccountable Left-wing extremists. 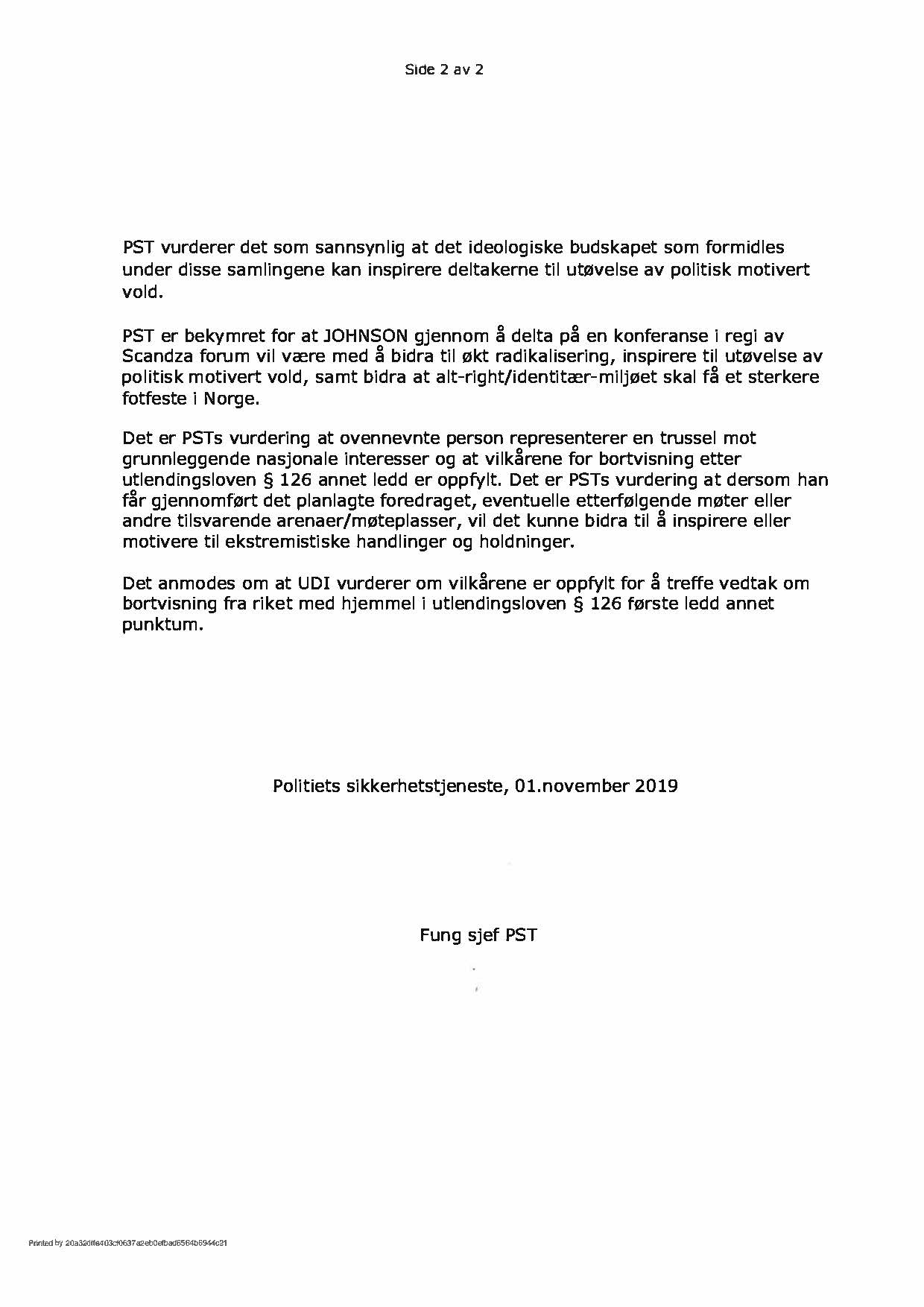 RE: REQUEST FOR REVIEW OF DEPORTATION

The case is: Greg JOHNSON, US citizen, date of birth unknown.

In reference to the phone call earlier today.

PST has information that the above may travel to Oslo Gardermoen Airport today.

According to public sources, Greg JOHNSON has been announced as one of the speakers at the Scandza Forum, which is being held in a secret location in Oslo on 02.11.2019.

Greg JOHNSON is one of the front men in a network of writers and lecturers who advocate Jew-hatred and racial theories, as well as White Nationalism. In the invitation to Scandza Forum’s conference on July 1, 2017, he was referred to as “One of the leading ideologues in the White Nationalist movement.” He is, among other things, the editor of the online Alt-Right publication Counter-Currents.

JOHNSON has previously expressed support for how Anders BREIVIK justified the July 22 attack, and has referred to the terror as “necessary.” JOHNSON also wrote an article following the BREIVIK trial describing his newfound “respect” for the mass murderer, who he believed had “acted out of loyalty to his people.” JOHNSON further describes that BREIVIK “comported himself in a dignified manner and made a forceful, intelligent, well-argued case for his views and actions.”

In a text published on May 18, 2012, JOHNSON supposedly wrote: “The Norwegian Labor Party is responsible for all of the violence caused by their policies, including the inevitable violence by Norwegians who get fed up and finally fight back.”

The Scandza Forum is an international network of Right-wing extremists who regularly hold gatherings in the Nordic countries. Previous meetings in 2018-19 have attracted 50-200 participants, several of whom have been well-known Right-wing extremists. Right-wing ideologues from the US and Europe are invited to speak at the meetings.

The PST considers it likely that the ideological message conveyed during these meetings may inspire the participants to engage in politically motivated violence.

PST is concerned that JOHNSON, through attending a conference organized by the Scandza Forum, will help contribute to increased radicalization, inspiring engagement in politically motivated violence, and help give the Alt-Right/Identitarian milieu a stronger foothold in Norway.

It is PST’s assessment that the above person represents a threat to basic national interests and that the conditions for expulsion pursuant to section 126, second paragraph, of the Immigration Act are fulfilled. It is the opinion of the PST that if he carries out the planned lecture, any possible subsequent meetings, or other similar gatherings, it could help inspire or motivate extremist actions and attitudes.

It is requested that the UDI [Directorate of Immigration] assess whether the conditions are fulfilled in order to make a decision on expulsion from the state on the basis of § 126, first paragraph, second sentence, of the Immigration Act.

The Norwegian Police Security Service(PST) letter of November 1, 2019 supporting my detention and expulsion from Norway is disturbing for three main reasons. First, I was detained and deported based on false information that the PST never bothered to check. Second, the main charge against me—that I am an apologist for terrorism—is a complete inversion of the truth, and a highly damaging one. Finally, the letter clearly indicates that I was expelled not simply because of the (wholly spurious) threat of political violence, but because the PST seeks to suppress National Populist (“Alt Right” and “Identitarian”) political ideas in Norway.

The case for my detention and expulsion was based on a couple of blog posts written by Harald S. Kungtveit and Jonas Skybakmoen on October 31st on Filter Nyheter, a Left-wing extremist (“antifa”) blog:

As I argue at length in my essay “Anarcho-Tyranny in Oslo,” these articles are deeply dishonest, quoting passages and single words of my essay “Breivik: A Strange New Respect” out of context to argue for a complete inversion of my meaning.

The PST’s letter, for example, copies the Filter Nyheter’s claim that I regarded Breivik’s terrorism as “necessary,” whereas taken in context it is clear that I am simply referring to Breivik’s own rationale for his terrorism.

The PST’s letter also copies Filter Nyheter in stating that after Breivik’s trial, I had a newfound “respect” for him, ignoring the facts that (1) “respect” is a relative term, and prior to his trial I had expressed utmost contempt for Breivik (see my article “Anders Behring Breivik: The Neoconservative Rambo”), so I had in effect raised him a few rungs in hell, (2) I concluded that Breivik still failed to make a compelling case for terrorism, even on his own terms, and (3) I offered my own powerful case against terrorism.

It is clear to me that the PST never checked the statements in Filter Nyheter. Whether it was out of collusion or simple incompetence needs to be determined.

Presumably, if the Norwegian PST thinks that I should be detained and deported to prevent me from giving a speech, they must think I am a highly persuasive individual. But if they had made even a cursory search to see the sorts of things I actually say, they would have learned that I am famous in White Nationalist circles for condemning terrorism. For instance, the last talk I delivered at a Scandza Forum meeting (Stockholm, March 30, 2019) was called “Against Right-Wing Terrorism.” Indeed, I have published more than a dozen articles over the years condemning Right-wing terrorism (listed here: “Greg Johnson Arrested in Norway for Thoughtcrime”).

If the PST is really interested in decreasing the likelihood of Right-wing terrorism, they should have welcomed me to Norway with a red carpet.

The PST argued that I be detained and deported because my speech was a threat to national security on three grounds: (1) that it “will help contribute to increased radicalization,” (2) that it will inspire engagement in “politically motivated violence,” and (3) that it will “help give the Alt-Right/Identitarian milieu a stronger foothold in Norway.”

First of all, I must point out the sheer absurdity that the PST somehow divined these outcomes were likely without knowing the topic or even the title of my speech. (My speech is called “The Very Idea of White Privilege.” The topic of the conference was Human Biodiversity.)

Second, when one drops the wholly spurious claim that my speech represents a terrorist threat, all that remains is the transparent motive to use the power of the state to suppress free debate and free thought about political ideas. The PST is, in fact, acting as the Thought Police.

I have many readers and friends in Norway. I was invited to Norway to address them. I am appalled that the Norwegian state sent police to prevent me from speaking.

But it is especially galling that I was detained under false pretenses concocted by Left-extremists whose express purpose was shutting down the Scandza Forum.

The charge of being an apologist for terrorism is especially alarming, given that in today’s world, people who are accused of terrorism are subject to extrajudicial imprisonment and torture, to say nothing of personal and professional damages.

It is deeply disturbing that such damaging charges from such suspect sources were not checked, as their falsehood could have been easily ascertained. This is a serious lapse of professional conduct and basic ethics. In a free country, the state does not pass down momentous, life-changing judgments and dispatch armed police to prevent an individual from speaking based on unchecked assertions made by his political enemies. This is the kind of behavior one associates with totalitarian states.