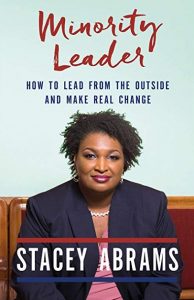 Stacey Abrams
Minority Leader: How to Lead from the Outside and Make Real Change
New York: Henry Holt & Co., 2018

If you are a white American, you are – right now – engaged in the Racial Holy War. You might not be interested in this war, but this war is interested in you. Bearing that in mind, one should read the books of our racial enemies to gain an important understanding of what they are thinking and plan to do. One such book is Minority Leader by Stacey Abrams, who is a black Democratic politician from Georgia, and she came very close to winning the 2018 Governor’s race. Her book is a mish-mash of basic positive thinking career advice that reminded this reviewer of what any corporate life coach or inspirational speaker would say. In fact, it is almost as simplistic as the message of one of the villains in Dexter, who was a life coach of some sort.

For example, she encourages us to list our goals and look at our strengths, weaknesses, opportunities, and threats (SWOT). I seem to recall that SWOT was one of the many acronyms I learned in the military two decades ago, so this is hardly original. Additionally, she divides mentors into several groups:

Situational: More related to the other person’s expertise.

Peer: Similar in age or position. Can help game out situations.[1]

While there isn’t anything original in it, it’s a respectable book of life advice for average or below-average performers. Ben Sasse’s book is considerably more insightful and applicable to modern circumstances. On a personal note, I’ve found that all books on career advice and life lessons leave out the really hard lessons, such as when to fire someone, how to weed out non-performers, or how to lead well even when you and your group are losing.

There is nothing about political policy in this book. There is no grasp of America’s problems and how to deal with them. In fact, much of the book consists of emotional descriptions of the various groups in the Democratic party: Koreans, homosexuals, Latinas, and so on. Oh, and she likes romance novels. Also, Abrams is deep in debt – student loans and other things have piled up, and this has caused her some setbacks. But the book does show two things very well from a “between the lines” perspective: the inner workings of American black culture, and the Great Replacement.

The most remarkable thing about American black culture is just how conformist it is. East to west, north to south, all American Negroes are the same. They have a similar outlook and react to everything in a highly predictable way. Race riots, like 2014’s violence, develop exactly as did the LA riots in 1992 and across the nation in the late 1960s. As soon as O. J. Simpson got a black jury, it was a foregone conclusion that he would be found not guilty, no matter what the evidence showed. On the individual level, blacks all act alike, and it seems they are highly policed by their own community to conform to the social norms of “acting black.”

Stacey Abrams found that this conformity stifled her work. She writes:

. . . I am still critiqued as cold and aloof, whereas among my white or male counterparts, the same qualities are seen as being composed and introspective. In my campaign for governor of Georgia, former colleagues have questioned how “black” I truly am because I did not take on certain issues or do more to disrupt the normal order. The critiques can be nullifying, eating at the core of who I am. More than once, I have found myself wondering if I have overcorrected, moving from one stereotype to another: from Shanaynay to Uncle Tom.[2]

Abrams mentions some other aspects of black culture. First, all blacks, no matter where they are in society, have relatives who are or have been involved in serious crime. Abrams has a brother who served a prison sentence, and her brother-in-law was also locked up for a crime he says “he didn’t commit.” As a result of this, the entire black community is fundamentally sympathetic to crime. No matter where they are on the social ladder, they are never far from the jungle.

Additionally, blacks have a hard time obtaining wealth. Abrams has several “answers” to this dilemma that amount to something like “When You Wish Upon a Star.” Abrams also has a warped view of white men: She believes that powerful white men rarely hear the word “no.” I find this somewhat baffling, given that such men are often beset by problems caused by other powerful white men. In such an environment, hearing the word “no” might be the politest thing spoken to them.

According to the book, Abrams’ political career began while she was studying at a historically black women’s college in Atlanta. Blacks in Atlanta rioted in sympathy with the blacks in LA during the Rodney King riots. As a result, the police cordoned off the area where she was living. Abrams organized a phone campaign to the local media to get their story out. This led to her meeting with Atlanta’s Mayor, the late Maynard Jackson. Abrams has been awarded many scholarships and other awards. Far from speaking truth to power, Abrams is a pet of the Establishment. (Amazingly, nobody in power endorses any black who has a vision of blacks leaving America and creating their own, independent country – a Black Zion, away from whites, and thus guaranteed to be free of racism.)

Stacey Abrams’ career is an example of how the dispossession of the majority (to use Wilmot Robertson’s phrase) actually works. In the context of the black community, Abrams is a high-end performer. In the context of the white community, she would be average – at best. However, the institutions of power, such as scholarship boards, deliberately overlook worthy whites to give advantages to non-whites who don’t behave in a pathological way.

Georgia: The Union’s most unstable state

Abrams’ power base is an example of further dispossession. Georgia is a victim of the Great Replacement – euphemistically referred to as “changing demographics” by the mainstream. There are several interlocking reasons for this. First, the foolish 1965 Immigration Act brought in many Third Worlders. On top of this, Atlanta has become a destination for many blacks who fled America’s northern cities – which they themselves destroyed between the 1940s and the 1960s.

Stacy Abrams’ campaign was the first of its kind in that she didn’t bother to seek out white votes. With the electorate so divided between whites and non-whites, there is no need for compromise. Georgia is a racial powder keg. If Georgia had a large white population and stable demographics, Stacey Abrams would comfortably fit in the mold of the many non-white grifters who have sprung up since “civil rights.” As mentioned above, she has no vision and no grasp of the issues outside of the problems that a race-hustler claims to be addressing. However, she came close to winning the Governor’s race because of the demographic changes, and she fulfills Peter Brimelow’s prophecy from his classic 1995 book, Alien Nation:

As that white voting bloc is reduced in relative size, ever more intense incentive will be offered enterprising politicians of all ethnic groups, including, perhaps, the almost-majority whites, to whip their own supporters into line in order to marshal their vote. Supreme power in American politics will have come within grabbing range – no longer for any one bloc but for an unstable, jockeying combination of them.

Georgia is a highly unstable polity and Stacey Abrams is an expression of that. Indeed, its instability is right there on the surface. Atlanta, famously, is a “city too busy to hate” – which is an admission that Atlanta’s civic leaders have to keep the economy humming to avoid any interracial reckonings. Georgia’s political establishment can’t even agree on common symbols: The state flag has been changed twice just since 2001. Indeed, Stacey Abrams burned Georgia’s flag in the 1990s because it featured the Confederate Battle Flag. Today’s is based on the design of the First National Flag of the Confederacy – but given the current political climate, a further change is certainly possible. In the end, there is no solution to Georgia’s instability but to proceed onward, towards the white ethnostate.