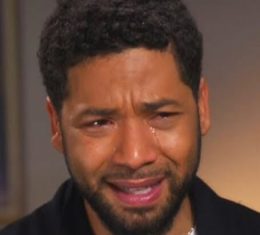 Jussie Smollett crying out of shame over his lies. Not.

The alleged “hate crime” against black actor Jussie Smollett turned out as we all expected: it was just another hoax.

To refresh everyone’s memory, Smollett – a singer and star on the black TV show Empire – claimed last month that he was assaulted by two white Trump supporters at 2 AM in downtown Chicago while it was experiencing subzero temperatures. He claimed that they asked, “Are you that Empire faggot?” and then attacked him. He said that the alleged assailants doused him with bleach and threw a noose around his neck, delivering an ominous message to him: “This is MAGA country.”

According to his own account, this all occurred while Smollett kept the Subway sandwich he was carrying safe, was talking to his manager on his cell phone, and simultaneously fought off his attackers. If we accept this, Smollett is apparently the real Black Panther.

Any sensible person knew this was a hoax from the start, this writer included. The whole thing seemed ripped from a bad episode of Law & Order. What diehard Trump supporters would recognize Smollett and know that he’s gay? Who conveniently happens to have bleach and a noose with them at 2 AM, in downtown Chicago of all places? Who would claim that the extremely liberal Chicago is “MAGA country”? How did Smollett protect his sub during this whole ordeal?  And unsurprisingly, he kept changing his story throughout the media saga, casting further doubt on the claim that he was telling the truth.

Last weekend, America finally got the truth. According to the two “suspects” arrested by police, Smollett paid them to stage the attack, and they even rehearsed the encounter with their “victim.” The two men aren’t white or American – they’re Nigerian. They didn’t even wear MAGA hats – they wore generic red hats from a boutique store. And one of them was Smollett’s personal trainer and had appeared on Empire.

Police speculate that Smollett orchestrated the incident after a hateful letter he “received” didn’t get enough media attention. So he decided to become a victim of a hate crime to further his ego, and to put an anti-Trump message out there as a bonus.

Smollett has yet to admit what really happened, and initially said he was angry that the attack was being treated as a possible hoax. It’s understandable why he maintained the lie for so long; the media bought it and enthusiastically promoted it, after all. One GQ column, for instance, claimed that the attack represented the “endgame” of white America. Smollett enjoyed a soft interview from ABC right as his story began to crumble last week, which of course conveyed the message that the black actor was the victim of a genuine crime.

The media wasn’t alone in this endeavor. Prominent politicians inveighed against the horrors of the attack. California Senator and Democratic presidential hopeful Kamala Harris called it a “modern-day lynching.” House Speaker Nancy Pelosi tweeted that “[t]he racist, homophobic attack on @JussieSmollett is an affront to our humanity. “ (Pelosi deleted that tweet after the attack was exposed as a hoax.) And Left-wing phenom Alexandria Ocasio-Cortez insisted that Smollett’s hoax was not “possibly” a racist or homophobic attack – “it was a racist and homophobic attack.”

We shouldn’t expect any apologies or lessons learned from these journalists and politicians. The mainstream media is already spinning away its role in promoting the hoax and falsely claiming that it covered the alleged assault with due skepticism. The media is now instead treating it as a tragedy, since it hurts all the supposed actual victims of hate. HLN host S. E. Cupp, a self-proclaimed “conservative,” argued that:

The giddiness among Trumpsters over the Smollett news is gross. This story is awful. He allegedly abused police resources, exploited raw divisions in this country, and made it harder for every victim of a hate crime to report. This is sad no matter your politics.

You can argue all you want that the Jussie story is vindication for Trump. That’s part of the story. But what he actually did is set a movement back. If you’re worried about race, gender, sex, trans threats . . . this imperils them all. That’s the important takeaway, not politics.

There was a real crime and a real victim in this story: Smollett and his media enablers committed a hate crime against white Americans.

The whole purpose of this hoax was to stoke anti-white hatred and portray every Trump supporter as a potential hate criminal. If you’re non-white, it would be reasonable for you to view whites with more suspicion and animosity after hearing the initial reports of what happened to Smollett. That’s the proper impression the Left wants non-whites to have. They want them to hate whitey, and hate hoaxes help the cause. When the GQ writer claimed the hate crime was white America’s endgame, it revealed the Left’s endgame: the disenfranchisement of whites.

To further this goal, the elites need Americans to believe white men are the real threat to the country. In this narrative, they’re committing all the hate crimes, terror attacks, and mass shootings, thus we need to take things away from them and reduce them to servile status.

In this view, more laws need to be enacted to tackle the “epidemic” of hate crimes, of course. Gun control, for example, must be passed to take weapons away from whites. The media needs to censor offensive viewpoints, such as the idea that immigration restrictions are necessary and that “it’s okay to be white,” so that hate doesn’t spread. In fact, the state needs to create hate speech laws so that whites don’t offend all the noble minorities. Too many whites in one area is a serious problem, so they need Section 8 housing and refugee resettlement to counter their bigotry through enforced diversity. And wearing a MAGA hat threatens minorities and justifies any attack against a person who does so – you know, for self-defense purposes. You don’t want to be the next Jussie Smollett, right?

As I wrote previously, this will not be the last hate hoax perpetrated by the media to stoke anti-white hatred. The media doesn’t even require actual crimes to further their overall agenda any longer. A white merely smirking at a non-white justifies white dispossession in their eyes.

The consequences for perpetrating hate hoaxes are too insignificant to dissuade future frauds. Smollett may indeed face legal penalties for what he did, but none of the journalists or politicians who colluded with him in the deception will pay a price for broadcasting and reinforcing this lie to the general public. They’ll claim that the attack fit the hateful climate, so they were easily duped. Thus, there’s no reason to reflect on why they were so wrong.

The good news is that millions of average white Americans had already seen through the bullshit and are thus less likely to be susceptible to future tall tales. They’ve seen this story play out a thousand times before, and they know deep down that there’s something insidious in these hoaxes, and that it’s weird anti-white sentiments which rise to the fore in these cases.

If the media lied to you about this attack and blamed your entire race for it, what message does the average white person take from this affair?

It’s the little things that wake people up. Always remember that.