The “Hate Crime” against Jussie Smollett 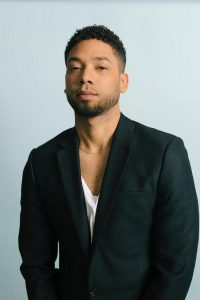 Downtown Chicago is full of Trump-loving, ski-masked racists. At least, that’s the assumption made by people who believe the incredulous hate crime tale of Jussie Smollett.

Smollett is a gay black man who stars in the popular black television series Empire. He is also a rapper. Smollett claims he was beaten in the early morning on January 29 in Chicago by two white men in ski masks who recognized him as “that faggot Empire nigger.” His two alleged assailants knocked him down, tied a noose they just happened to have with them around his neck, and then poured an unidentified substance onto him. During the alleged assault, Smollett’s attackers proclaimed that downtown Chicago was “MAGA country.”

That’s a curious thing to say, considering Donald Trump only received 12.5% of Chicago’s vote in 2016 and the city is 31.7% non-Hispanic white. That’s not exactly MAGA country demographics. It’s also unlikely that violent Trump supporters would recognize any cast members from Empire and know important details about them.

This alleged hate crime was readily believed by the mainstream media, and Smollett was lionized as a noble victim. Unsurprisingly, this story seemed fishy right from the start. First, it was the contradictory reports that the Chicago Police didn’t know about the “MAGA country” remark. Then came the hunt for video evidence of the attack, which didn’t turn up any footage of the actual assault. The only thing that came from thousands of hours of camera footage on multiple streets that the police reviewed are two suspicious dark shapes walking on the opposite side of the street from Smollett.

Smollett was captured on video for all but sixty seconds. After the sixty seconds where he disappeared into an alley, Smollett reappears with a noose hanging around his neck like a tie. That’s an awfully short amount of time to suffer such a severe attack.

More fishy details have continued to emerge. Smollett’s manager claimed he was on the phone with his client during most of the attack and heard the “MAGA country” remark. That wasn’t initially in the police report, and, most suspiciously of all, Smollett and his manager refused to hand over their phone records to police.

Smollett decided to add another element to his story that reinforced the idea that the whole thing was a fabrication. As he returned to the stage after the supposed attack, Smollett bragged that he “fought the fuck back” against his attackers. That seems impossible considering his story and that he kept a cellphone in his hand throughout the entire assault.

Police provided another odd detail that undermined his account. According to authorities, Smollett was carrying and managed to protect a Subway sandwich throughout the brutal attack, and emerged with the undamaged sub in his hand when he reappeared on the surveillance footage.

To summarize, Smollett was brutally beaten in less than sixty seconds in a diverse, anti-Trump city. His violent, racist attackers knew he starred in a show that is not generally watched by people likely to be Trump supporters, or who would know his sexual orientation. They also somehow believe that their diverse, anti-Trump city is MAGA country. Additionally, in his own words, Smollett fought off his attackers while simultaneously pinned to the ground, talking on his cellphone, and holding onto a Subway sandwich.

Count me as a skeptic.

Police also appear to be skeptical. One local reporter said that his police sources thought the whole thing was a hoax. Police are currently requesting the phone records of Smollett and his manager.

Even without the additional details and the changing story from Smollett’s camp, the whole thing seemed unbelievable. America has experienced way too many hate hoaxes recently to fall for such a ridiculous story as this one. And yet we all had to sit through another case of the mainstream media falling for one. Smollett was still able to bask in his noble victimhood, even as his story unravelled. Nearly every outlet faithfully reported his “fought the fuck back” comments without any hint of doubt.

GQ covered his first performance since the alleged assault with this celebratory headline, “Jussie Smollett Is Defiant at His First Performance After a Racist, Homophobic Assault.” There was no “alleged” in the headline, nor any indicators in the article that we should perhaps not absolutely believe Smollett’s story.

Indeed, earlier in the week, GQ had published an article on why everyone should definitely believe that Smollett was a victim of a hate crime: because it confirms the Left-wing narrative on hate in Trump’s America. The writer, Joshua Rivera, was incensed that the alleged crime was being treated as a “possible hate crime” by police rather than as a definite one. Rivera believes these attacks are very common, and argues that “almost all violent extremist crime is committed by right-wing terrorists.” This writer claims that the attack fits into the grand scheme of whiteness: “Whiteness in 21st century America has an endgame, and it is this: to divest itself from the shame of its power, while working to revive the fear it needs in which to thrive.”

Rivera concludes his article with an affirmation of his blind faith that this attack occurred by dismissing the disputed facts of the case:

A still-disputed aspect of the attack on Smollett is a line shouted after his attackers fled the scene: “This is MAGA country.” While its veracity isn’t confirmed, its sentiment needs no fact-check. America’s choice to embrace the blind rage of late-stage whiteness in decline is an explicit longing for this kind of crime, a version of America in which those who do not assimilate to the satisfaction of their white, straight, and Christian betters are subject to the impunity of law enforcement, the scorn of the media and the fury of racist homophobes stalking the streets of your city, who want you to know that they could lynch you if they really wanted to, and maybe get away with it too.

Imagine believing that whites easily get away with hate crimes in 2019 America!

Even those writers who accepted that elements of the case didn’t add up still chose to believe that it happened because it aligned with their preferred narrative. Chicago Tribune columnist Dahleen Glanton, who is black, noted that many parts of the story seemed unbelievable, such as Trump supporters rampaging in liberal Chicago at 2 AM in freezing temperatures. And yet Glanton also urged her readers to believe the case because “[w]hy are we so obsessed with who committed the crime rather than dealing with the fact that such crimes routinely happen across America?” She concluded by saying, “At this point, we should all consider Smollett the victim of a horrible hate crime. And in Chicago, we should stop pretending like horrible things like this could never happen in our city.”

The belief that angry white men are the primary threat to non-whites in Chicago cannot be challenged by common sense or facts. It must be accepted by all.

Ever since Trump was elected, hate hoaxes have proliferated to an all-time high. There was the Muslim girl on the New York City train who claimed she was assaulted because of her hijab. That was bullshit. There were dozens of threats to Jewish community centers that turned out to be the work of an Israeli teenager and a black journalist. American Renaissance maintains an extensive database of hate hoaxes, many of which resemble the Smollett case. Many non-whites have sought to fabricate crimes against themselves to win fame and attack the white majority.

Smollett is a vocal Trump critic who made an entire music video showing his disdain for the President. He also has a career that would benefit immensely from suffering a “homophobic” and “racist” hate crime. He knows what kind of message to send to get the Left and the media on his side, as he concluded his most recent performance with, “Be as black, be as brown, be as gay as the fuck you want to be!” Be anything that sets you apart from the evil, Trump-supporting crowd.

Hate hoaxes meet the Left’s demand for victimhood. Leftists need to believe that Trump’s America is full of violent racists who will attack non-whites at a moment’s notice. If this is widely believed, it makes it easier to call for laws criminalizing hate speech and greater law enforcement attention to “hate groups.” This false notion also satisfies the Left’s persecution mania. Even though Leftists and their sympathizers control nearly every institution in our society and can speak as freely as they want, they still consider themselves to be suffering under an oppressive, white supremacist regime.

Since there are not enough real hate crimes to satisfy this mania, media outlets continue to readily accept any that are staged for them. The Southern Poverty Law Center and others tell them that hate crimes are skyrocketing, so why should they doubt that emboldened white racists would travel to Chicago to attack Jussie Smollett?

It is true that Chicago has witnessed disturbing hate crimes in recent years – against white people. In late 2016, there was the white motorist who was pulled out of his car and beaten by black youths because he looked like a Trump supporter. In January 2017, there was the mentally handicapped white man who was kidnapped and tortured by blacks because of his race. Those cases were largely ignored by the media outlets currently hyperventilating over Smollett’s tall tale. CNN commentator Symone Sanders mocked the motorist’s beating at the time with the statement, “Oh my goodness, poor white people!”

Hate crimes against whites are rising in the Trump age, yet they still receive scant attention from the mainstream media. Both of those anti-white assaults in Chicago were caught on camera and were undisputedly motivated by hate. They didn’t conform to the preferred narrative, however, so they were ignored.

When Smollett’s story turns out to be a fantasy, we won’t see any mea culpas from the folks who promoted it or any improvement in the coverage of such bogus claims. It’s just too advantageous to propagate hoaxes for their cause.