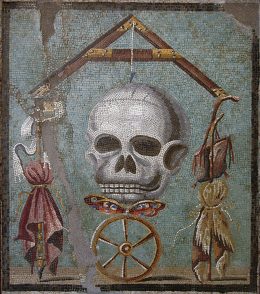 This is the text of the speech I gave at the Erkenbrand Conference in the Netherlands on Saturday, November 3, 2018. I wish to thank the Erkenbrand organizers and everyone in attendance.

The good news is that everyone likes to get good news. It is easy to bring good news and easy to receive it.

The bad news is that nobody likes to get bad news. It is hard to bring bad news and hard to receive it. Receiving bad news is upsetting, which is why bringing bad news is difficult. Sometimes one has to deal with tears and anger.

Because bad news is upsetting, people often respond to it irrationally. Sometimes they would prefer not to know, even though you can’t solve problems you don’t know about. Sometimes they misplace their emotions. Instead of getting upset with the problem itself and seeking to solve it, they get upset with the bad news and seek to punish the bearer. But this is foolish, because society works best when information flows freely, and the most important information is bad news.

Because receiving bad news is upsetting and giving it is risky, dealing with bad news is a test of character. Those who receive bad news have to master their emotions, for if you dissolve into tears or explode into anger, you are making it more burdensome to bring you bad news in the future, which means that you might not receive news about a problem until it is too late to rectify it. Bringing bad news is also a test of character, because one always risks unpleasant personal consequences, but sometimes short-run personal risks are necessary to secure the greater good in the long run. But since the bearers of bad news are doing us all a favor, it is incumbent upon us to reduce the risks to the absolute minimum. This is why freedom of speech needs to be a right enshrined in the fundamental law of every land.

The two most important things for White Nationalists today are:

White Nationalists are the bearers of bad news: that diversity is not a strength, but a source of alienation, conflict, and violence; that modern politics and morals have put our race on a path to extinction; and the only solution is to abandon liberalism, hedonistic individualism, globalization, and multiculturalism and bring back healthier, pro-white policies and values. We are changing people’s minds, and the establishment is powerless to change them back. Thus they are trying to censor us.

How can we deal with this threat?

In the short run, we need an internet Bill of Rights to protect dissidents from censorship and deplatforming. Beyond that, we need an across-the-board ban on politically-correct terms of service and employment, so we are free to dissent without threatening our livelihoods and social capital. If we can get such legislation in place, I am confident that we can win, and sooner rather than later. We will change so many minds that we will reach a tipping point. The taboo against white identity politics will melt away. Pro-white values will pervade the culture. Eventually we can mobilize enough support to overthrow the existing political establishment and replace it with a pro-white one.

But who told us that this would be safe and easy? White Nationalists are battling against the most all-encompassing soft-totalitarian system in history. It is a system bent on nothing short of the genocide of the white race, a goal so evil that when Plato and Aristotle drew up their lists of bad regimes, it was simply inconceivable. To overthrow this system, we might have to risk much more than our livelihoods. We might have to risk our very lives.

In the long run, though, we are probably going to win even if we don’t get an internet Bill of Rights. Censorship can slow us down, but it can’t really stop us. Already people are laying the foundations for a new internet that will be free of the choke points where censors perch. Thus, ultimately, the only way to prevent us from getting our message out online will be to shut down the web entirely. But the establishment cannot contemplate that, because the global political and economic system depends on the Internet.

The establishment — or at least the tiny stratum that is fully aware of the present threat of white identity politics — has the same relationship to the Internet as a junkie to his habit. He knows that it will kill him in the long run. But very few junkies overcome their addiction because they cannot bear the short term pain, even if it is the price of long-term survival.

Human beings might best be defined as the intermittently rational animal, and one of the most pervasive forms of irrationality is pursuing short-term self-indulgence at the expense of long-term well-being. This is how nations and individuals get into debt; this is how economic, demographic, and ecological crises arise. Fortunately for us, it is also how the system will fail to do the only thing that can stop the rise of White Nationalism — until it is too late.

So be of good cheer. If we continue to get out message out, we will win. And internet censorship cannot stop that process. It can only make it slower and more difficult.

Once we win, what should  our attitude be toward free speech? Some White Nationalists see free speech as merely a means to take power. I wish to argue that free speech is something that we will want to keep after we win.

Freedom of speech is a value because we are all fallible and vulnerable. Fallibility means that we can make mistakes. We can have false or inadequate pictures of the world which can be improved upon. Vulnerability simply means that unforeseeable contingencies can upset our best laid plans. To overcome mistakes and misfortunes, we first need to know about them. That means that we need the freedom to be the bearers of bad news. We need freedom of speech, because it makes genuine intellectual and social progress possible.

Why do people oppose freedom of speech? There are two main reasons.

First, some people think they already have the truth. This truth is, moreover, absolute: It is complete and not subject to revision. Any contrary position is, therefore, a falsehood. This is why religions in the Abrahamic tradition — including Marxism — have opposed freedom of speech. They claim to be absolutely true. Therefore, all other religions are false — or, at best, semblances of the truth — and must be suppressed.

Second, people with a vested interest in a given political and economic system don’t like criticism because it threatens their power and peace of mind.

Both views are irrational.

We all make mistakes. We all suffer misfortunes. But only some of us are destroyed by them. Others learn from them and overcome them. But, again, the first step to overcoming a problem is knowing that one has it.

Years ago, I read a listicle on signs that your boss might be a narcissist. The item that made the strongest impression on me is: Narcissists tend to punish bearers of bad news.

Everyone makes mistakes. The path to self-actualization requires that we acknowledge our mistakes, take responsibility for them, learn what we can from them, and then rise above them. The narcissist, however, seeks to preserve his positive self-image at all costs. So when confronted with his mistakes, he denies them and doubles down on them. Or he blames others for his mistakes. Or he goes on the attack, particularly against the bearer of bad news. Anything, really, to avoid taking responsibility and acknowledging that he might have some room to learn and grow.

Narcissists may be highly attractive people. They may have enormous potential. Unfortunately, they think they are perfect just the way they are, and such complacency is deadly to personal growth. So as time passes, you will notice that narcissists seldom actualize their potential. Instead, they come off as dilettantes with a smooth patter. Older narcissists also seem increasingly puerile when compared to their contemporaries.

Obviously it is disastrous to put narcissists into positions of power, because they end up making important decisions based on false or incomplete information fed to them by flatterers. It is no way to run a society.

Our anti-white oppressors, of course, do not see it that way, for that would threaten their positive self-image. The rise of white identity politics cannot be their fault. So it has to be our fault. They think white identity politics only exists because silver-tongued deceivers like Jared Taylor and Millennial Woes have Twitter accounts. Which is why they conclude that censorship will actually stop us. But White Nationalists are not the cause of ethnic conflict. We are just the bearers of bad news — and advocates of a workable alternative.

Censoring White Nationalists online does not stop people from noticing things, drawing conclusions, and formulating dissenting thoughts. It does not prevent people from discretely communicating their thoughts face to face or organizing in the real world. All censorship does is render the full extent of dissent invisible. This makes it difficult for the establishment to make rational political decisions. Censorship does not make the system stronger; it only makes it blinder, brittler, and more vulnerable. Advocates of censorship are like people who remove the battery from their smoke detector because they are tired of false alarms. But when the house catches fire, you need to know sooner than later.

But if we win, are we really going to give our enemies the freedom to regroup and rebrand, then lead our people back down the road to extinction once more? Don’t we want to shut their dirty, lying mouths forever?

There are two points here.

First, if we do come to power, we will have to purge the existing institutions. We will not leave wealth, influence, and political power in the hands of implacable enemies. We will take away their platforms in politics, the media, and the academy. We will just give them early retirements and a lifetime ban on addressing the public. Then we will fill their positions with people who are loyal to us. But that is a far cry from instituting a regime of intellectual censorship.

Second, even if there is a great purge of the existing system, no matter what kind of society you have, in every generation, there will be aberrant personalities who are drawn to ideas that threaten social order. The best way of preventing bad ideas and institutional subversion from taking root again is not to create a world where people have never heard of such things. Instead, we need to create a world where everyone has heard of them. A proper education imparts sound information as well as healthy values and tastes. Such an education will inoculate us against bad ideas. We don’t have to censor bad ideas if we are immune to them.

Evil will always be with us. But we need not fear it if we are immune to its charms. We should keep evil around, but keep it powerless, as a kind of memento mori, a death’s head at the feast, so we have a constant reminder of the hell on earth we will vanquish — but only if we start using, and defending, our freedom of speech today.

« An Esoteric Commentary on the Volsung Saga, Part V