On the Kevin MacDonald–Nathan Cofnas Debate
Part 2: Universalism vs. Particularism 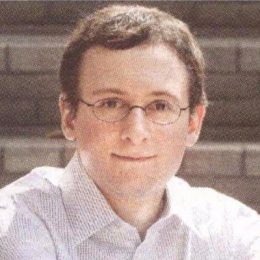 In the first part, I provide an introduction to this debate, a recap of Kevin MacDonald’s counter-Semitic opus The Culture of Critique (hereafter, CofC), a summation of Nathan Cofnas’ major arguments against CofC, and also call into question Cofnas’ objectivity in this debate.

As mentioned in Part 1, Cofnas employs two primary strategies in his attempt to analyze and ultimately refute CofC. The first is to adopt a “universalist” approach by finding counter-examples which do not easily fit into MacDonald’s “particularist” theoretical framework, and the second is to promote his Default Hypothesis as a more elegant alternative to what MacDonald offers in CofC.

This part will deal exclusively with Cofnas’ “universalist” approach.

For a visual depiction of the universalist-particularist axis, observe the Venn diagram below: 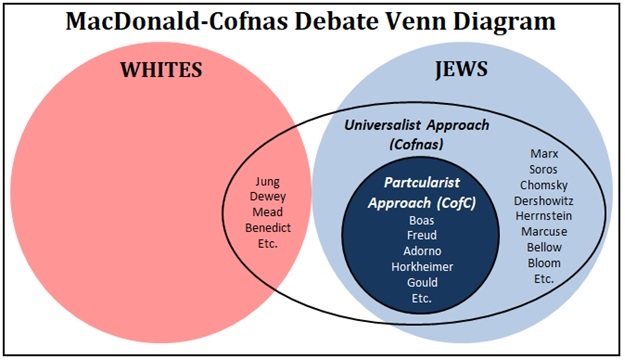 According to the “De Facto Ranking” from Part 1, MacDonald attempts to show in CofC that the people in the dark blue circle:

Through his use of universalism, Cofnas most often challenges MacDonald’s scholarship regarding Points 2 and 4 above for each of his subjects. By almost never even attempting to disprove Points 1 and 3, and by seemingly rejecting MacDonald’s use of particularism from the start, however, Cofnas reveals that his universalist approach poses only a trivial challenge to CofC. It’s also what makes their debate so tedious, since he and his team have dug up every scrap of evidence they could find that questions, down to the minute and second, the degree to which Boas or Freud or whoever really identified as Jewish, or really pushed for Jewish interests. This, of course, takes us far from general interest and forces MacDonald into a factoid competition with Cofnas over who can assemble the most obscure tidbits about this or that historical personage.

In the pink section, Cofnas finds white gentiles who, in essence, behaved like the Jews MacDonald describes in CofC. In Cofnas’ mind, this inconsistency weakens MacDonald’s theory since, presumably, gentiles could not possibly play prominent roles in movements which identify as Jewish. From Cofnas, page 9:

It is true that many of Boas’s students were Jews (e.g., Alexander Goldenweiser, Melville Herskovits, Robert Lowie, Paul Radin, Edward Sapir, and Leslie Spier)—not particularly surprising given the high concentration of Jews at Columbia University at the time. But the most effective and indefatigable “Boasians” were not Jewish. MacDonald (1988a:26) notes that the students of Boas who “achieved the greatest public renown” were the gentiles Ruth Benedict and Margaret Mead. He expounds: “As in several other prominent historical cases . . . gentiles became the publicly visible spokespersons for a movement dominated by Jews.” According to MacDonald (1988a:27), Boas “strenuously promoted and cited” Benedict and Mead as part of a ruse to hide the fact that the whole movement was designed to promote Jewish interests.

But MacDonald does not supply any compelling reasons to think that Benedict and Mead were under the control of Boas.

Cofnas’ sophistry accomplishes several things. It takes us away from the damage Boas did by leading the successful charge against Darwinism in the social sciences (one of MacDonald’s most important points). It also forces MacDonald to argue Benedict and Ruth’s motivations (did they follow the Jewish Boas out of self-interest? Sincere belief? The guru phenomenon?). Finally, by suggesting that Benedict and Mead were “under the control of Boas” according to MacDonald, Cofnas forces MacDonald into the tiresome task of clarifying what he did or did not write.

Cofnas pulls off the same trick with John Dewey, the liberal gentile philosopher who promoted progressivism and multiculturalism in the first half of the twentieth century, and psychologist Carl Jung, who for a time was the heir apparent of Freud’s school of psychoanalysis. Were these two gentiles appointed by powerful Jews to be the face of their nefarious movements? Were they leading lights in their own right who just happened to have a lot of Jewish associates and supporters? Or was it a combination of the two? This may be an interesting topic per se, but it has little to do with the reason why this debate is so important. Note also that no matter how you answer these questions, Cofnas’ universalism focuses more on Points 2 and 4 than on Points 1 and 3 in the De Facto Ranking. Like Oz, he succeeds in deflecting attention away from the true villains behind the curtain.

Cofnas also employs universalism when he brings up a long list of Jews who do not fit in the mold found in CofC. In his “Analyzing Kevin Macdonald’s ‘Culture of Critique’ and the alt right’s embrace of anti-Jewish Ideology,” Cofnas writes:

Most significantly, I found that Jews were clearly overrepresented in the leadership of violently opposing political movements—a fact that favors the default hypothesis. Although Jews have been overrepresented among prominent blank-slatists and anti-hereditarians (e.g., Stephen Jay Gould, Richard Lewontin, Ashley Montagu), they have also been some of the most prominent defenders of the concept of human nature and hereditarianism (e.g., Steven Pinker, Jonathan Haidt, Hans Eysenck, Richard Herrnstein). Many of the most important supporters of Israel are obviously Jewish, but some of the biggest critics of Israel are also Jewish (e.g., Noam Chomsky, Norman Finkelstein, Judith Butler). . . . Psychoanalysis was led by Jews, but its most important opponents were Jews (e.g., Karl Popper, Hans Eysenck, Aaron Beck). Many leading opponents of white nationalism are Jewish. But at the first conference of the one major non-anti-Semitic white nationalist organization—American Renaissance—in 1994, four-out-of-ten of the invited speakers were Jews (including an orthodox rabbi).

Cofnas hits MacDonald with such objections too many times to count, and MacDonald’s response is always the same: he understands the Jewish community is not monolithic; he even said so in CofC. But addressing the diversity of Jewish viewpoints was never his intention. Here is a typical MacDonald response ( “Second Reply to Nathan Cofnas,” page 10). See if you can sense his losing patience with Cofnas in his phrasing:

But as I keep repeating (which again makes me think motivated cognition is in play here), I am not arguing that all Jews even have the same sense of Jewish ethnic interests or even any sense of Jewish ethnic interests. Some are only weakly involved, some may be strongly identified but rationally disagree on strategy and tactics with the dominant movement. I do want to study specific movements that are influential, and I want to determine the extent to which Jewish identities and perceptions of Jewish interests are important for the main figures. There is nothing wrong with leaving it at that. Jewish viewpoint diversity and its relation to the extent of Jewish identity and sense of Jewish interests are certainly important topics to study, but not germane to CofC.

So universalism butts heads with particularism, and neither wishes to give an inch. But if you reject the paradigm a scholar chooses for his work, why bother criticizing the work? Why not just criticize the paradigm? If Cofnas had objected to MacDonald with a paper entitled “Kevin MacDonald’s Particularist Approach to Influential Twentieth-Century Jewish Political and Intellectual Movements Should be Shunned Because it Makes Jews Look Bad and Opens the Door for Anti-Semitism,” that at least would have been honest. He would be sparing MacDonald and his readers hours of tedium and would be taking up where MacDonald left off. He may be right or wrong, of course, but at least he wouldn’t be launching blatantly prejudicial attacks on an important work and besmirching the reputation of an innocent scholar.

I have final points to make about Cofnas and his universalism. The first is, his Jewish counter-examples often challenge Point 4 of the De Facto Ranking by bringing up Israel. How can the Jews in CofC be promoting Jewish evolutionary interests when they opposed Zionism or Israel? Aren’t Jewish interests and Israeli interests one and the same?

This puts MacDonald in a bit of a bind since it forces him to admit that not all Jews agree on what Jewish interests are, while at the same time arguing that they are indeed pursuing Jewish interests. This, then, leads to the following objection: If the Jews themselves cannot agree on what Jewish interests are, why should we believe what the gentile Kevin MacDonald has to say about it? Is it because he knows the Jews better than the Jews do? Or is it because he defines Jewish group interests as whatever works against gentile group interests? I believe this is a fair objection.  And while MacDonald does a fine job of addressing it (both in this debate and in CofC), he does have to do more work than merely insisting on his particularist model, as he does in the quoted passage above. Although this isn’t MacDonald’s fault, I’m afraid his explanations in this regard might come across as less convincing to readers who are skeptical of him to begin with.

I believe that Israel, however, is a red herring and gives Cofnas a means by which to introduce unnecessary complications into this debate. A slight reworking of the theoretical framework of CofC, however, can easily remove Israel from the discussion, thereby stripping Cofnas of one of his most powerful weapons. I will offer more on this in Part 4 of this series.

My second point is that many of these counter-examples should be ruled out, regardless of their attitudes towards Israel. For one, Cofnas unfairly trots out Jews who were beyond the timeline of CofC. The words “twentieth century” appear in the book’s subtitle, so this time frame should have been clear to him. So why bring up Karl Marx, who died in 1883? Why mention George Soros who, in 1998, when the book was published, hadn’t yet become the prominent Leftist and globalist he is today? In his comments to MacDonald’s “Reply to Nathan Cofnas,” Cofnas even brings up the overrepresentation of Jews in the anti-Israel Boycott, Divest, and Sanctions (BDS) movement. BDS was founded in 2005, well outside of CofC‘s time frame. How could any of these be seen as reasonable objections?

With the exception of Chomsky (whom I believe deserved greater attention in CofC than he received), many of Cofnas’ counter-examples also fail because they lacked the far-reaching influence of the Jews MacDonald discusses in CofC (Point 1 of the De Facto Ranking). MacDonald defends himself perfectly well on this account, such as when he demonstrates that Jewish hereditarian Richard Herrnstein, admirable scholar though he was, did not have anywhere near the impact of a Stephen Jay Gould. Therefore, placing Herrnstein on equal footing with Gould in CofC just because they were both Jewish, yet held opposite views, would have violated MacDonald’s stated methodology. Cofnas, it seems, prefers to just count heads and ignore influence, as if this is at all persuasive (I’ll see your Freud, Adorno, and Gould and raise you one Popper, Bloom, and Herrnstein!). Yet he only counts heads when it is convenient to his critique. Above, he provides a list of six Jewish Boasians (seven, if you count Boas himself) only to focus on two gentile ones (Mead and Benedict). Why? Because those two were more influential than the others. So how can Cofnas fault MacDonald for including influence in his methodology when he does it himself?

If he wants to be taken seriously with his universalist objections, Cofnas needs to show more respect for the parameters MacDonald chose for CofC. He also needs to find a tack and stick with it.

Spencer J. Quinn is a frequent contributor to Counter-Currents and the author of the novel, White Like You.