Use Hate Speech—It Makes You Powerful 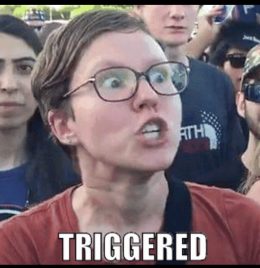 For any leftists who are lurking on this website, let me disappoint you from the outset: this essay is not about why whites should call blacks “the n-word.”

Not long ago I saw an old high school friend I had lost touch with for several years who, most unfortunately, has joined the ranks of our reigning elite. Now a Social Justice Warrior (SJW) at a prominent law school, she is one of those people who genuinely thinks Slavoj Žižek is a deplorable racist who must be cast out of leftist thought. I am fairly upfront about what I believe, so our reconnection got off to a rocky start. As is often the case though, things eased up a bit after a few drinks, and I was reminded of why we were friends so many years ago.

Then a funny thing happened: I used the word “negro” and she went ballistic. I used the word because I was quoting someone who had used it, a black guy I used to know, while telling an anecdote. After her tirade, I pointed out the context to her—as if she were somehow unaware of it—and asked if I was not allowed to quote black people. She assured me that I was not unconditionally allowed to quote blacks, no. I told her that that seemed silly, and that, moreover, it was clear I had intended no malice when I said it, and on top of that, no blacks were around to hear me say it and be hurt. I waxed philosophical: “Is it really hate speech if only white people hear it?” She was clearly annoyed, but relented, and said, “just finish your story.” I intended to, and picked up slightly before my prior point of interruption:

“So like I was saying, then K-Lo told me, ‘What you need to do is find yourself some big ass negro and—’”

“Did you really fucking need to say it again!?” she screamed, rhetorically. I couldn’t help myself and started laughing. Once again we went around in circles over whether we have some kind of “right” to use that particular word or not. Like every censor who is without the power or will to use violence, she glibly recommended a great number of alternatives that could, in her eyes, replace my offending syllables. And like every censor, she also went to great lengths to explain to me why my offensive word was “unnecessary” and “unneeded” for what I was trying to communicate. After a few minutes, I was allowed to finish my anecdote, which I managed to do without saying the word “negro” again.

But that was hardly the end of it. Over the course of the evening, I said “retarded” once and “faggot” once. Both words sent her over the edge and required a whole tangential conversation to “unpack” what had happened. I was not trying to offend her, by any means—I am not a troll. “Faggot” and “retard” are just words I use in casual conversation. I grew up using them, and more importantly, I find them descriptive and vibrant. “Negro,” is not a word I use, but when I quote someone, I am going to do so accurately. None of this bothered my friend when we were both teenagers, but since then she’s attended more than one elite institution of higher emoting.

The next day, in thinking the evening over, I had an epiphany. It was a realization so obvious, I did not have it until well into my twenties: by being so sensitive, my friend was granting me a unique power over her. Had I wanted to, I could have upset her as frequently as I liked. All it takes is the verbalizing of a few key words and I can send her into conniptions. This power is akin to a “cheat” in a video game, a voodoo doll, or some kind of pagan spell that delivers great injury to someone by saying just a few magic words.

You and I have no such weakness. There is no word in the English language (or any other) that when uttered, sends me into fits or bouts of moralistic shouting. SJWs, meanwhile, can have their entire days ruined by accidentally overhearing a word or two. Remember, these sorts of reactions to “nigger” and other outdated epithets are learned—not organic. SJWs have chosen to make themselves this way. SJWs view it as virtuous to be so sensitive. Put another way, they view weakness as a moral good.

So why not exploit that? SJWs deserve to be reminded of how backwards their worldview is, and how insane it is that they have elected to adopt an ideology that makes them weaker. One superb (and low-cost for you) way of doing that is to mercilessly weaponize the very weakness they have donned in an attempt to signal their moral superiority over the rest of us. In this sense, hate speech makes us powerful—so use it.

If you cannot think of a good way of introducing this tactic with the SJW in your life, consider asking him this: “Hey, did you know that Martin Luther King Jr. used the word ‘negro’ fifteen times in his ‘I Have a Dream’ speech? He even positively cites a ‘negro spiritual’ at the end of it. Isn’t that interesting?”