The History of the Fasces:
Violence is Golden in American Iconography 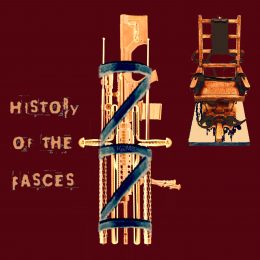 The fasces is believed to have been first used in the ancient Etruscan civilization, geographically located within the center of ancient Italy. A widely accepted theory has it that Rome was founded by the Italians following an Etruscan invasion; but even if it wasn’t, it is obvious that a great deal of Rome’s customs and institutions came directly from the Etruscans, anyway.

So one way or another, we know that the use of the fasces evolves out of the ancient Roman and Italian civilizations.

A study in 2013 found that the ancient Etruscans were indeed ancestral to the modern inhabitants of two regions of Italy, Casentino and Volterra. So when the Italian Fascists revived the symbol, they were indeed paying an authentic homage to their heritage.

This should make the presence of the fasces in American iconography all the more unusual, shouldn’t it?

Many different visible structures and icons of the United States government employ the emblem of the fasces in their design. Twelve large fasces line the Pennsylvania Avenue side of the Department of Justice building. They’re built into the designs lining the Supreme Court. They’re on so-called “mercury dimes” minted between 1916 and 1945 (with a gold centennial version re-released in 2016). They line the walls behind the front stage inside the U. S. House of Representatives. They’re on the insignia of the National Guard, the seal of the United States Courts Administrative Office, and appear on the base of the Statue of Freedom atop the United States Capitol. The Washington Monument even displays a statue of George Washington himself leaning on fasces. And this is only to cite a few such examples. 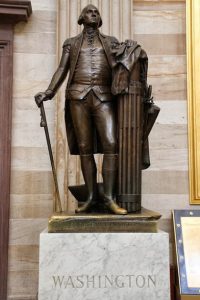 Even more awkwardly, many of these structures were built in the 1920s and 1930s—just when Mussolini was resurrecting the symbol to represent his political party in Italy.

As it turns out, none of this is even a coincidence.

Countless American statesmen of the time were quite openly admiring of Mussolini himself—including that prototypical hero of modern liberal progressives, Franklin D. Roosevelt.

In June 1933, as the Department of Justice building, which features many fasces, was being built, Roosevelt wrote in letters to the American ambassador in Rome that he was “much interested and deeply impressed by what [‘that admirable Italian gentleman’] has accomplished and by his restoring Italy and seeking to prevent general European trouble.”

He requested that his advisor, Harry Lloyd Hopkins, visit Italy to “look over the housing and social insurance schemes . . . [and] pick up some ideas . . .”

Andrew Mellon, the Secretary of the Treasury, worked openly for the Italian regime, negotiating a debt settlement program that reopened American investments into the country. By 1930, almost nine hundred million dollars had gone in. Mellon praised Mussolini as “a strong man with sound ideas and the force to make these ideas effective.” The Andrew W. Mellon Auditorium on Constitution Avenue is still today decorated with its original fasces, which were put there specifically to represent Mellon’s connection to the Italian regime. Most confusingly of all, for all the calls to remove so many different statues which pay homage to aspects of American history which liberals find unsavory, this has apparently never been protested.

The Italians collaborated with the National Socialists, of course, as some Americans likewise did. But they also ran their own concentration camps and labor camps (as, of course, Franklin D. Roosevelt himself also did). But most of these camps operated in places like Libya. So why didn’t the fasces fall into disrepute in the same overwhelming way that the swastika did? (((Hmmm . . .)))

Make no mistake: the original meaning of the fasces is violence. If there were ever an appropriate symbol to represent Jack Donovan’s idea that “violence is golden,” the fasces is it.

Sure. There’s a metaphorical element where the fasces represent strength through unity. While the wooden rods may all be weak individually, when brought together and bound by strips of leather, they’re unbreakable. It’s obvious why this would come to represent Right-wing forms of collectivism—the purpose of the kind of “unity” involved in the image of the fasces isn’t a bunch of people sitting around a campfire holding hands and being nice to each other, it’s strength. So the fasces works perfectly to represent the rejection of both liberalism and individualism in a single image.

But the literal meaning of the fasces in its historical usage was violence.

The custom employed in Ancient Rome, most likely adopted from the Etruscans, involved those who held the legal authority to punish criminals, who would carry the fasces in processions in order to signify their possession of that right and power. The wooden rods were also used to administer beatings as punishments for petty crimes.

An axe was fitted atop the bundle to represent the power to employ capital punishment in response to more serious, violent crimes. In other words, the fasces as it was actually used in history quite literally originated as a weapon, effectively comparable to something like a collection of police batons or firearms wrapped up with duct tape and displayed on an executioner’s chair.

That’s pretty hardcore. Even devoted White Nationalists would be nervous about using the kind of violent, authoritarian imagery presently in use on American currency, statues, and buildings.

From American Rennaisance, Jared Taylor’s What the Founders Really Thought About Race covers, well . . . what the founders of the United States really thought about race. Without spoiling the details, the obvious upshot is that our views are clearly far more in line with the American tradition than any of our critics’ are on, whether on the Left or the Right.

But it goes still beyond race.

The presence of the fasces in American symbology and architecture illustrates an even deeper presence of the values being resurrected and restored today by the movement of the New Right, which is truthfully embedded within the very heart of the American tradition itself.

If you have no idea what fascism as a political philosophy is—or was—besides some senseless craving for authoritarian violence for its own sheer, irrational sake—some who call themselves “fascists” buy this misinterpretation, just as many of their opponents do—then look forward to my eventual review of A. James Gregor’s Mussolini’s Intellectuals: Fascist Social and Political Thought, in which one of the leading experts on the subject aims to overturn this ludicrous line of interpretation within academia.

And in the meantime, pick up a copy for yourself. Gregor’s work is superb.

For those concerned about optics, there is absolutely no scarcity of indigenous imagery which we can employ in the United States to advance our cause, because our cause is really about the restoration of the authentic American tradition. And when the facts are properly seen and understood in this light, it should be clear there is absolutely no place between the New Right’s views and those of the Hard Left for any sort of milquetoast, polite “conservatism” to make any sense. Either you understand the legitimacy of someone like Roosevelt’s sympathies for the Fascist project, and you understand and sympathize with the views of the founders on race, or else you side with the Hard Left’s project of deconstructing the whole American tradition as a fascist, racist monstrosity of maniacal evil.

But it’s one or the other. There simply isn’t any coherent middle ground. 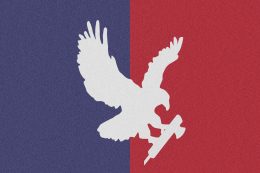 My submission for the unofficial flag of the North American New Right.