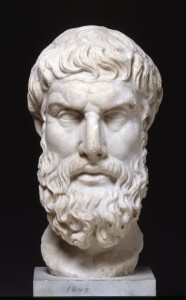 The following is drawn from Pierre Hadot, Qu’est-ce que la philosophie antique ? (Paris: Gallimard, 1995), 191-96. Some non-English secondary sources have been removed from Hadot’s footnotes. The title is editorial.

To achieve the healing of the soul and a life in accord with the fundamental [Epicurean] choice, it is not enough to have learned the Epicurean philosophical discourse. One must train oneself constantly. First one must meditate, that is to say intimately take in, to become intensely conscious of the fundamental doctrines:

Exercise yourself in these and related precepts day and night, both by yourself and with one who is like-minded; then never, either in waking or in dream, will you be disturbed, but will live as a god among men.

Accustom yourself to believing that death is nothing to us.[1]

The systematization of doctrines and their concentration in summaries and sentences are aimed precisely at making them more persuasive, more striking, and easier to remember, like the famous “quadruple cure” aimed at ensuring the soul’s health, in which the entire core of the Epicurean philosophical discourse is summarized:

But the reading of Epicurus or other school-masters’ doctrinal treatises can also nourish meditation and imprint upon the soul the fundamental intuition.

Especially one must practice the disciplining of desires, one must be able to content oneself with what is easy to obtain, with what meets the being’s fundamental needs, and to renounce what is superfluous. A simple formula, but which leads to a radical transformation of one’s life: to content oneself with simple foods, simple clothes, to renounce wealth, honors, and public office, to live a retired life.

These meditations and this asceticism cannot be practiced alone. As in the Platonic school, friendship is, in the Epicurean school, the means, the favored path, to achieve the transformation of oneself. Masters and students closely help one another to achieve the healing of their souls.[3] In this atmosphere of friendship, Epicurus himself takes on the role of director of consciences and, like Socrates and Plato, he knows well the therapeutic role of speech. This spiritual leadership is only meaningful in a one-to-one relationship: “I write this not for the many, but for you; each of us is enough of an audience for the other.”[4]

He notably knows that guilt tortures the moral conscience and that one can free oneself of this by admitting our failings and accepting reprimands, even if these sometimes cause a state of “contrition.”[5] Examination of conscience, confession, brotherly correction are indispensable exercises for succeeding in healing the soul. We possess fragments of a text by the Epicurean Philodemus entitled On Freedom of Speech. He deals with the confidence and openness which must reign between master and students, and between students. To express oneself freely is, for the master, to not be afraid to reproach others; for the student, it is to not hesitate to admit one’s failings or even to not be afraid make one’s friends aware of their own failings. One of the school’s main activities is then a corrective and pedagogical dialogue.

The figure of Epicurus played a leading role in this. Epicurus had himself established the principle: “Do everything as if Epicurus were watching you,”[6] and Epicureans echoed him saying: “We will obey Epicurus whose way of life we have chosen.”[7] It is perhaps because of this that the Epicureans gave so much importance to the portraits of their founder, who appeared not only in paintings, but also on rings.[8] To his disciples, Epicurus was like “a god among men,”[9] that is to say the incarnation of wisdom, the ideal to be imitated.

But in all this one had to avoid effort and tension. On the contrary, the fundamental Epicurean exercise consisted in relaxation, serenity, in the the art of enjoying the pleasures of the souls and the stable pleasures of the body. Firstly, the pleasure of knowledge: “In the study of philosophy, pleasure accompanies growing knowledge; for pleasure does not follow learning; rather, learning and pleasure advance side by side.”[10] The supreme pleasure is the contemplation of the universe’s infinity and the majesty of the gods.

The pleasure of discussion, as the dying Epicurus said in his letter to Idomeneus: “My continual sufferings from strangury and dysentery are so great that nothing could increase them; but I set above them all the gladness of mind at the memory of our philosophical conversations.”[11]

But also the pleasure of friendship. We have on this subject the testimony of Cicero:

Epicurus speaks thus: “That of all the things which wisdom has collected to enable man to live happily, nothing is more important, more influential, or more delightful than friendship.” Nor did he prove this assertion by words only, but still more by his life, and conduct, and actions. . . . But in one single house, and that a small one, what great crowds of friends did Epicurus collect, and how strong was the bond of affection that held them together![12]

The pleasure of a life in common which incidentally is not above having slaves and women participate. A genuine revolution, which implies a complete change of atmosphere, compared with the sublimated homosexuality of Plato’s school. Women, who were already exceptionally allowed in Plato’s school, now are part of the community and, among them, not only married women, like Themista, the wife of Leonteus of Lampsacus, but also courtesans, like Leontion (the Lioness), whom the painter Theorus would represent meditating.[13]

The pleasure finally of becoming aware of what is wondrous about existence. To be able to master one’s thought to preferably represent agreeable things to ourselves, to resurrect the memory of pleasures past, and to enjoy the pleasures of the present, by recognizing how much these present pleasures are great and pleasant, to deliberately choose relaxation and serenity, to live in a profound gratitude towards nature and the life which endlessly offers us, we know how to find them, pleasure and joy.

Death-meditation allows us to awaken in the soul an immense gratitude for the wondrous gift of existence: “Convince yourself that every new day will be your last. Then you will with gratitude receive every unhoped-for hour.”[14] “To receive, by recognizing its entire value, every moment of time which appears, as though this were an incredible blessing.”[15]

E. Hoffmann admirably identified the essence of the Epicurean life-choice when he wrote:

[2] Philodemus, in Papyrus Herculan, 1005, collection IV. [Translated from the French.]

[8] This is the theme B. Frischer’s book The Sculpted Word.