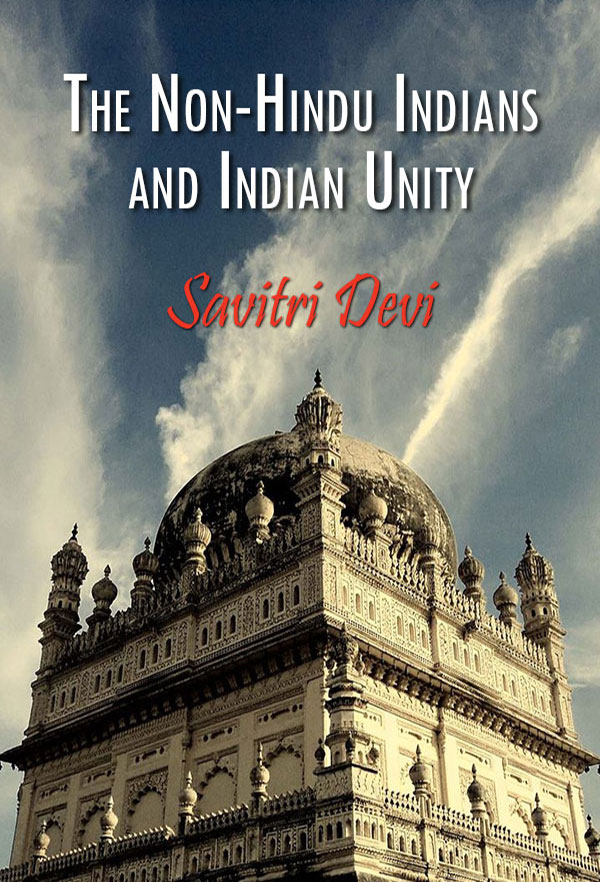 About The Non-Hindu Indians and Indian Unity:

Savitri Devi’s short 1940 book The Non-Hindu Indians and Indian Unity was written before India’s independence and partition into India and Pakistan. It is a sequel to her 1939 book A Warning to the Hindus, which was addressed to Hindus.

This volume is addressed in particular to Indian Muslims, although its arguments also apply to Indian Christians and Buddhists.

Savitri Devi sought to persuade Indians of all religious faiths to think of themselves as Indians first. She hoped to unify them within the framework of a secular but religiously tolerant form of nationalism. She argued that Hinduism in its primary sense is a civilization, not a religion, and that Hindu civilization is consistent with many different religious beliefs and practices—or none at all.

Within this framework, Savitri Devi argues that Hindus must be tolerant of non-Hindu Indians, as well as Hindus of different beliefs. She also argues that non-Hindu Indians can think of themselves as Indians first, because Indian civilization can embrace many different metaphysical and religious outlooks. She upholds Ataturk’s Turkey, Pahlavist Iran, and Imperial Japan as examples of non-Western societies in which religious differences have been subordinated to a higher nationalist consciousness.

Although Pakistan and Bangladesh are long gone, India still has hundreds of millions of Muslims and other non-Hindus, and the problem of national unity is still paramount. Hindu nationalism, moreover, has become associated with forms of militant Hindu religious fundamentalism. In this polarized atmosphere, Savitri Devi’s dream of a tolerant, secular Indian nationalism is more relevant . . . and more elusive . . . than ever.

Savitri Devi, 1905–1982 was born Maximine Julia Portaz in Lyons, France on 30 September 1905. She was of English, Greek, and Italian ancestry and described her nationality as “Indo-European.” She earned Master’s Degrees in philosophy and chemistry and a Ph.D. in philosophy from the University of Lyons.

Settling eventually in Calcutta, she worked for the Hindu nationalist movement, married a Bengali Brahmin, the pro-Axis publisher Asit Krishna Mukherji, and spied for the Japanese during World War II.

After World War II, Savitri Devi embarked upon an itinerant, ascetic life. Her two chief activities were tireless witness on behalf of National Socialism and caring for homeless and abused animals.

Savitri Devi influenced such leading figures of post-war National Socialism as George Lincoln Rockwell, Colin Jordan, William Pierce, and Miguel Serrano. In 1962, she took part in the Cotswolds camp, where the World Union of National Socialists (WUNS) was formed.

3. Religion, Politics, and National Culture: The Example of the Free Nations