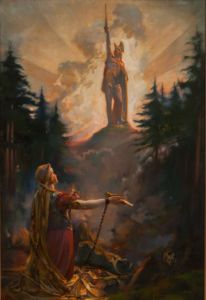 We are being buffeted by an unrelenting storm of chaos. The global economy lies in ruins, with leading stocks having shed as much as 80% of their value while European countries face the prospect of the lights going out this winter. A major conflict rages on the European periphery, ominously threatening to either drastically expand in scope or even to turn nuclear. And while these catastrophes engulf us, the West is being piloted by the most degenerated, inept, and decrepit political elite that ever could be imagined.

A natural response to this is to feel an overwhelming sense of dismay and powerlessness — to batten down the hatches and to try to insulate ourselves from the worst of it. It is easy to believe this is simply an age to be endured, and that our immediate goal can only be narrowly trying to survive. But this type of thinking discounts an important truth: chaos is good for us. This is the greatest opportunity in a generation to influence the course of world events.

There is a pernicious belief amongst the radical Right that our enemies are all-powerful and monolithic; that we are ruled over by an infallible cabal of psychopaths, always unleashing the next stage of their devious machinations on a helpless and impotent public. The reality is much more nuanced than this. It is plain to see that many of the forces the global elites have unleashed are now beyond their control. We are all hostages on a runaway train with no breaks. Our opponents are neither unflinchingly unified nor unswervingly capable, but rather subject to the same whims of fortune as us. And they are rapidly losing their grip on their most powerful levers of control: safety and prosperity. The vast majority of those who have acquiesced in the global liberal order have not done so out of a deep-seated ideological belief in it; rather, they turn a blind eye to its excesses because the system has benefitted them materially, and it has kept them in comfortable gilded cages. This is abruptly about to come to an end.

A drastic decline in real terms of living standards will do more to make people receptive to our ideas than a thousand speeches or essays. We are already seeing this. The times are not even yet as bad as they will be, and populist parties are gaining unprecedented shares of the vote from Italy to Sweden. It is not that these parties will solve our problems; in fact, they will most likely fail to make any meaningful difference at all. But they are a proof of the concept, specifically a public admission that the masses are already open to radical new ideas on how to reshape society.

The Overton window has not just been shifted, it has been shattered completely. At every turn we must be there to offer our solutions and to shine a spotlight on the guilty parties. Up until now, we have been too willing to compromise, and we have lagged slavishly behind the populist trailblazing of others, hoping a moderate approach can prevail. We must at this moment undergo a process of re-radicalisation. We are not here for the purposes of infotainment or grifting, but to form the intellectual vanguard of a revolutionary movement that can save our nations and our people.

And yet many of us are tired: numbed by past failures, disheartened that all our struggle and sacrifice seems to have scarcely moved the needle one iota in our favour. The daily demoralization propaganda is doing its work, and in the coming age of austerity the kneejerk reaction will be to focus only on what we can control, to scale down our commitments both financial and mental to abstract political struggle. Yet, it is exactly at this moment that support is most vital. When the fighting is the thickest, that is when the battle will be decided. Though we are weary, we must summon our remaining energy to brace the shield wall once again. Instead of turning inwards, it is now time for us to step from the shadows. Just as in the dense and murky Teutoburg Forest the Germanic chieftain Arminius ambushed and destroyed a complacent and unsuspecting Roman army, we must too spring our trap.

It is of course not feasible for everyone to cast their personal responsibilities to the wind and commit themselves completely to radical politics, nor is this desirable. But what all reading these words can do now is to help arm the political gladiators, and to act as nodes in this great network dedicated to reordering society. Every time you donate to Counter-Currents, each time you share a dissident video, every instance where you speak the truth to friends, family, and those who are open to our message, you bring us one step closer to victory. Chaos by itself will not guarantee the adoption of our ideas. The fact that what we are saying is right is irrelevant. There is no Marxist inevitability of triumph inborne in our Weltanschauung. In fact, we have only a slim hope of success, but from small stones comes a landslide, and now is the time when our efforts will be magnified and rewarded. Vote for the future you want to bring into being with your time and your money. If it is not possible for you to take to the field of battle, then at the very least you must empower those engaged in the struggle to succeed.

We must bolster our institutions and our ideological program to prevail. Throwing a wrench in the slaughterhouse our enemies have constructed for us grants us only a temporary reprieve if we have nothing to replace it with. The final collapse of rotten foundations and a warped establishment is a hollow victory if we do not manage to fill the resulting vacuum. This may happen sooner rather than later. All totalitarian systems of thought control seem suffocatingly all-encompassing and eternal until people suddenly stop believing that they are. The dissolution of the Soviet Union, the collapse of the Ceausescu regime, and a dozen other examples demonstrate how quickly the political winds can change. This lends our task of creating a parallel system of thought for elite individuals a sense of urgency. We must imagine and advertise an entirely new world, and do so quickly.

National revival begins with personal resurrection. Before we can change the world, we must first change ourselves. By growing your personal power, by marshalling your strength, by expanding your resources, you are augmenting the great fasces that is our race. You are acting as a gatherer contributing to the greater well-being of your tribe; you are an engineer in the colossal arms factory that is providing the intellectual shells and bullets which will blow apart our enemies’ lies.

In the afterglow of their Black Lives Matter and Covid tyranny, our overlords think they have successfully cowed the population. But just as the Romans’ hubris led them to fail to detect that Arminius’ loyalty was to his own people and not to their system, our elites will make the same miscalculation.

We have been sharpening our swords in the woods for years, waiting for our moment to strike. Now is the moment to not only awaken Arminius, but instead to prove that we have hundreds of thousands of him. The world is in chaos, and it is ours for the taking — if only we have the will to seize it.