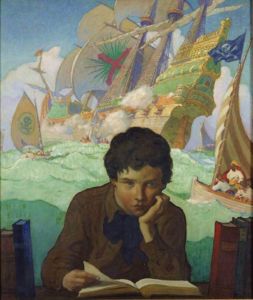 There is a natural tendency on the Right to view the act of reading as a purely utilitarian endeavor. In the hierarchy of human activities, reading is accorded greater status because reading was traditionally the hegemonic mode of transmitting scientific discoveries, lofty philosophical ideas, and arcane theological refinements. This purely mechanistic view of treating the written word as solely a vehicle for informational exchange overlooks its transcendental and transformative power. We read not only to learn, but to stoke our imagination.

Modern Western civilization has an abundance of material means, but a complete paucity of imagination. While other cultures have ossified and perished, Europeans have continually reimagined and reinvented themselves. We are natural dreamers, always in search of new dreams to dream.

With that in mind, I have chosen five novels for young nationalists that not only deal with perennial Rightist themes such as self-reliance, overcoming struggle and hardship, and identity, but which also have a heavy focus on introspection and the universe of the mind. For the generations to come, developing the creative faculty will be of paramount importance, both to imagine the world that was and to delineate a world that could be as the real, extant world continues to decay.

Knut Hamsun, Growth of the Soil

Every downtrodden office worker and societal malcontent has idly dreamt of escaping to a cabin in the wilderness, but no novel has so vividly painted a vision of how such a life could be. The Western pioneer spirit is set loose in the wilds of Norway in Knut Hamsun’s tale of a man carving out a life and a familial dynasty while contending against poverty and the pitiless, frigid wilderness. Hamsun charts the rise of Isak from a lonely, penniless drifter battling with the elements to a married burgher and pillar of the community. The antagonists of his bucolic saga are human greed, the ever-present corrosive influence of small-town envy, and petty bourgeois material pretentions.

It is in the final pages of the novel where Hamsun truly lays out his manifesto for an agrarian Blut und Boden return to the land, decrying rootless propagators of industrial society and exploitative capitalism.

Robert E. Howard’s Conan the Barbarian is arguably the progenitor of the modern fantasy genre, predating the work of J. R. R. Tolkien by several years. The hypermasculine themes of violence and adventure in Conan have spawned a host of imitators, but William King’s Slayer series is a more than worthy spiritual successor. If every young boy at some stage wants to be Conan, then every adolescent eventually realizes that Conan, too, must have had an inner life of fears and doubts. That’s where William King’s Slayer series stands out: taking the visceral action and raw violence of Conan and pairing it with an introspective, grounded narrator, drawing on the huge lore and world-building of the Warhammer universe.

Alienation is perhaps the only sane response to modern society’s monstrous nature, and the result of alienation is an intense, introspective soul searching. Hesse is a master of the human psyche, using his narrative to pose difficult questions without offering definitive answers. The entire book is a demolition of consciousness, blurring the lines between life and death, reality and delusions, and the concepts of right and wrong. These are all metaphysical themes that we must meditate on, and as we join down-and-out Harry Haller on his aimless strolls through hazy nights, the unavoidable existential conundrums are macabrely and alluringly framed.

There is an undeniable sense of the German spirit in Hesse’s work, including Harry’s dialogues with legendary German author Goethe.

In the not-so-distant past, the topic of masculinity was not one that warranted dissection; it was simply practiced, not theorized. Yet, modern society has so thoroughly deconstructed gender and displaced the traditional role of men that a reaction was inevitable. Fight Club is an explosive critique of the emasculated and domesticated modern male, and the consumerism and corporate subservience that has sublimated his natural instincts. At its heart, Fight Club explores both the physical and mental experience of manhood; the physical capacity for violence and risk-taking, and the immense loss of those who have been figuratively and literally castrated by modernity. The fighting and the struggle depicted in the novel is an allegory for the transformational pains of confronting masculinity’s central questions: Could I be better, stronger, braver? It correctly identifies that our war is indeed a spiritual one, waged in the confines of a vacuous consumer society.

Robert A. Heinlein, The Moon is a Harsh Mistress

A reluctant revolutionary planning an uprising against an authoritarian society managed by a sentient artificial intelligence more powerful than its creators ever conceived is certainly a synopsis that has distinctly modern parallels, despite Heinlein penning his work in the 1960s. His descriptions of a degraded and criminal lunar society rife with polyamory, incoherent ethnic groups, and incomprehensible totalitarian diktats can only resonate with the contemporary reader. What is the probability for the success of a revolution in such a nihilistic and dystopian future? What would one even look like? This book is indispensable reading for all those seeking to change the nature of our world.

» Decision Before Dawn: The Good German