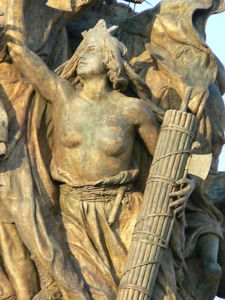 “LARPing” is short for live-action role playing, but in the political sphere it does not literally mean playing some sort of role-playing game; rather, that participating in life and politics in an unrealistic way that could only bear fruit in an idyllic fantasy. LARPing tends to be associated with weapons, prepping, and survivalism.

Over the years, any semblance of realism in these fields has eroded into a true and utter “LARP.” In the 1970s through the ‘90s, the militia movement was less of a LARP, and yet the little LARPing they did led to their complete demise, as it eventually translated among disturbed individuals into real-life acts of violence.

Today things are much worse. Unlike the old baby boomer radical Right, we are only now just rebuilding a movement that has remained completely disorganized for decades. This is partly due to the LARPing problem. Rather than spending time infiltrating local GOP nodes, becoming pillars of the community, and organizing, most Right-wingers are more comfortable shooting at targets and grumbling about a “without rule of law” scenario.

Not only is this militarization fantasy largely not useful to our cause, it is often counter-productive. The old radical Right of the last century were all the things I described: influential, active, and organized. But they were also LARPers. Because of their militarism and training camps, they were easy targets for the Jewish-controlled legal system, which was able to crack down and send them all to prison in the worst-case scenarios, or simply use Jewish private law NGOs to sue them over nothing — and win — in the best cases.

I am not the first person who has remarked that Right-wing politics and firearms should never be mixed. Furthermore, anything regarding firearms should never be broadcast as the Rightists of old did by allowing news crews to check out their compounds. A quick glimpse at how the post-Charlottesville civil trials went has shown that some have still not learned any of these lessons.

So, if playing with guns in the woods isn’t the solution (shocker!), then what is? The truth is dependent on what we believe the problem to be. Is the question how to save Western civilization (or in my case, simply America)? If so, it should have become clear after decades of no solutions that there is indeed no solution to saving much of our civilization. The United States as we historically conceived it will fall; perhaps the history books of the future will say that it already has. Sadly, many European countries will fall as well. But if the question is, how does the good that is embodied by the falling West — its blood, its culture, its spirit — live on, then there is a more achievable task.

To LARP is to pretend one has more power than one has. The sheer amount of power that the revolutionaries of yore had prior to their revolutions is impossible to imagine for a Right-winger today. Lenin had immense resources at his disposal, and was facing a government which had lost legitimacy in the midst of the greatest war in human history. Hitler had a massive political party and an active paramilitary force backed by the old German legal system behind him. Franco could rely on the power of the Spanish military’s most elite units and the Catholic Church. For his part, Pinochet had the military, the legal system, and Western backing. The list goes on and on.

The point is that all this talk about revolution and fighting the government is moot if you aren’t certain that you will win, and if you are willing to die in the process. If you feel that there is even a hint that your bid to take power will not succeed, it’s because this is actually the case. For example, the recent Turkish coup attempt was uncertain of itself and only happened because of the desperation of some Kemalist generals. We are weak; there is no denying that. Rather than flexing muscles we don’t have, it is time to grow those political muscles — a task that will be the main responsibility of the true Right wing over the course of the 2020s as the United States and many Western countries become unrecognizable.

If there are three words you should take from this and translate into your political life, they are: organize, organize, and organize. There is no more important task. The Left does not possess physical strength, they aren’t particularly intelligent, and they don’t have much going for them even when it comes to entrepreneurialism. But what they do have is organization, which has allowed them to seize martial strength, legal strength, intellectual strength, and monetary strength by proxy. Humans are a species that derives strength from living in tribes. Individualism is the ultimate cancer on strength. One of us, even the strongest, is merely a twig, but together we are the powerful fasces.

Organization is not merely political. Not only have we been forced with the task of rebuilding a genuine Right-wing movement, but perhaps even more importantly we are also tasked with rebuilding community itself from the ashes of the post-‘60s cultural revolution and its perpetuation through the technological revolution of the Internet and smartphones. It was second nature to build political community out of community itself, but it is neigh impossible to build political community without community. I am reminded of the people in Northern Ireland who actively helped IRA members during firefights, aiding in their escape by making distracting sounds with trash bins. It is no wonder that the powers-that-be destroyed community before establishing their total state.

Any move made directly against the government, whatever government that may be, will be fruitless due to the latter’s sheer power and resources. You are not John Connor; you’re just a man doing his best. So do your best. Aiming above what is possible will result in tragedy, while aiming for what you can reasonably accomplish will elevate you to a position to be able to aim higher. LARPing is a useless safety blanket; a cope for an unpleasant reality. The time for LARPing is over.

It’s time to prepare. Prepare for what exactly? We have some general ideas as to what we wish to accomplish, but the specifics are still in the making. Through culture and community, not simply crass and profane politics, I am certain we will soon sharpen this idea. To do one’s best is to elevate, and to elevate is to prepare.