Ask A. Wyatt Nationalist Is it Rational for Blacks to Distrust Whites? 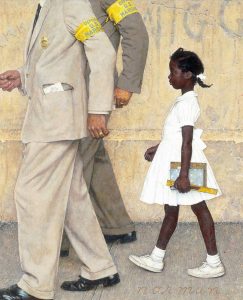 Today’s reader question was stated in a complex way, but as I understand it, it boils down to this: Is it rational for blacks to distrust whites? To which my answer is: yes, absolutely.

Why is this important? If blacks and whites are to live together in a workable society, they have to be able to trust one another. For instance, people of a classical liberal bent believe that a workable multiracial society is possible if people act as individuals and follow their rational self-interest. But this model fails if blacks have good reasons not to trust and cooperate with whites.

How do we understand and trust people of different races? We can’t read their minds. So we have to listen to what they say and observe what they do. Based on what white people say and do, do blacks have a rational basis for trust and cooperation? The answer is no.

Some white people genuinely like blacks and treat them decently. An astonishing number of ordinary white people have the gut conviction that, as far as blacks are concerned, they are good, well-meaning, and trustworthy people.

But some of these nice white people quite freely condemn other whites as incorrigible anti-black racists. Sometimes, it is even true. Beyond that, some whites quite candidly declare that they dislike blacks. Between the whites who admit to being racist and the whites who condemn the racism of their fellow whites, blacks have ample reason to think that a significant number of white people bear them ill will and are thus not to be trusted.

Slavery ended a long time ago, but white supremacist laws were on the books in the United States within the lifetimes of many who are reading this essay. Leopards can’t change their spots, but humans can change their minds. Few people today admit to being racists. But do people really change that fast? And is it prudent to assume that they have changed when something important is at stake?

Since it is not possible to tell good whites and bad whites apart simply at a glance, it is not rational for blacks to trust any whites—not even the whites who say they like blacks. After all, if white people are bad enough to hate blacks, aren’t they also bad enough to lie about it? Even as explicit forms of racism and white supremacy have disappeared, don’t white people say that blacks are still victimized by increasingly subtle and occult forms of implicit racism? Sure, racist macroaggressions like lynching are a thing of the past. But what about microaggressions so small that only experts can discern them? Don’t nice white people like Robin Diangelo tell us that even nice white people like her are guilty of racism? Don’t white experts now say that whites need not think bad thoughts about other races to be a racist? It is merely enough for whites to exist to be racist. Blacks who internalize this message would be crazy to trust white people.

Nor is it rational for blacks to undertake the risks of trying to turn white strangers into white friends. Extending the hand of friendship always entails some risks. Taking that risk is only rational on the assumption that others are basically trustworthy and well-disposed toward you. But that assumption is precisely what is lacking between blacks and whites. So it is not rational for blacks to risk befriending whites, especially when it is far less risky to befriend their own kind.

Therefore, trusting whites, which is the foundation of any workable multiracial society, is simply not in the rational self-interest of blacks. 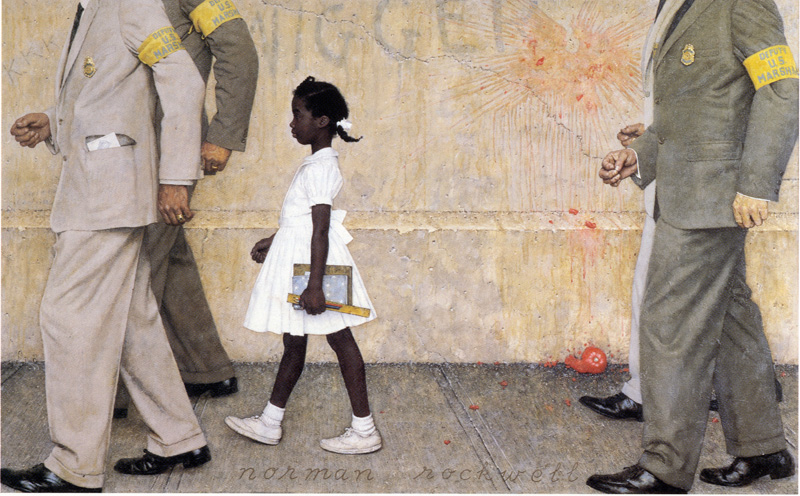 Norman Rockwell, The Problem we All Live With, 1963

This argument is bound to provoke angry denials from white liberals and libertarians, who believe that a multiracial society really is workable. It is likely to spur them to new attempts to demonstrate their good will toward blacks, unlike those bad white people.

Such protestations are likely to be popular with blacks, because they usually involve free stuff, but they are also likely to be futile for two main reasons.

Second, offering mistrustful blacks free stuff is self-defeating. It simply rewards them for being sullen, hostile, and suspicious, so why would they change their behavior? As long as whites are willing to pay blacks to establish their good will, blacks have massive economic incentives to dig up old grievances and invent new ones. Beyond that, nice white people have created a system in which blacks are babied, pandered to, placed above criticism, and literally allowed to get away with murder. Such a system gives free rein to blacks’ worst impulses. It would make even the best of people into monsters.

White liberals believe, however, that after decades of soul-corrupting privilege and highly incentivized grievance mongering, blacks will become virtuous, open-hearted, trusting people like themselves. They’ll decide to give up their racial privileges and lucrative rackets. They’ll magnanimously descend from their pedestal. Then they’ll finally be white people’s equals.

I really see no way around this problem. White racists and white anti-racists alike announce to blacks that a significant number of whites bear ill-will toward blacks. Thus it is simply not rational for blacks to trust and cooperate with any given white stranger.

« Counter-Currents Radio Podcast No. 472 Hwitgeard on The Writers’ Bloc