Possible Noose Rumored to Be Found Near Suspected CIA Facility 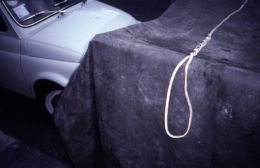 The CIA is extremely upset that a noose was found near one of their facilities, since inclusiveness and safety has always been their main priority.

On Monday, The New York Times published what may be the vaguest and most indistinct “news” article in world history. Titled “C.I.A. Director Issues Warning After Possible Noose Is Found Near Facility,” it hints and alleges and tiptoes around the idea that an object that “appeared to be a noose” — and which may therefore constitute a racist threat against the Central Intelligence Agency — was discovered “outside” of a “secret facility used by the agency in Virginia”:

Questions surround the incident. The object was found near a small agency facility located in a building that houses businesses and other organizations. Some people briefed on the incident said it was not entirely clear that the object was even meant to be a noose, or if whoever placed it there knew that the C.I.A. secretly operated in the building.

One would think that the CIA, being the CIA and all, would already have far more information about the alleged incident than the little puffball of informational nothingness they tossed at the media, but CIA Director William J. Burns was apparently so concerned about this perceived threat to the agency’s commitment to racial equity that he “issued a warning to the agency’s work force last week.” The Times did not reveal the substance of the warning, but I assume it was something in the vein of, “Please don’t lynch the Negroes.”

CIA Press Secretary Susan Buikema-Miller released the following stern admonition to whomever it was that may or may not have placed what was or was not a noose somewhere near what no one but CIA members know is a super-secret facility for the lavishly-funded and preposterously secretive agency:

C.I.A. has zero tolerance for actions or symbols of hatred and treats any such incidents with the utmost seriousness. Our values and our vital national security mission demand that we uphold nothing less than the highest standards of inclusiveness and safety.

Although more than a quarter of the estimated 4,743 lynchings committed in the United States between 1882 and 1968 were of white people, the very sight of any kind of knotted rope device triggers understandable terror and agony among black Americans in the same way that water hoses, German shepherds, and police cars give them the heebie-jeebies.

The cynics among us may note in their inimitably bratty way that there have been so many deliberate and accidental hate panics caused by the sight of knotted rope devices over the past couple decades that this may be another full-on hoax in the vein of this one or this one or this one or this one — in which various mendacious Americans of Blackness either placed rope nooses or drew pictures of nooses in the apparent hopes that they could cultivate sympathy, garner attention, and amplify anti-white hatred. Or maybe it was the result of mass racial psychosis in which people brainwashed to see Klansmen lurking behind every tree mistake “remnants of paper lanterns,” a nylon parachute cord, and a “packaged leather shoelace” for nooses. Or maybe it was similar to the 2018 incident at the Mississippi State Capitol where numerous nooses and “hate signs” were left hanging from trees by anti-racist activists to illustrate that it’s immoral to leave numerous nooses and “hate signs” hanging from trees.

Of all those options, and at the risk of being placed in a dark, cramped, moldy mind-control torture chamber for the rest of my life, I’m leaning toward the idea that if there was a noose-like object placed anywhere near a rumored CIA facility at all, it was placed by benevolent CIA operatives to foster inclusiveness and safety by unnecessarily stirring up even more racial animosity in a nation that is already foaming-at-the-mouth rabid with racial animus.

The Central Intelligence Agency, just like corporate America and almost the entire American educational system, has plunged balls-deep into woke orthodoxy. As Glenn Greenwald noted in a brilliant 2015 essay, the United States routinely generates pro-war propaganda under the guise of protecting gays and women in enemy states such as Afghanistan while it looks the other way when a “friendly” nation such as Saudi Arabia treats its bitches and fags far worse: “Support for Western aggression and policies of imperialism is now manufactured by parading them under the emotionally manipulative banners of progressive social causes.”

Last year, the Office of the Director of National Intelligence issued a report lamenting the fact that only 12.3% of civilian employees in US intelligence agencies were black, despite the fact that blacks comprise a robust 12.4% of the overall population. The report wailed, gnashed its teeth, and rended its garments at the fact that at senior pay levels, blacks only filled 6.5% of the positions, when everyone realizes that blacks are just as qualified, and probably far more qualified, than whites in matters of intelligence.

Also last year, the CIA faced a mild wave of scorn after releasing a series of promotional videos under the rubric “Humans of CIA,” a recruiting campaign that aims to encourage all manner of non-whites and non-males to apply for positions in which the fate of the nation rests in their possibly spiteful and vengeance-seeking hands. This video features a 36-year-old Latina CIA agent wearing a very professional and serious-looking pink woman’s power fist T-shirt and talking about how her role in the CIA will not impede the fact that she joyously identifies as nearly everything except a patriotic American:

I am a woman of color. I am a mom. I am a cisgender millennial who has been diagnosed with generalized anxiety disorder. I am intersectional, but my existence is not a box-checking exercise. . . . I used to struggle with imposter syndrome, but at age 36 I refuse to internalize misguided patriarchal ideas of what a woman can or should be. I am tired of feeling like I’m supposed to apologize for the space I occupy rather than intoxicate people with my effort, my brilliance. I am proud of me, full stop.

The CIA has a long and unblemished track record of fighting racial hatred. It’s not as if they recruited ex-Nazis in programs such as Operation Paperclip and Operation Bloodstone. It’s not as if they used the Vietnam War as a proxy for exploiting the “Golden Triangle” to cultivate heroin and fund covert operations. It’s not as if the Iran-Contra affair was used to run guns to rebel groups in Central America and to inundate America’s cities with crack cocaine.

Since its founding in the aftermath of the Second World War, the CIA has an unblemished record of honoring human dignity in all of its manifestations. Whether waterboarding suspected terrorists at Guantanamo Bay, enabling Central American death squads, experimenting on unwitting subjects with LSD, assassinating foreign leaders, overthrowing democratically-elected governments, or issuing torture manuals that encourage such severe sensory deprivation that they “induce psychological regression in the subject by bringing a superior outside force to bear on his will to resist,” the CIA’s mission has always been to insure inclusiveness and safety. Its main goal has never been raw, psychotic, naked power for those who own the US government and direct world affairs, and anyone who suggests such a thing is clearly a terrorist who deserves to be driven to the point where they are drooling, incontinent, and can’t even remember their own name.

This is the same CIA that sponsored Operation Mockingbird and fed propaganda to hundreds of major media outlets to the point where former CIA director William Colby boasted, “The CIA owns anyone of any significance in the major media.”

Clearly, we can trust anything the CIA tells us. When they say that maybe something that kind of looked like a noose was perchance spotted in the vicinity of somewhere that the CIA potentially has an office, we are to take this as evidence that white-supremacist terrorism, rather than demoralizing disinformation campaigns in which we pay our government our hard-earned tax dollars to gaslight us until the day we die, is the biggest threat currently facing us as a nation.

As Martin Luther King so sagely reminded us, the arc of the moral universe is long, but it bends to the point where Allen Dulles transitions into Jussie Smollett.

« Game of Thrones: The Race to Run Britain