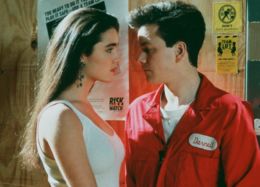 We’ve all seen sci-fi movies where an attractive woman gets stuck alone with a guy she normally wouldn’t consider, gets to know “the real him,” something threatens her, he rescues or protects her, and they pair up in the end. For example, in Star Wars: The Empire Strikes Back, the scoundrel smuggler Han Solo wins over Princess Leia while they were stuck in outer space together in the Millennium Falcon.

A non-sci-fi movie like this is Career Opportunities, which concerns a night janitor at a 1989 Target retail store and a beautiful rich girl who get locked inside overnight together. He’s there for work, and she’s there to fake running away from home to act out against her overbearing father. The two went to high school together, but of course never dated, let alone spoke to each other. Of course, she gets to know the “real him” as they roller skate around the Target aisles and have dinner together. Little do they know, but thieves are also in the building. They hold the two hostage, but of course, the night janitor fends them off and saves the day, and the film ends with him and the rich girl in a car together, now a couple.

Career Opportunities and Star Wars depict male fantasies of narrowing the playing field down to one and rescuing a damsel in distress. An even more pronounced male fantasy is Vincent Gallo’s Buffalo 66, where a man kidnaps a young woman, and perhaps through some sort of Stockholm syndrome she ends up liking him. Critics, of course, didn’t hesitate to call it a male fantasy, but at least in male fantasy stories the sexual market clears, so to speak, and a man and woman pair up.

YouTuber Diana Dark Angel took footage from the Target date in Career Opportunities and combined it with electropop music maker Mr.Kitty’s most popular single, After Dark, a retro 1980s synthwave piece which sort of fits the atmosphere of a Target store from 1989. The idea of two young adults transforming an otherwise boring big-box store into a fun first date is heartwarming. It’s proof that what matters is what’s inside rather than one’s position in society. In other words, the real heat comes from within and not from one’s surroundings.

The most popular comment regarding Diana Dark Angel’s video is, “This song makes me feel nostalgic for something that never happened.” A lot of millennials and zoomers who have fallen prey to the Singles Epidemic probably feel the same way. The experiences they should have had, never happened.

The question is, could a night janitor like the one in Career Opportunities ever really get a woman like Jennifer Connelly? He could also win a billion-dollar Power Ball lottery, but the odds aren’t in his favor.

The first is when an average-looking rich girl chooses a less wealthy man who is psychopathic. Women tend to be attracted to psychopathic men. One study showed that the more psychopathic traits a man has, the more highly women rate video of him. These psychopathic men also often have genetic ancestry closer to that of the mean of British people, which women interpret as a form of ethnic hypergamy.

The second is when a beautiful rich girl realizes it’s difficult to find a man of similar means and looks for a way to “marry up” in other ways. This can be good because she then chooses a man more for his innate qualities, which in my opinion are a better reflection of a man’s genetic worth than his wealth. For example, Jessica Simpson, who is worth $200 million, married former NFL football player and Yale graduate Eric Johnson, who is only worth $10 million. Johnson is a tall, intelligent, tough, relatively handsome man who she claims is nice to be around. She chose to marry him for his innate qualities rather than his money. Most of the time, these relationships form in high school or college before women start looking at a man’s money, but Simpson and Johnson are proof it can happen after graduation.

In contrast to Simpson, when most female celebrities move up in wealth and status, they dump their boyfriend who shared their previous status level and find men of similar or better means. The relationship histories of Demi Moore, Jennifer Lopez, and Angelina Jolie seem to reflect this trend.

Because women marry up in terms of wealth and income more than they marry down, there will always be leftover poor men and rich women. Women such as Jessica Simpson who bridge the gap by looking at genetic quality rather than wealth are doing the white race a favor. 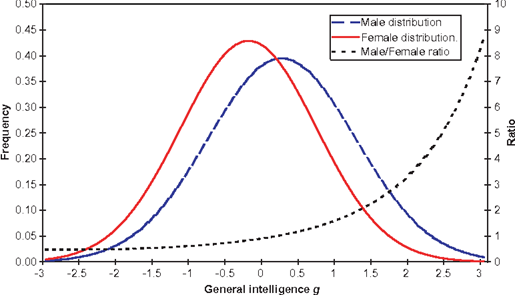 Men and women pair up assortatively according to IQ. One study found the correlation to be 0.40. Because the bell curve distribution of men’s IQ is more widely dispersed than that of women, and because men have higher IQ on average (see graph), there are significantly more men who are outliers in having high IQ. As a result, there are about double the number of men in Mensa than women. Contrary to what popular YouTuber psychologist Todd Grande says about Mensa IQ tests being nothing but narcissism tests, since he claims they one can score highly with practice or with the right psychologist as administrator (by the way, narcissism is higher among men), men don’t exhibit any status-seeking surpluses with respect to educational degrees. Women are set to begin receiving 60% of Bachelor’s degrees within several years, so if they seek status in degrees more than men do, they probably don’t take Mensa tests significantly less often than men do per IQ level.

In the graph, Nyborg has triple the number of men at Mensa level or a standard deviation of two (as reflected by the dotted line corresponding to the right-hand axis titled “ratio”), but the real figure is double the number, so either women are likelier to take the Mensa test per their IQ level or Nyborg is understating female intelligence, or it’s a mixture of both. Regardless, a man of 1.5 standard deviations above the male mean has as few as half the number of women at his IQ level that a man who is 0.5 IQ points above the mean, or an IQ of 108 has. While it is a sin to covet thy neighbor’s wife, one must wonder whether it is a sin to covet thy neighbor’s “sexy” mediocre IQ as smarter men get left out in the cold more often, assuming a perfect correlation of assortative mating.

If people pair up assortatively according to IQ, there will always be leftover average IQ women and high IQ men. The good news is that relationship satisfaction is not correlated with IQ similarity, so bridging the IQ gap doesn’t make for worse relationships. Men who insist women share their intellectual interests in, say, quantum physics or philosophy may succeed in finding such women. For example, Jennifer Connelly has a high IQ and likes these things, but there aren’t enough of these women to go around. What’s more, Connelly is half Jewish, and Ashkenazi Jews are more intelligent on average and thus more likely to share such interests. It seems common among white men who have a high IQ to get with a Jewish woman because, per capita, they have higher IQ levels. The obverse of this seems to occur when white women marry high-status, rich Jewish men. It’s tough to say whether more gentile women go with Jewish men or Jewish women with gentile men, but it’s probably close to 50/50 since the market is bound to clear — or least used to be, when about 80-90% of the population paired up. The question is whether Jewish women are more tolerant of intelligence than gentile women like to marry rich guys.

Even if a woman is just as intelligent as a man or even more intelligent than he is, women are somewhat less intellectual than men on average, so she is less likely to have equal enthusiasm for intellectual interests. Men who demand a woman share their intellectual interests need to get over themselves and learn how to communicate with the rest of the race. After all, when he was a child he didn’t have those interests, so it’s self-contradictory to demand that anyone to whom he’s close must have them, including his girlfriend or wife. Intellectual similarity isn’t very important, because most of the time the man will spend with the woman is when she is with their kids, and lectures on dark matter or analytic versus Continental philosophy won’t be in order then.

Plus, men and women have the same proportion of genes associated with high IQ in their gender-specific population-wide genomes. It’s just that men get to capitalize on the phenotype better. In other words, the sexes have the same aggregate IQ but it manifests differently on an individual level. Genetically, women are just as smart as men, but also just as bad in ways that men are bad — they are just as psychopathic, criminal, and so on.

Finally, white people breed best at an IQ of around 100. This is regrettable in my opinion, as I would like to see the average be 120, but unfortunately having an IQ significantly above that level makes it possible to be “too smart for one’s own good,” according to many people and especially the lower half of the current white bell curve. According to one study, average attractiveness allegedly peaks at an IQ of 120 but declines as IQ increases above 120. (Maybe assortative mating has something to do with that.) The reality is that whites have not evolved to reproduce at an IQ significantly above 120, at least not with our current instincts, and when someone with an IQ significantly above 120 marries down in terms of intelligence, it is probably a win for their genes. What’s more, while very intelligent men may be more likely to be single, making that an intellectual status symbol is dysgenic.

Men who can’t find the right socially acceptable opening to hit on a girl should hit on her anyway, even if it’s necessary to be awkward. Pretty women often naturally bring out the wit in men, so the main thing is simply to approach her. Don’t worry about offending her less attractive friends, because they have no right to prevent her from getting the guy she deserves. Approaching a woman awkwardly probably won’t succeed, but the odds are better than if one doesn’t approach her at all. It is irrational to believe that indefinite inaction is somehow preferable to immediate action. After all, men in the primitive Hadza hunter-gatherer society cover more ground than women, and thus action seems to benefit men going back deep into human evolutionary history, so one should always err on the side of action over inaction, because fortune favors the bold — even awkward boldness as against the prim and proper wallflower.