Cryptocurrency: A Faustian Solution to a Faustian Problem 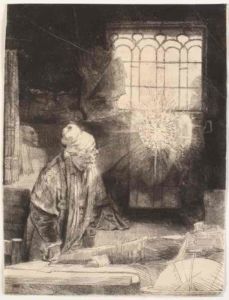 Modern economics are in large part defined by the premise that infinite growth is both possible and desirable — if not always in theory, then at least in how most major economic actors behave. The green line should always go up — at least in the long term. If one takes a step back, this is unrealistic. Even if we could create ever more producers and consumers and make them ever more efficient, there is a limited amount of resources: food, land, rare metals, oil, and so on.

This instinct toward infinite growth is indicative of the burnt-out Faustian yearning for infinity taken to an unhealthy extreme. It is not viable and leads to massive market bubbles followed by inevitable busts. The modern economy is like the seasons in the world of Game of Thrones: the longer the summer, the longer the winter. It is also akin to the boom-and-bust towns of the Wild West, leading to the hollowing out parts of America and rendering them modern ghost towns. Instead of poignant ruins, we are left with strip malls inhabited by shambling drug addicts.

There is a solution in cryptocurrency, however. While cryptocurrency is in its essence entirely Faustian, the impulse behind its mass adoption could be the stirrings of a nascent world-feeling of a new cultural cycle. In a previous article I dubbed this hypothetical new culture the Spenglerian culture, as its world-feeling is based on a sense of time as being cyclical or seasonal. Like the ouroboros snake eating its own tail, this uniquely Faustian means turns the Faustian impulse against itself in service of Spenglerian ends. There is nothing infinite about cryptocurrency, in stark contrast to the infinite growth and boom and bust of Faustian economics. As explained by Karl Thorburn in his recent article, there is a hard limit of 21 million in mineable Bitcoins, which is the most popular cryptocurrency — and unlike even gold, it is impossible to mine more.

Cryptocurrency in its technological essence is entirely Faustian. First, electrical energy is used to “mine” cryptocurrency by solving complicated mathematical formulas. All other currencies are connected — at least in theory — to a physical substance, be it gold or oil. Even the “monopoly money” of the decaying United States is based upon America’s credit rating, which makes it at least indirectly based on America’s GDP. While much of the GDP is tied up in abstract economic technologies such as insurance, capital gains, and so on, at its essence it is still reflective, at least in part, of hard, physical reality. Cryptocurrency, in contrast, is based on math, which is inherently abstract, and on electrical energy, which, even if it was initially derived from a physical substance such as coal or uranium, is still ultimately an invisible, numinous force.

Second, cryptocurrency makes great use of precise numbers with long decimals. While it does not use fully irrational numbers such as Pi, these numbers are very close to true irrational numbers, which are numbers that cannot be expressed as fractions. Cryptocurrency’s decimal-heavy numbers, such as 1.7761488, can in theory be expressed as fractions, but they are messy fractions. They certainly don’t feel like proper fractions of real objects, but more like abstract yet precise amounts of nebulous energy that are then crystallized and passed around through the ether.

Third, while cryptocurrency can be stored on physical devices that are not connected to the Internet (aka cold storage), and oftentimes are for security, many casual investors keep their investments online (aka warm storage). In both instances there is still a physical object: either a flash drive or such for cold storage, or a vast network of interconnected servers for warm storage. Nevertheless, the way that we interact with these physical items is as though they are entirely imaginary.

One could say much the same about online video games. There are still zeroes and ones being recorded on physical objects such as hard drives, but those zeroes and ones only truly come alive in the fairy world of the online, that enchanted realm which has come to overlay the waking world and, for better or worse, dominate it. If you doubt this, ask what a restaurant in 2022 can do without its Google reviews. Cryptocurrency, like video games, are dead in real space. They live outside of physical space, on the Internet and in the minds of its users. This fully reflects how the Faustian yearning for infinite space eventually transcends physical space into the infinite which is outside of space.

Fourth, for most cryptocurrencies, and not just their current owners but the history of their ownership, is stored for all eternity on the blockchain. This reflects the Faustian emphasis on time and history, which is only matched by the Egyptian sense of time as a monumental procession. Western and Egyptian cultures are unique in placing an inordinate emphasis on history and dates (this may explain in part why so many Western occultists feel drawn to the Egyptian tradition). Other than those who are Faustian, who else than an Egyptian would keep such an exacting ledger of history? We see this same Faustian impulse in English property law’s use of deeds, where record ownership of property consists of exacting detail of recording the who, what, and when, with the chain of title sometimes being traced as far back as 1066. Blockchain records are a cyberpunk equivalent of Egyptian stelae and English deeds.

But for all of its Faustian nature, cryptocurrency is being adopted as a rejection of Faustian economics, and perhaps even as an expression of a nascent Spenglerian culture. Many investors great and small have thrown themselves into this exotic technology due to a well-founded fear of hyperinflation, a desire for a more portable version of gold, and in many cases a defiance of the Federal Reserve’s dysfunctional tyranny. Many of us are turning to cryptocurrency as a way to bring in our economic harvest before the onset of a harsh winter. We know in our blood that the longer the summer, the longer the winter. We want stability, limits, slow but sustainable growth, and an economic cycle that is less extreme. Our adoption of it is in many cases not just for economic expedience, but also a subconscious, and increasingly conscious, rejection of Faustian economics — or at least of the regime.

That cryptocurrency is still rising in popularity despite its volatility and recent downturn, which was probably driven by inflation causing people to dip into their savings, shows that even normies have figured out that the old order is unsustainable. Bitcoin can even be purchased at gas stations now.

An upside to Faustian culture’s rapid disintegration is that it provides breathing room for a Spenglerian culture to develop its own identity. This avoids the resentment that inevitably results from dominance. Faustian culture has always admired Apollonian culture not in spite of their differences and distance, but because of them. Cryptocurrency is therefore more than just a useful tool to secure our capital and undermine the illegitimate regime. It is to be hoped that those who inhabit the coming Spenglerian culture will respect instead of resent their Faustian ancestors.