All They Wanted Was a Better Life 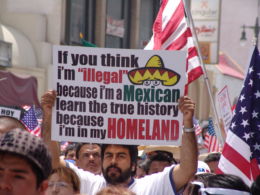 Liberals are convinced that all illegal immigrants want is a better life, but if you ask the Mexicans themselves, they seem to have a different point of view.

On Monday afternoon, amid a stinking-hot San Antonio June where over half the days have already topped 100 degrees Fahrenheit, 53 would-be illegal aliens died from heat exhaustion after being trapped and pressure-cooked in a tractor-trailer where temperatures reportedly reached 150 degrees. It was the largest mass death from human smuggling in American history.

Since fraud, deception, and fake ID is integral to the people-smuggling business, police are still having trouble identifying the victims. Forty of the deceased are male and 13 are female. Twenty-seven are from Mexico, seven from Guatemala, and two from Honduras.

Available details are sketchy and often contradictory, but as far as I can piece together the facts, police were alerted around 5:50 PM when someone along Quintana Road in San Antonio — an industrial area pockmarked with scrapyards that’s known as a common “drop-off point” for illegal migrants coming into the country — heard howls coming from the parked semi truck. The back doors were partially open, and apparently bodies were strewn for blocks as migrants threw themselves out onto the ground while the truck was still moving rather than endure a certain fate of being baked to death.

You’re not supposed to open up a truck and see stacks of bodies in there. None of us come to work imagining that. . . . The patients that we saw were hot to the touch . . . no signs of water in the vehicle or visible working AC inside. None of these people were able to extricate themselves out of the truck, so they were still in there awaiting help when we arrived. Too weak in state to actually get out and help themselves. . . . The heat was torrential. There was no air in that vehicle. There was no water. . . . They suffered. They lost consciousness and then they ended up dying.

It is thought that the passengers crossed over the American border on foot and boarded the truck in Laredo, Texas. According to officials, many of the victims had been sprinkled with steak seasoning “to mask the scent of human cargo and evade canine detection.”

Police suspect that the truck experienced some sort of mechanical malfunction, causing the driver to park it, escape into a nearby field, and leave all his passengers behind, dead and alive. Officials have arrested 45-year-old Homero Zamorano, whom they claim was “very high on meth” when apprehended. Zamorano is a Houston-based American citizen and is currently in federal custody.

This was not the first people-smuggling tractor-trailer heat-exhaustion mass-death incident in Texas. In 2017, only about four miles from the current incident, ten people died from heat exposure and asphyxiation inside a tractor-trailer in a San Antonio Walmart’s parking lot. In 2003, 19 people died after being stuck inside an unrefrigerated dairy truck southeast of San Antonio — it’s said that victims clawed at the walls in vain as temperatures reached 170 degrees Fahrenheit inside the trailer.

It’s also an international phenomenon. In late 2019 in Essex, England, 39 Vietnamese migrants were found dead inside a truck trailer.

In 2009, 35 Afghan migrants suffocated to death inside a shipping container in Pakistan.

In 2008, 54 Burmese migrants died inside a seafood container in Thailand.

In 2000, “58 corpses slumped behind crates of tomatoes” were found in a truck headed into Dover, England.

And in what appears to be the biggest people-smuggling-container-death atrocity of all, 71 Afghans, Syrians, and Iraqis were found dead inside an abandoned truck near Vienna in 2015.

It’s all so sickening. By now we should all know that no human being is illegal, no matter how dead they may be.

And no one deserves to be killed when all they wanted was a better life:

“This is nothing short of a horrific human tragedy….There are, that we know of, 46 individuals who are no longer with us, who had families, who were likely trying to find a better life.” — San Antonio Mayor Ron Nirenberg

“Many individuals who consent to being smuggled are escaping poverty and hardship, seeking opportunities and better conditions abroad, or escaping natural disaster, conflict, or persecution. Others may be seeking asylum. As such, perhaps the only generalization that can be made about smuggled individuals is that they are all on a quest for a better life.” — Wikipedia page on People Smuggling

“Let us pray together for these brothers and sisters who died following their hope of a better life; and for ourselves, may the Lord might open our hearts so these misfortunes never happen again.” — Pope Francis

When did everyone stop caring about “a better life” for the people who are already here?

Can you kindly explain to me how the constant influx of uninvited Mesoamericans who speak a different language and who are largely convinced that they are reclaiming land that was stolen from them makes life better for me?

Why can’t these interlopers carve out a better life where they’re from? Isn’t it racist to assume they can only have a better life in a majority-white nation? I thought racism was wrong . . . right?

When your entry into the country involves an elaborate series of crimes committed with the aid of powerful and intricate criminal syndicates, that doesn’t bode well for your future as a civic leader.

Maybe if they’d spent the last 10,000 years figuring out how to do more than shrink skulls and dig yams, they wouldn’t need to move to another country in search of a better life, you know?

Anyone else think we already have enough people in the country, legal and otherwise? I’m reasonably certain we already have more Mexicans than we will ever need. To be frank, I’d feel like a complete asshole loser if I paid to have myself smuggled into Mexico.

Statistically, exactly how dangerous is it to be smuggled into the United States from Mexico? Although we’re warned that “Death is a constant risk for undocumented migrants entering Texas,” this doesn’t seem to be the case. About two million unauthorized migrants crossed the border from Mexico into the US in 2021. A mere 650 or so of them died in the crossing. Given the furtive and entirely criminal nature of the enterprise, that doesn’t sound very “constant” at all. Those are pretty good odds. That’s less than one death for every 3,000 illegal crossings. Even more importantly, the roaring majority of the deaths seem to come from things such as drowning and hyperthermia than being gunned down by Border Patrol agents.

As morbid and grisly and sordid as Monday’s incident was, a case can be made that it was a statistical outlier and that illegal immigrants are far more dangerous to naturalized citizens’ quality of life than the inverse.

For all that we’re supposed to feel sorry for these little brown intruders because they’re coming from Third World countries, we’re never told that perhaps the real problem is that they’re Third World people.

If they’d had the good sense to stay south of the border, none of this would have ever happened.