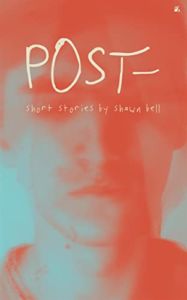 Other than calling his work “dissident fiction,” it’s hard to categorize Shawn Bell’s short stories. In his recent Antelope Hill collection, entitled Post—, it’s mostly their cutting insights into the insidious façade of globalism — and their tremendously high quality — which link these stories together. Within Post— we have elements of dystopia, coming-of-age, romance, alternate history, family drama, tragedy, and the slice of life found in the faded Houckian suburbs of the American Midwest.

Bell has clearly mastered his craft as a fiction writer, combining smooth, perceptive prose with a wide array of unique and realistic characters to provide one gripping story after another. I couldn’t put this book down, breathlessly ending one story just to start again on the next. If you’re looking for short fiction which accurately captures the zeitgeist of twenty-first century White America, then you cannot do better than the ten stories found in Shawn Bell’s Post—.

One of my favorites is “The Blue Mountain Trust,” a story of a young man haunted by how he continually “squanders” (a word of significance in the story) his patrimony. Being a rootless, directionless — yet intelligent and sensitive — American white, he seems to always cut himself off from his past. This nags at him until he stumbles upon an old man who lives in a handmade cabin on the side of a mountain. There he learns about identity, man’s connection to the land, and the near-dead American pioneering ethos. Upon the man’s death, however, the younger one uncovers a secret which not only radically changes his life but places him face-to-face with the juggernaut of anti-white globalism. He must contend with a fascinating moral quandary, and the story’s ending is both black-pilling, and not.

“The Last Rhodesian (Or, Thumos Calling)” unsettles the reader before it even begins. Below the title we see the following quote: “Screw your optics, I’m going in.” This, of course, was the last thing Robert Bowers posted on Gab before he shot up the Tree of Life Synagogue in Pittsburgh, Pennsylvania on October 27, 2018. The story title itself is replete with meaning: We all know about the dire things which happened to the White Rhodesians after the blacks took over in 1980 and renamed their nation Zimbabwe. And for those of us who don’t know, thumos (or θυμός) is an Ancient Greek term meaning “soul” or “spirit.” It is a term used often on the Right to describe the self-affirming attitude which the ancients had and modern whites lack, for the most part.

So after all this unpacking, which only a dissident can do, we get a story about a disaffected white man who takes the “Call of Thumos” quite seriously. He stockpiles weaponry and mentally plots heinous acts of terror. More importantly, he understands why such a militant stance against today’s status quo might one day be necessary. He understands the anti-white, genocidal attitude cherished amongst our elites, an attitude which all but outlaws thumos and puts severe restrictions upon man’s rational capacity, known in Ancient Greek terms as logos. All that remains is eros (and we all know what that is). Feeding eros as well as all other materialistic desires is what reigns supreme in our anti-hero’s modern American society:

There are, of course, a number of purported solutions to the combustible and endemic alienation of this young man’s unsociety. In particularly intractable cases, one is encouraged to rationalize away the storms of one’s passion, one’s Achillean wrath, by “talking things out” with a “trained professional,” and by medicalizing what is in fact an organic and righteous dissatisfaction with the manner in which Life has been nerfed and restructured into something that may suffice for rabbits or women, but not and never for a man. “Imagine a society that subjects people to conditions that make them terribly unhappy, then gives them drugs to take away their unhappiness.” And when medicalization and psychologization, inevitably fail, never fear: a steady diet of Netflix and craft IPAs will do the trick. Heroin is preternaturally effective as well.

So how is this wrong? And how is it wrong to rebel against a degenerate society like this?

The plot of “The Last Rhodesian,” however, deals with a real-life friendship the anti-hero has with a normie friend (“a dude he’s known since grade school”) and how they both find solace in nature, two themes which run throughout Post—. This friend may sympathize with our anti-hero but is so weighed down with typical responsibilities — a wife, job, debt, and a special needs child — that he can’t bring himself to hear the call of thumos. Or perhaps it’s the innate balance of his personality which “predisposes him to phlegmatic practicality.” In either case, it makes us wonder if what they have in common will eclipse what they don’t, and ultimately pull our anti-hero back from the brink, where his unbridled thumos is leading him.

I have never read fiction which employs such a novel conflict. Raskolnikov and Razumikhin, perhaps? Yeah, it’s like that.

Post— also takes us to Eastern Europe in several stories. The striking dystopia of “Advent” involves maladjusted kids in an unnamed Slavic nation where there may or may not have been an alien landing. “Poverty and Plenty,” is a sad anti-love story which stretches from today’s Midwest to the turbulence of 1990s Yugoslavia. And “Rescuing Nadezhda” features a Jewish journalist who travels from an alternate-history Galicia into a Poland which may be our own.

The most powerful story for me, however, is “Of Mothers and Witches,” one so comprehensive and powerful that, if I were King of the Right, I would make it required reading for dissidents. It flips the script on “The Last Rhodesian” by making the narrator, named Matt, the normie, and his friend, his cousin Danny, the race-aware loner. In this case, Matt recalls a story which Danny once relayed to him — which Danny’s father had in turn relayed to Danny as a child — about something that had happened during their childhood in Ohio. It was a horrific event which irrevocably warped the mind of a woman they both knew as children, and this event, imperfectly retold by Danny’s father, has had profound repercussions which both Matt and Danny are still feeling as adults — especially Danny. Of Matt’s entire extended family, only Danny chose to remain in their hometown. It’s not the thriving community it once was; like many middle-American towns, it’s suffering from economic stagnation and immigration. But Danny perseveres.

But at what cost? Matt discovers what cost indeed while alone in Danny’s house during a visit, perusing his library. He knows that his cousin has been radicalized — or, as Danny would describe it, he has finally embraced the “the Old Wisdom.” This was the Old Wisdom that his old man could have imparted to him when discussing the Horrific Event so many years ago, but he was instead distracted by a hockey game on television. Matt recognizes what this wisdom is, realizes that it has departed from his and Danny’s world, and laments the void of its absence.

Matt is repelled and leaves shortly afterward, disconcerted and laden with doubts. Why has the Old Wisdom died? What went wrong? As he attempts to answer these questions with socially-accepted boilerplate (for example, the death of religion or the rise of materialism), he hears Danny whispering in his ear:

“. . . and who led the charge against public displays of religion in American civil society, Matt? Who promoted the twin towers of soulless materialistic political economy: neoliberalism and communism?”

Danny, of course, knows the answer. Matt is afraid he knows it as well, and this sends him spiraling into a sea of uncertainty and towards one of the most chilling and thought-provoking story endings I have ever read.

And I am very hard to please.

Post— is nothing less than a great accomplishment — not just for Right-wing literature, but for literature in general. It is dissident fiction, but it is not political, nor is it reactionary, ideological, or propagandistic. Instead, it is a series of deeply perceptive narratives which deal with some of the most profound issues of our day; some of these accounts are more fanciful than others, some are broader in scope, and some are downright enigmatic. But in all cases, these stories are riveting and unforgettable. They will serve as a time capsule of a dying civilization and help sow the seeds for an eventual rebirth.