The True Face of the Feds 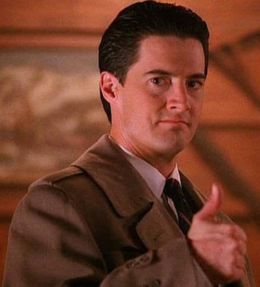 There are many reasons to like Twin Peaks. Personally, I like the cozy aesthetic, the gentle color palette and soundtrack, and the mild way in which the first season is paced. It is a good show to drift off to sleep to, and goes great with a soft bed and someone special to snuggle up to. To view it in the daytime seems obscene to me.

I was late to start watching the show; I believe I started in January of 2021. It wasn’t “the greatest show ever,” as others hyped it to me. Maybe I was underwhelmed because I wasn’t there in the early ‘90s when it was unfolding. Maybe it was the 30 years of buzz about it. Nothing could possibly live up to that. I am, however, aware of two distinct reasons why I disliked the show from the very first episodes. The first was that it wanted me to sympathize with the town bicycle. The other was that it wanted me to root for the FBI agent.

I could write my Ph.D. thesis on how American media glorifies female promiscuity for the express purpose of glamorizing the promiscuous female’s life, but something else has been bothering me about the series in these trying times. When we think of the FBI in these circles, we think of bad-faith actors trying to frame and entrap dissidents. We think of agents pretending to be friends on the Internet. We think of evil men who skulk in the shadows and offer to sell us unregistered firearms for the purpose of committing terrorism. We think of cognitive infiltrators dispatched to poison discourse and sow division. But that’s us, and we’re a kooky bunch. I wouldn’t be surprised if Kyle McLachlan’s million-dollar smile and boyish good looks come to mind when most people think of the FBI. To them, they are not the enemy’s goons, but rather friendly, mildly eccentric policemen who operate at a federal level in defense of the law, hunting down murderers, Mafiosi, and terrorists – i.e., protecting Our Democracy.™

The reality is different. The FBI is the American republic’s counterintelligence agency. On paper, this means that it is tasked with disrupting foreign intelligence operations within America and attacks on America’s own intelligence networks and agencies, among other things. In practice, this means that they act as the state security agency (even though the US and other Western nations often claim that they have no StateSec), swatting down every political threat to the Republic. These can range from Islamic terrorists to certain factions of the Dissident Right. Anyone who is deemed a threat to America’s political configuration is an enemy of the state’s security, regardless of how liberal, open, and pluralistic the American state claims to be.

While violent groups of course have priority, given that the FBI is — on paper, at least — merely a law enforcement organization, all entities which oppose the current regime will find themselves on the state security’s radar, monitored, followed, infiltrated, harassed, and their finances hampered. Regimes defend themselves; the creature from Washington is no different, and like the Stasi before them, the FBI are the sword and shield of the Party.

And yet, the Stasi never attempted to present themselves as just friendly policemen, or if they did, their attempts were not recorded. Neither did the Russian NKVD. But here we have Twin Peaks trying to convince me that the FBI consists of all-American heroes like Dale Cooper who won’t rest until they’ve solved the grisly murders which plague small logging towns. Numerous other media portray the FBI as heroes, but Twin Peaks feels especially egregious, probably because Kyle MacLachlan just looks and acts so damned wholesome. In any other totalitarian regime, we’d recognize this as obvious propaganda. Comrade, it’s obvious that the KGB consists of nothing but good and patriotic men who protect our glorious Motherland from the decadent capitalist Black Lodge! I read it in the morning Pravda. They wouldn’t dream of violating your rights in order to boost arrest numbers!

America’s state security would like us to think they look like Kyle MacLachlan, but reality doesn’t bear out this (self) representation. Instead, they look like Peter Strzok, grinning creepily as he’s being questioned about illegally spying on Donald Trump’s 2016 campaign. Strzok is indeed creepy, but he’s just the tip of the iceberg. We will only really know the full extent of the FBI’s evil once the enemy is defeated and their archives are opened to the public, but I’m expecting more than one Beria to be lurking under their carefully cultivated surface. Having worked hand-in-glove with Hollywood and the media for its representation in fiction, the FBI depends on this image in order to ply its trade. Americans trust the FBI if they believe it is an organization of Dale Coopers hunting criminals. They’ll cease trusting it and make its mission all the harder if they start associating it with totalitarian regimes’ state security agencies.

It is said that the Trump presidency’s biggest victim was trust in the media. This may be so, but far more consequential in the long run may be the damage the FBI’s reputation suffered when its role in the Russia collusion hoax emerged. Furthermore, as more and more evidence emerges that the FBI is actively involved in hunting down American patriots (along with White Nationalists and other dissidents), this reputation will further degrade until it is replaced by a new one: that of the counterintelligence and state security service of an evil empire, thugs dressed in black harassing civilians for verbal delinquencies, their ears perking up whenever they hear “White lives matter” or “Let’s go, Brandon.” We can expect the Bureau and its confederates in Hollywood to try and repair its reputation, but the propaganda apparatus is itself very old and creaky — definitely not what it used to be in the early ‘90s.

I’m not singling out the FBI. Rather, all domestic security intelligence agencies, and even those that aren’t supposed to be domestic (but act domestically anyway), are guilty of such behavior. Even “our beautiful military” gets in on it; most of the slimeballs trying to cognitively infiltrate the radical Right have a background in military intelligence (see Jack Posobiec) and often work with the Mossad and other private actors from the mammon-worshiping (right) wing of Globohomo. Their image has likewise been sanitized in Hollywood as heroic protectors of the American people. 24, NCIS, Stargate — these all exist, among other reasons, to showcase the US military and intelligence agencies as heroic organizations staffed by heroic individuals instead of the nests of corruption, incompetence, and downright evil they really are. These idols all have to fall if we are to win.

When the history of the twentieth century is revised for accuracy and expanded to include the history of our own time, ours will likely be known as the era of the counterintelligence state. Intelligence agencies in the modern world correspond to Carl Schmitt’s sovereign: They operate in a permanent state of exception and often decide when the exception is to apply to the rest of society and the government. Regular laws do not apply to them, and the unlimited power for extrajudicial surveillance which they possess gives them unlimited blackmail power over the government that nominally commands them and oversees their activities. It is the intelligence agencies vying for power, both within a state and between states, that is the foundation of deep state politics. For this reason, the erstwhile dissident is forced to think like a spook — even though he may be something else constitutionally — if he is to think of matters of state in the modern world.

What’s very interesting to me is that of all the players on the stage, only one set of spooks has taken the trouble to present themselves to the world and the public which they rule as good, benevolent enforcers of the law. The Russian Federal Security Service (FSB) make no bones about what they are to their public. Why are the FBI, CIA, and military intelligence so anxious to look like the good guys to the American people? They have invested a lot in this image of themselves, and they’ve been steadily losing it for the past four years. Maybe this will lead to what the kids like to call “mask off,” where they’ll start acting like the thugs they always were — but personally, I doubt it. The mask they were wearing is the chief method by which they operate, and without it, they’ll lose their mojo and flounder. We may be seeing, for the foreseeable future in America and possibly the rest of the Western world, something not seen before in the era of the counterintelligence state: counterintelligence anarchy.

« Focus on Birth Control, Not Elections