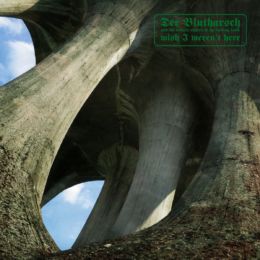 The Austrian band Der Blutharsch will certainly be familiar to Counter-Currents readers, whether through their neofolk influences, distinctive music, or musical collaborations. The latter include their 2003 split album with the classic Italian fascist rock band Zetazeroalfa, and their 2008 split album with the Italian experimental nationalist band Sottofasciasemplice.

In the 1990s, singer Albin Julius first made a name for himself when he created the darkly medieval musical project The Moon Lay Hidden Beneath a Cloud with his then girlfriend, Alzbeth. He began performing as Der Blutharsch in the mid-1990s, concurrently with his former project until it was concluded in 1999, and then continued under his new name throughout the 2000s. Today, his main project is presented under the very long name of Der Blutharsch and the Infinite Church of the Leading Hand, which he has been using since 2011 (which will be referred to simply as Der Blutharsch in this review).

About a year and a half after their last release, What Makes You Pray, Der Blutharsch returned with their new album, Wish I Were Not Here, which they realized together with the White Hills.

I’ve seen Der Blutharsch several times in the Czech Republic, most recently at their very successful concert in Prague on April 13, 2019, and also at a less successful performance at the experimental festival Hrady Samoty VIII in 2018, where frontman Albin Julius got drunk and played a harder set, mainly from the 2016 album Sucht & Ordnung. He also performed some improvised black metal. Two years before that, they played a more intimate concert in Žižkostel. Albin has a very warm relationship with Czechia, and not only for concerts. He enjoys visiting and experiencing Czech culture, as he himself has stated:

First of all, I must mention that I have Czech blood in my veins. My family is originally from Jihlava, so my surname is Martinek. My grandfather moved to Vienna before the First World War to work as an Imperial gardener. So I’m related to your country by blood.

Pan Tau,[1] for example, was one of my childhood heroes, and I loved Czech fairy tales just as much. I fell in love with them back then, and I still love them. The first time I was in Brno was shortly after the borders opened, and since then I have been there regularly, two or three times a year. I love the charm that your country has: the food, the atmosphere, and also the fact that everything is still much more original there than here. Prague is my favorite city in the world, but I love that in the Czech Republic I can wander into a completely unknown small town and discover absolute treasures there. I’m also a huge fan of Jan Švankmajer[2] and a whole host of other Czech artists.

Those readers who are only familiar with Der Blutharsch’s early, more martial-industrial work should now take heed, however. The whole project has moved on, and not only musically. I noticed the newer face of the group already on the Joyride album in 2015, but some of their earlier experiments also hinted that the band would not follow the path taken by Triarii or Legionarii, i.e. the path of totalitarian martial music. Since 2005 they have been getting closer and closer to dirty psychedelic rock and frequently reference Krautrock, which is also the case with this album.

Ideologically, Der Blutharsch cannot be considered extreme. Rather they are just “casually” flirting with an “extremist” image. Albin Julius gives his take on the music in the following statement, and it should be added that he deals similarly — or rather, does not deal — with ideology. He is simply a showman. He likes to entertain himself and to create entertainment, as he said in the same interview:

We do things the way we want to do them, and we don’t really think ahead about what the outcome will be. So it could actually be another link to our old work — the fun of making new things. I’m also surprised sometimes when people tell me that they hear elements of the older Der Blutharsch in our new work. But maybe it’s also because I don’t listen to the old stuff much myself. I’ve been listening to some stuff recently (we’re planning to re-release some stuff on vinyl) and I’ve been surprised myself at how psychedelic some of the old martial stuff sounds.

After the album‘s slow but ominous opening song, “Evil,” with its unforgettable female vocals backed by a twangy psychedelic guitar, the album’s title track, “Wish I Weren’t Here,” follows. The track is the longest one on the entire album at 6:44. It begins with a slow, screeching build-up, heard as if from a distance. What follows is a mesmerizing voice and a slow rock ride, a creative music of constantly evolving motifs. “All One” represents a momentary respite from the heavy psychedelics, and a short-lived enchantment with kissable tones prepares the listener for another rock ride in “Make Me See The Light,” which is reminiscent of the old ZZ Top.

Why, you ask? The next song will answer you: “Just Because I Can.” You can be angry and disagree with Der Blutharsch‘s new direction, but that’s just the way it is. I’m still enjoying the new music even halfway through the album, so I’m anticipating what else they’ll surprise me with.

Then, the music degenerates into a slight cacophony accompanied by the singer’s shaky voice in “My Soul Rests Low.“ But the next song doesn’t let us rest for long, and we are treated to the musically faster and easy to remember rhythmic “Forgotten.” This is followed by the typically rock-sounding and straightforward “He Is Here.” We come to the end with the sadder and slower “O Lord.” For me it is a great ending, and the songs hold together well. The abstract-looking graphics remind me of the Sagrada Familia, adding a touch of originality to the whole thing.

I can imagine the album being great to hear live as the basis of a Der Blutharsch set, since especially in clubs their music evokes an incredible atmosphere.

[1] The main character from a very bizarre and surreal Czech children’s television series from 1971 that referenced the French artist René Magritte in its main character, Pan Tau.

[2] One of the best Czech directors, it is definitely worth seeing his surreal and alchemical films such as Alice (1988), Faust (1994), Lunacy (2005), and others. Unfortunately, he ended his career as a director in 2018 with the not-so-good film Insects.

» Counter-Currents Radio Podcast No. 405 The Best Year Ever Extravaganza on The Writers’ Bloc