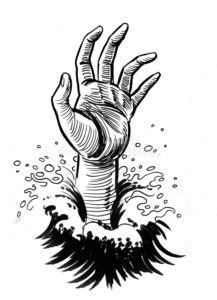 “We must all hang together, or, most assuredly, we shall all hang separately.” — Benjamin Franklin

Race-conscious whites believe that our race as a whole is too individualistic compared to other races. We would do well to cultivate a feeling of white solidarity and brotherhood. This sentiment should be even stronger among race-conscious whites, lest we offer the world the absurd spectacle of a movement that preaches white solidarity but in practice is polarized by sectarian wedge issues and petty personal rivalries.

But we have to be careful here. Too much solidarity can be a bad thing. For instance, we all recognize that black solidarity with their own criminals is pathological. Blacks regard law and order as alien and “white,” which is true. Thus they stigmatize “snitching” on black criminals to the police. They also riot when black criminals like Trayvon Martin, Michael Brown, Ahmaud Arbery, George Floyd, etc. have unhappy encounters with law enforcement or armed victims.

This behavior makes it easier for black sociopaths to get away with crimes. In fact, the black sociopaths’ advocacy group known as Black Lives Matter has been so successful at discouraging police from patrolling black neighborhoods and arresting black criminals that black crime is now soaring. Black criminals generally choose black victims. Thus many blacks are paying with their lives for their mindless solidarity with black criminals. Black solidarity with their own criminal element is a form of self-destructive spite. It seems that blacks hate white people, especially white cops, more than they love themselves.

If you make wrongdoing safer, you’ll get more of it. This is the meaning of “moral hazard.” Usually, moral hazards involve forcing other people to pay the costs of an individual’s bad decisions. For instance, if the government bails out lenders, they will take more risks. Obviously, a well-run society creates incentives to reduce rather than increase bad decisions. The same is true of a well-run movement. This is why we have to be careful of appeals to solidarity.

Unconditional solidarity with the wrongdoers among us is a moral hazard.

We should not extend unconditional solidarity to race-conscious whites who harm other members of our movement. These harms can range from promoting bad ideas and having bad manners — which should be called out and criticized, preferably with better ideas and better manners — to treasonous behaviors like doxing and snitching to our enemies, to outright criminal behavior. If solidarity is important to us, then we should feel solidarity with the victims.

Nor should we extend unconditional solidarity to whites — whether movement members or “normies” — who harm other members of our race at large. There are misanthropes in our cause who don’t “love white people.” They look upon white “normies” merely as raw material for their megalomaniac fantasies. But they’ll still appeal to normies for white solidarity when it is convenient. Even a whiff of such sociopathic elitism is deadly for a populist movement. If solidarity is important to us, then we should reserve it for the vast majority of decent white people, not anti-social misfits who prey upon them.

Finally, we should not extend unconditional solidarity to whites who commit crimes against other races, for instance, terrorists like Brenton Tarrant. Even our enemies have basic human rights. But even if you deny that — even if you profess to care only about white people — whites like Tarrant also harm our movement and our race as a whole.

It is, of course, natural to feel greater affinity with race-conscious whites than for “normies” or non-whites. But we cannot lose sight of our larger goal. The purpose of white identity politics is to secure the existence and well-being of our race as a whole. That is the standard by which we must judge one another. And when a conflict emerges between members of our cause and white well-being as a whole, solidarity with our race as a whole should win out. We must always choose the greater good.

Now let’s apply this to some concrete questions from readers. First, in response to an article criticizing Nick Fuentes, one reader cited Benjamin Franklin’s remark when signing the Declaration of Independence that “We must all hang together, or, most assuredly, we shall all hang separately.” Second, a reader asked whether people in the movement should “bury the hatchet” and pull together to support the white advocates who have been targeted for lawfare for participating in Unite the Right in 2017. A third reader wants to help Jason Kessler’s defense in the Charlottesville trial, but he regards some of the other defendants as bad people, to whom he wouldn’t lend a hand even if they were drowning. He wonders if helping Kessler is right if it also helps bad people in the process. All three of these issues are related to the question of solidarity and moral hazards.

Let’s deal with the Fuentes question first. Nobody in the movement is above criticism for bad ideas, bad decisions, or bad character. Suppressing criticism in the name of solidarity creates a moral hazard. It creates an atmosphere in which bad ideas, bad decisions, and bad characters flourish. But we can’t afford that. Our cause is too important, our enemies are too powerful, our ranks are too small, and our time is too short.

However, when people like Fuentes are attacked by our enemies for being courageous and effective in advocating sound ideas — for instance, when he was deplatformed from Twitter and YouTube — then of course we should give him moral support at the very least. In such a case, doing nothing would itself create a moral hazard, since it would both decrease the likelihood of right action in our quarters and encourage wrongdoing among our enemies.

There were plenty of problems with Unite the Right. There were some terrible people, terrible ideas, and terrible optics. I know what is coming in the trial. I know that we will cringe with embarrassment at the testimony, depositions, emails, forum posts, and text messages that will be offered as evidence and broadcast to the entire world.

The same is true of the post-Charlottesville lawfare directed at the march’s organizers and participants. They are not being attacked for what you and I might reject about their ideas and behavior, but for the things that we all agree with. Thus, the attack on them is an attack on all of us. So we all need to fight back. Thus, we should set aside our differences — since those don’t really matter here, anyway — and we should offer them moral support, at the very least.

As the trial progresses, some of the defendants will make us proud. But we will also be confronted with statements, actions, and personalities that we cannot defend and that you will be asked to disavow. But hold the line. It is not illegal to be evil-minded fantasists and foul-mouthed jerks. It is not illegal to be an asshole. All the defendants, good and bad, are on trial simply for being white advocates. Make very clear that your support is not a blanket endorsement of the marchers — how could it be? — but simply a defense of their constitutional rights, as well as the basic principles of white racial activism, namely that white people are under attack, and we have the right to take our own side. On these points, at least, Unite the Right did nothing wrong.

Just as solidarity with wrongdoers within our ranks creates a moral hazard, so does a lack of solidarity when our people are persecuted for doing the right thing. If we use such attacks as occasions to air internal grievances rather than to pull together and counterpunch, we will simply encourage more sleazy legal harassment. Thus I wish the Charlottesville defendants the best. If they win, our cause will be a bit safer from lawfare. If they lose, we can only expect more of the same.